I can write a book and keep blogging but I can’t engage head on with business in Turkey and keep blogging, which explains the recent gap in the blog posts as I wrestled with finance, restructured my company here and generally rigged my life for financial storm running.

This post is going to be long, and tedious, and it’s about stuff like finance and money and pensions, feel free to ignore it as no goats get mentioned and the only weather talked about are the storms in the financial markets.

Early this year Nick and I decided we were going to move to Spain, I wanted to be closer to my parents who spend most of the year in Andalucía and we would also be within an easier flying distance of my daughter in Wales. Well, BMI pulled out of our local airport in Wales, my parents continued to be robustly fit as fiddles and the storm clouds of economic uncertainty gathered over Europe and so we thought long and hard about things and decided to stay in Turkey. As beloved husband used to say, “Better the devil you know!”

When Leyman Brothers sank beneath the slick oily tide of the bad debt rising back in 2008 I was still, technically, insane with grief. Phil had died six months previously and whilst he and I had seen what was on the horizon long before then I was in shut down mode and couldn’t face making decisions about anything, that apathy was probably a good thing, because I did nothing, for years. I sat and waited and watched from my little village as the world went weird and the financial markets, always emotionally lead, went into the kind of hysterics you associate with X-Factor on a Sunday night. And Turkey stayed out of it all.

There was a downturn here but it was small and short lived compared to other countries. There was a lack of British and Irish buyers in the holiday homes markets but that was no bad thing as it sent the weak and inexperienced companies that were targeting them crashing out of the sector leaving more robust ones (although there are some chickens from that time of mad buying still waiting to come home to roost!). The domestic market for property remained strong during 2010/11 which is far more of a key indicator than any expat’s economic injection no matter how important they think they are, but growth is expected to reduce next year on the back of the increased mortgage rates to curb spending and rising construction costs.

By early 2011 the Turkish economy was booming, too much in fact, and there was a sharp spike in personal credit as the new mortgage laws impacted and the use of credit cards increased. Growth was so sharp that there were worries of an overinflated economy and steps were taken, sensible ones actually, including a ban on cash withdrawal from credit cards unless a sufficient balance was paid off each month and a concerted effort was made to reduce unsecured credit. The lira began its graceful downward slide in the summer to boost export trade and by September the economy looked to be on track for a 5-6 percent growth over the year, down from the scary over inflated 11 percent growth the first quarter predicted.

There are weaknesses in the Turkish economy; inflation is an issue, rising indirect taxation, particularly on fuel, puts pressure on basic costs and the large current account deficit is an ongoing cause for concern. You see, basically Turkey is trying to slow its growth, but that’s hard, because people like spending and a managed slowdown feels counter intuitive to both business and people who want to make hay whilst the sun shines. Putting the brakes on an economy is tricky but with the stark reality of boom and bust plain to see right now in Europe and America it reinforces what the Central bank is trying to do.

What did all this mean for us? Well compared to the UK where overall our pensions were reducing and savings stagnating Turkey looked like an arena that could grow our money rather than reduce it and the banking system gave us more personal choice over our investments and the ability to react quickly to economic trends. Moving the bulk of our finances here meant exposing ourselves to the fluctuations of the Lira should we ever decide to move on but with the lira trading at its weakest point to sterling in the last six years there was a safety valve there.

We thought about things all summer and then in September with the European forecasts increasingly gloomy and the governments continually kicking the Euro debt can down the road I had a Macbeth moment and cried “If it were done when ’tis done, then ’twere well it were done quickly”, which probably isn’t the best of omens but decision made we moved stuff; pensions and savings and anything liquid came to Turkey.

This is where the bank bit comes in. Banks in Turkey are user friendly, their online banking is brilliant, security is robust but sensible and the flexibility they give you in terms of managing your money and investments is excellent and we wanted that more than anything. Management fees on private pensions are very low and investment options are numerous and you can change your set up six times a year with no charge. There is no charge to bring your pension here and no set up fee and if you are still some time off pensionable age (say early to mid forties) then tax wise you can probably save a lot and access your funds sooner.

Through our bank accounts here we have access to foreign currency accounts that allow us to move our savings around to take advantage of fluctuations in exchange rates. We can buy and sell currency at rates which are very close to market rates and are constantly updated – everyone here knows the current Lira, Dollar, Sterling and Euro rate, all the time! We can buy and sell mutual funds and shares online, trade in gold and commodities and bonds, all from our online banking screens. For control freaks who like to be in charge of their own destiny it’s a good thing.

If you want advice there is plenty around, our local stockbroker, a charming young man who swops English slang for market tips is always at the other end of the phone to discuss stuff and even should he move branches, as is normal here every few years, he will still be available to us.

There are a few downsides to the banking systems but they are minor gripes. One of the downsides is loyalty isn’t really encouraged which can mean swopping banks regularly and learning a new system if you want to get the best rates. Certain sneaky little charges are starting to creep into the account running; Garanti are adding sly little charges to EFT’s and money transfers that weren’t there before and sometimes they forget to tell you. Certain facilities are only open to you if you have a Turkish identity number which can only be obtained by having a resident’s permit. But overall, there is little to complain about and the freedom to choose how to manage your money feels nice.

What happens to Turkey if the Euro collapses? It will suffer, there are no two ways about it, Europe is Turkey’s biggest customer and over recent years Euro loans were popular with business as they offered lower interest rates, so if the Euro collapses there will be financial turmoil both in the export markets and domestic markets. It will hurt. But maybe not so much as Europe will hurt and as hedging is a popular thing in this world today being in Turkey hedges me financially as much as my situation allows as the storm clouds continue to bank around Europe and nobody can agree where they put the umbrella, who it belongs to or even who should hold it over all our heads!

Is Turkey a safe harbour? Honestly, nowhere is truly safe, globalisation is a box you cannot close and all the evils that spilled from the Pandora’s Box of banking when they opened it up wide – mad things, like credit default swops – won’t go away, but at the bottom of every Pandora’s Box is hope, and I guess I have hope. I have hope in this country, in its dynamism and energy, and its huge untapped resources.

Recently Garanti Bank introduced a new online banking format, and right there on the dashboard is a thing called “Saving Goals” and you can choose an icon to represent what you are saving for – a car, a holiday, a wedding, university, a home – and that icon and your progress towards your goal appears on the front page of your banking. When I first saw it I giggled, it was so cute, and then I realised what a hugely powerful psychological reinforcer it was and I feel hopeful for a system that encourages people in that way, it’s a silly little thing, but it’s telling. 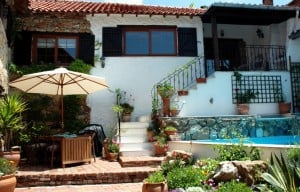