Last night I received an invitation it breaks my heart to turn down. Louis de Bernières, author of the beautiful Birds without Wings and the more famous Captain Corelli’s Mandolin (great book, lousy film!) is visiting Fethiye and Kaya Koyu for the afternoon on 1st May. He will be giving readings from his books, discussing his themes and signing books.

There are only 100 tickets available to the event and I can’t go because it’s the 1st May and my daughter will be arriving that night several hundred miles away. Dearly love beloved daughter but seriously heart broken to be missing meeting the author.

If you want to attend the event click the picture below for details or contact Gill Erdogan on 0535 494 75 06. Tickets are 50tl each and proceeds go to Fethiye Internation Group for the benefit of local children. 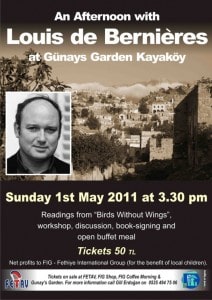 I read Birds without Wings (for the first time) whilst I was in Dalaman in 2005. It was a book so beautiful that I restricted the number of pages I read each day to make it last longer. With massive self restraint I managed to eke it out over a fortnight.

Set during the turbulent early decades of the 20th century it covers the fall of the Ottoman empire, the rise of Attaturk, the foundation of modern Turkey and covers the ubiquitous “population exchange” of 1923.

For all the historical detail it includes and the huge events it covers the image which stays with you long after you finish the book is that of the multi ethnic village life of Turkey before the first Great War, where Greek and Turkish, Muslim and Christian villagers lived companionably side by side before the world made them change.

Ostensibly set in Kaya Koyu, the old Greek/Turkish village by Fethiye and which is now a UNESCO World Heritage site it could just have easily been set here in Kirazli. Kirazli has the same feel, the same type of setting a little inland from the coast, the same history and the first day I ever saw the village it reminded me of Birds without Wings.

For me, personally, the book reverberates into my life here in Kirazli. When I first came here I bought an old Greek police station abandoned since the population exchange; whenever I have renovated an old house the village men have gathered around, keen eyed, looking for the gold the Greeks left behind when they were told to leave at short notice; and whenever I have to go to Izmir (still known as Smyra in the book) I shiver for the poor souls lost beneath the waves of the harbour as they threw themselves into the water to escape the great fire of 1922.

Apart from being beautifully written and a joy to read Birds without Wings taught me so much about Turkey and prepared me for life here in Kirazli and gave me the historical background which puts life here now into context. It is as relevant to here as it is to Kaya Koyu, maybe even more relevant to here as Kirazli is still a living growing village moving on from those turbulent days. It didn’t become a ghost village like Kaya Koyu, it moved past that, but the echoes of the Greeks remain and the village remembers and now again, 90 years later, Muslim and Christian live here side by side.

If you have the opportunity to go to Kaya Koyu and meet the author, please tell him “thank you” from me, he gave me insight, and his insight helped me live here, and that’s a really big deal to me.