11th October 2011. Here is a quick update for those of you finding this post through a “storms in Turkey” search on Google.

We’ve had torrential rain here on the Aegean coast for the last three days. The worst flooding has been inland in Milas and Mugla and down in the south but there has been some damage on the coast due to very high winds from Cesme down to Fethiye.

Here in Kirazli we have had some damage around the village and a couple of collapsed walls on old stone houses, all empty ones, as the dirt that holds the walls together finally washes out. Very sad, as I hate to see the old houses go, but they are so expensive to restore and renovate and you can understand why it happens.

Yesterday we had probably six inches of rain in a few hours, it really was torrential, but we were sheltered from the winds which were coming from the south east. We also kept power all day with just one flicker so fair play to Aydem.

More news about the October 2011 storms can be found here – http://www.hurriyetdailynews.com

I dreamt it was raining this morning. In my sleep I thought I heard the rhythmic drip of rain and when I rolled over in bed by the wane dawn light I thought I saw a steady stream of water from the curve of the roof tiles. I hurriedly wrapped a pareo around myself and went to the window, expecting to see the surface of the pool pitted with craters from the first rain since early May. But it wasn’t raining. Yet.

My weather witch of the west senses feel a storm coming; a breath of moisture on the night air last night, a wisp of high mares tail cloud in the west at dawn, a tendril of a cold front reaching out and across Turkey.

The morning light is grey tinged, the sun flaring white in a pale flat sky and the birds are quiet in the pine trees.

Nick met him at the tea shop yesterday afternoon. “Come. Have tea!” he yelled gaily to Nick, beckoning him over enthusiastically. “We have rain coming” he said, “Much, much rain. I have sent my sister to make the farm safe!”

I imagined his tiny, dark, twinkling toed sister dancing around his farmyard industriously tying down loose tarpaulins, squirreling equipment away in the poly tunnels and wrestling machinery under cover whilst Ahmet took tea in the afternoon.

The old man who claims he used to own Vinnie, though why anyone would admit to owning the foul smelling bug eyed creature is beyond me, met Nick this morning and he too warned that rain was coming.

Nick met him at his fig field, where he paused from laboriously gathering fallen figs with hands whose knuckles were swollen big as walnuts, “çok yağmur geliyor”, much rain coming, he warned Nick as he creaked over to pat Vinnie, who must like him because he did the slow plumy wave of the tail thing as opposed to the vicious gnawing of the hand thing.

Now is a bad time for rain. The worst time of the year, because torrential rain on rock hard ground means flash floods and sudden water on bone dry roofs that have twisted and cramped in the 45 degree days of summer will mean leaks and puddles in the night for the unsuspecting, particularly those who have allowed heavy footed types onto their roofs during summer for repairs to solar systems and satellite dishes.

We should be okay, we normally are, this house is built differently, but those in more jerry built structures can expect streams appearing under sun shrunken doors and the drip drip drip of the water torture in the night as the rivulets worm their way through cracked tiles and between now less than close boarded roofs.

Tonight, if it rains, the power will go off and we will be treated to a splendid light show of bolt throwing storms striding around the mountains. And in the morning the roofs of the village will be clean washed orange and the courtyards will be dark and muddy with the dust of a 150 days of summer sluiced away in one great deluge.

Nick will be delighted; he can get the jet washer out again! 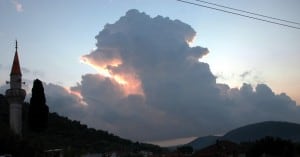