It was sunny (bloody hell!) and the temperature was due to reach 20 degrees (about time!) and we’d been working hard all week (honestly!) so we decided to take a drive up the Cesme peninsula, continuing our endless quest to find a bit of Turkey not totally covered in litter.

Aside – The litter problem is getting worse; maybe this long cold winter has made it more apparent because under grey skies you notice it more but despite recent attempts at promoting recycling the litter and rubbish seems to pile higher and higher. In Illica’s beautiful crystal waters plastic bags billowed like jellyfish and on the narrow, twisting road to Karaburun, that runs alongside the rocky shore, at one of the infrequent passing places overlooking a pretty turquoise bay two old sofas had been abandoned, one jauntily mounting the other against a backdrop of rich blue sea. It’s heartbreaking and annoying and it’s not just plastic bags and bottles, it’s builder’s rubble, rusting rebar and often old furniture. Everyone seems oblivious to it, with happy families enjoying their Sunday cook out next to piles of decaying rubbish, their eyes firmly fixed on the one bit of the view that looks good.

We decided to go first to Alacati, the stone village next to Cesme, I’ve never been into the village, just bypassed it on my way to the port. I had heard it had a thriving antiques market on a Saturday and Sunday, around the central mosque, but it was too early in the year for the traders to be out and the stalls were all shut up. The antique shops in the myriad of side streets were open for business though and so were the many boutiques and quirky little restaurants but the prices were so insane and the antiques so mediocre there was no place to start bargaining from.

Turkey’s a bit weird about antiques, the place should be littered with them but it isn’t and when you do find something the starting price makes you go green. There are very few bargains to be had here. I was in Capadoccia a few years ago with a good friend who is very clued up on antiques, whilst browsing in what we would class as a junk shop at home we spotted an old chandelier, nothing too fancy, nothing too big, nice size for a bedroom and we asked the price. The owner said his best price was 34,000 Euros! Even if Tarkan had swung from it you’ve just got nowhere to go with a starting price like that, you just leave. And it was the same in Alacati on Sunday, crazy prices, and it just puts you off asking about anything. The only good news on the antique front, we found a very useful reclamation yard where the owner was chatty and interested and the prices for stone troughs, old pots and the odd architectural antique were fair. It has been saved for future reference.

Alacati is clearly considered cool. I’ve not seen so many ponytails on men since 1989. Everyone is flashing an iPhone and there were two Porsches in the car park at the top of the village. Every other house was a boutique hotel. Breakfast in one of the trendy eateries that line the streets was 60tl for two, it was good, but it wasn’t that good.

All in all I’m a bit torn by Alacati, it’s pretty, it has some amazing buildings, both renovated and crumbling dangerously, it has more charm and quirkiness than many places on the Aegean coast but you will pay for that. Also the village is growing, with sitelar spreading towards the Cesme Izmir motorway and whilst done in traditional stone they are laid out in the usual tight regimented grid fashion of modern Turkish complexes and it looks wrong compared to the twisting narrow streets of the old town. I didn’t get to visit the new Port Alacati area which is a boutique development of individual townhouses lining pretty canals down on the seafront but the designs look amazing. We’ll go back later in the year and check it out, and by then maybe the Sunday antique market will be open and we may find something of interest at a reasonable price. Not holding my breath though.

A quick drive across the end of the peninsula took us to Illica and it’s pretty marina. Again this is the playground of the well heeled from Izmir and it’s water side cafes and views of the marina and the distant backdrop of the dramatic layers of the mountains of the Karaburun peninsula make it appealing. We didn’t stay long, we wanted to get on to take a quick look at Karaburun and between them Illica and Alacati are a bit too bustling and obviously trendy for my liking.

A few junctions back along the Izmir Cesme motorway and you come to the turning to Urla and the road to Karaburun. About a mile off the motorway the decent road runs out and you are back on Turkey’s usual potholed, narrow and twisting roads so you have to slow down, a lot, but it’s still a lovely drive, skirting the edge of the sea, passing through small villages and not too blighted by complexes (yet!). I particularly liked Balikliova, a small village of sea side fish restaurants where they were selling bunches of just picked freesias and hyacinths in the streets and the traffic ground to a halt as all the Sunday drivers from Izmir double parked anywhere to pick up fresh fish for the evening meal.

It really was a very pretty little place and if I wasn’t with someone who is likely to die if a single molecule of fish passes his lips I would definitely wish I had stopped here for lunch. The smell of grilling fish over wood fires was very tempting.

We drove as far as Mordogan before the time caught up with us and we had to turn round and head back – it’s about 1.5 to 2 hrs back to Kirazli depending on the traffic around Izmir – but we decided we wanted to see more of the peninsula, and make it to the end, past Karaburun itself, where the scenery is much more rugged and the high mountains give it the kind of drama I like in a landscape.

The port at Illica near Cesme

Illica harbour with Karaburun in the background 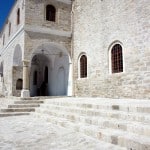 The central mosque in Alacati 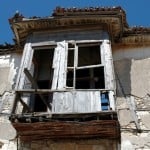 Old balcony on one of the Alacati stone houses 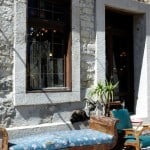 One of the many antique shops in Alacati 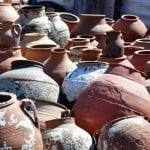 Old pots at a reclamation yeard near Cesme 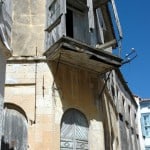 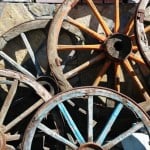 Wagon wheels at a reclamation yard near Cesme 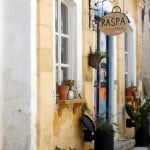 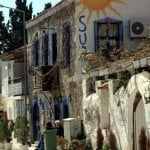 Alacati street near the mosque