Sometimes in Turkey it isn’t how well you do something that matters, it’s the fact that you do it at all.  Showing willing means a lot here; which explains why several of my neighbours were out in the dark slapping paint on their walls the night before the Cherry Festival!   The paved roads and wallflowers were liberally splashed with paint from flying brushes but the new paint was evident for all to see and to admire the industry of the residents.

Despite being a week or so early this year the Cherry Festival again took place in temperatures over 35 degrees under a sky bleached white by the heat.  The village was packed; important visiting dignitaries with their brightly shining shoes twinkling in the sunlight, slicked back hair and light weight suits were ushered obsequiously through the crowd by our all but bowing headman and the Jandarma marshalled cars and stood around trying to look tough whilst being 19 years old, downy chinned and sharing a high-visibility vest between three.

A traditional band spent several hours warming up on the stage in front of the school whilst the visiting hordes waited patiently, gossiped, munched cherries, wolfed down hot doughnuts, marshalled children on a sugar high and manoeuvred their plastic chairs for maximum shade from the cypress trees that surround the school. 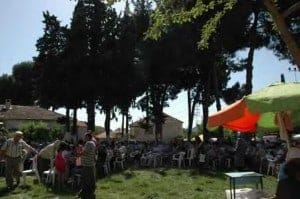 In the shady little courtyard next to the market ground the vendors of organic tomato sauce, pickles, cherries and jams were doing a roaring trade and matrons  sipping tea under the trees watched eagle eyed as courting couples discretely held hands as they strolled through the crowds.

The official opening ceremony, were speeches and back slapping precede dancing and jollity, was only 30 minutes late, which makes my village a model of speed and efficiency, but by then I was back behind my stone walls lying in the pool because it was so hot my new and on trend gladiator sandals were sticking to the melting tarmac and my camera was getting heavy.

As I sat on the pool that evening dangling my feet in the cool water and listening to the music wafting up from the school on the hot night air there was a fizzle and a crack and all the lights went out.  The band, ever enthusiastic, had overloaded the system with amps and speakers and tripped out the whole village.  They did exactly the same last year so that must now be the traditional way to end the Cherry Festival in Kirazli and the cue for happy and tired villagers and children sticky with doughnut syrup and cotton candy to make their way home to their newly painted houses through the now quiet streets.

On a side note, this week Shadow managed to achieve a personal best and scoffed her breakfast of biscuits, gravy and chicken livers in under 45 seconds.  Well done Shadow! 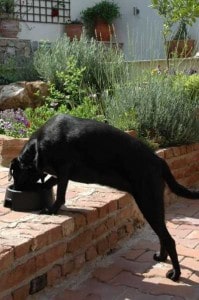