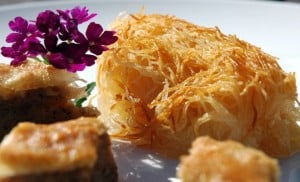 Home made Kunefe and Baklava for Seker Bayram

Yesterday morning an invisible crescent moon rose somewhere in the east, hidden in the bright light of a rising August sun and Turkey shrugged its shoulders and decided enough was enough and Ramazan was done, let the celebrations begin.

In theory the crescent moon should be physically sighted before Ramazan is officially over but that was just a technicality for the beaming children that called at the gate for sweets and treats from 8.30am onwards.

The bossiest girl in the village marshalled the children into relays to visit the scary foreigner’s house and I’m pretty sure she took a commission in Haribo jellies from all the children she brought. She’ll go far that one!

Seker Bayram is here and despite being on a massive sugar high the children are polite and respectful and so proud of their immaculate new clothes. Three little girls called at lunchtime, twins in identical tiered flounces of navy blue and an older sister in a crisp red and white checked dress, all with polished pageboy haircuts held back with bright slides and little handbags for the sweets. I told them how beautiful they looked and they giggled and blushed and scampered off up the lane to the next house on the route to terminal tooth decay.

Everyone is swopping sweet treats and Shadow is barking herself hoarse as she bellows her impossibly deep bark at every knock on the gate. Smiling neighbours bring plates of kunefe and cakes soaked in syrup and bakalava, calling Iyi Bayramlar and kissing us, and I return the plates with salted peanut caramel on them so we’re all square in the social scales that keep life here balanced.

Neighbour’s daughter was so proud of the kunefe she brought us. As her mother giggled manically, so excited by Bayram, daughter delivered us a plate of the golden pastry strands curled in skeins and bathed in syrup. I know it takes decades to learn how to make properly and wrists of steel to hand roll the pastry so thin, chop it so fine and then cook it over an open fire by dropping it onto a slowly rotating copper dish. Daughter was justifiably proud of it and Nick wolfed it down.

For all that Bayram is a time of celebration, a release from the humility and endurance of Ramazan it is also a time of remembrance, when neighbours and friends are visited and connections renewed.

Each year at Bayram I am visited by the couple who rushed Phil to hospital the day he died. They used to live a couple of doors away from me but have now moved to a smart new building near the tea shop. They came at sunset when we were feeding the dogs, the husband with his gentle smile and his wife with her proud upright bearing and soulful, knowing eyes; they are the sweetest, kindest people and they make a point to come and see me and we have a brief conversation about how we are and what we are doing.

She chides me for staying inside too much, hidden behind my walls doing weird things with computers and then she kisses me on both cheeks and gently strokes my face with her permanently hennaed hands and in the look we exchange is the memory of that day and her ongoing sympathy washes over me. You are never alone in Turkey, people remember.

With all the celebrations and the old memories stirring and floating upwards like bubbles in thick soup I find myself thinking of home and I go online and search for images of Pembrokeshire, to remind myself of the green grasslands and high grey cliffs of where I came from. And in some uncharted backwater of cyber space, on an old fashioned site with archaic code, I find electronic footprints to my old life; I find wedding photos of an old friend getting married in the church of the village where I owned my first home. The village that I come from, the village where my daughter was born and where she played in the gardens and fields and chased badgers and fell off her bike and where she and her best friend Celyn frightened themselves to nightly nightmares by telling ghost stories amongst the sagging tombstones in the graveyard of that very church.

I see people I haven’t seen for fifteen years, old friends and families, and they look the same as they ever did. I see a village I left long ago and it is as compact and familiar and tight nit as Kirazli. I see a church door in shadow and sunlight and laughing guests and I guess for all the thousands of miles between here and there I haven’t really come that far. Once a village girl, always a village girl, from St Nicholas in Pembrokeshire to Kirazli in Aydin, village to village, forever coming home.

We should be so different, Kirazli and St Nicholas, but we’re not, and that is a comforting thought.

Iyi Bayramlar from Kirazli to all the villages of the world.