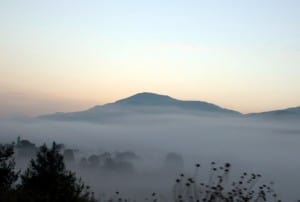 You can leave the butter out of the fridge for longer than nanoseconds without it turning into ghee.

The village children are being shoe horned into their winter vests and cheerfully wear home knitted tank tops that you would have been burnt at the stake rather than wear in 1976.

The dogs have moved from their summer positions under the ceiling fans to their autumn positions curled deep in indentations in their bean bags. They will spend winter hogging the fire.

The goats are growing their winter coats and are getting shaggy and curly bearded.

Nick gets his jeans out because his knees are cold and looks ten years younger because he has an inside leg measurement of 36 – British men rarely look good in shorts!

The pool temperature drops eight degrees in a week but is still two degrees warmer than the sea is around the UK at its warmest.

You run out of storage space for towels because you are no longer using six a day. A girl should always know where her towel is, currently mine are everywhere.

You close the French doors for the first time since April.

The cyclamen that snoozed all dried up and tiny all summer starts to grow at a frantic pace.

The geraniums give one last flourish of pink.

When you wake up in the morning the valley is brim full of mist with just the slim spires of the cypresses spiking through the fog.

Your thoughts turn from crunchy salads with tangy dressings to pies and broths and what you can do with twenty kilos of pumpkin.

Any second now someone is going to give you a string of quince and you’re going to have to be grateful.

The biting flies, determined for one last mouthful of flesh before the cold kills them, dive bomb you in ravenous squadrons. If you’re going to get bitten or stung now is the time.

The days appear to zoom by as the gaps between the calls to prayer get shorter as the nights draw in.

There is the usual debate about if and when the clocks will go back, Turkey is confused on this issue and debates and decides and then changes its mind annually. It really wants to be GMT +2.5 but that makes things tricky.

Just before dawn, in the darkest part of night, when the stars are so bright they burn your eyes, the turning year sends crystal clear Orion striding across the view from my bedroom window. I have a very soft spot for Orion; it’s nice to see him again.