I thought I must have been looking particularly scruffy and needy lately when one of the neighbours brought me a gift of goat meat at Kurban Bayram. Then I remembered her son had recently got married and the gift of money and coffee cups I gave must have tipped the delicate social balance in my favour, so when they killed a goat at Bayram I received a choice cut to balance the social order.

Goat meat, especially Turkish goat meat, is as succulent as lamb. The goats are young, not old and stringy, and with a diet of fragrant leaves and herbs their flesh is delicate and the taste not particularly different to lamb. So if you haven’t got goat for this recipe then lamb works just as well.

There is a long history of cooking meat with fruit, from medieval English recipes, to Jamaican cuisine to mainstream Moroccan cookery which this recipe is based on. My late husband would have hated this recipe, he loathed fruit with meat, wouldn’t even put apple sauce on his pork, to him it was just wrong! And the meat and fruit combo does bring out strong opinions in people, but I love it, I think it works well and it gives depth of flavour and a contrast that I really like.

First you need to marinade your meat. I’m using just over ½ a kilo of goat cut into chunks.

Rub into the meat and then put in the fridge for a few hours or overnight.

Traditional tagines will have salted or preserved lemons in, and this would add a subtle flavour to the dish that you just can’t replicate with fresh lemons. I haven’t got any preserved lemons but if you can get your hands on them and add one just before the long slow cooking then you will get a really authentic Moroccan flavour.

I cook this recipe in the type of large domed terracotta pot that is popular in Turkey. They perform the same function as the traditional funnel shaped Moroccan tagine in that they form an oven within an oven and allow everything to cook slowly without drying out. A large casserole does the job just as well.

The great thing about tagines is you can use whatever fruit and vegetables you have to hand with the meat and the spices. So you don’t need to follow the recipe exactly, instead use what you fancy, so long as you add onions and garlic the other flavours are pretty much up to you.

In this recipe I’m using potatoes, aubergine, Sharon fruit and fig purely because they are in season. You could just as easily use dried apricots and dried figs, fresh olives or lots more tomatoes. The choice is yours.

Brown the marinated meat in a large saucepan in a couple of tablespoons of olive oil, once browned remove the meat and gentle fry the onions and garlic making sure they don’t burn. Deglaze the pan by sloshing in some of the wine and then add the potatoes, chopped tomatoes, aubergine, and the chopped Sharon fruit and fig. Stir all together then add the browned meat. Add the remaining wine and the stock and bring to the boil. Season with salt and pepper and then pour into a large casserole/tagine and put in a medium oven for ages. Well, the longer and slower you cook this the better it tastes. I have mine in the oven for three hours on 150 degrees. I’ll take the lid off half an hour before serving to allow the sauce to thicken.

This is so easy it’s not fair! Mix six or seven tablespoons of olive oil and the juice of two lemons with half a kilo of couscous. Pour on a litre of chicken stock and leave for 15 minutes. After 15 minutes stir with a fork, scatter with pomegranate seeds and serve (or if you are a Nigella wannabe, flirtatiously frisk your couscous, adorn with luscious jewels of pomegranate scattered like a pirate’s horde across the swollen grains and serve with a smirk that promises lots and delivers nothing).

Tip – How to deseed a pomegranate – roll it heavily on the worktop, pressing down until you hear sickening crunching noises inside! Then cut the pomegranate in half, hold it over a bowl and whack it with wooden spoon. The seeds will fall out and the membrane will stay inside. Alternatively, cut in half and working underwater in a large bowl separate the seeds from the flesh with your fingers, the seeds will sink and the membrane will float to the surface and be easy to scoop off.

I had to produce a quick pudding to go with the tagine and with not much time came up with baked Sharon Fruit.

Sharon fruit don’t get any better with cooking but if you need to look like you made an effort baking them produces lovely sweet smells and happy guests. Allow one large fruit per person, place in an oven proof dish, quickly drizzle with wine (rose in this case) pile a dessert spoon of sesame seeds mixed with honey on the top and a grating of fresh nutmeg. Bake in the oven for 30 minutes and serve with cream cheese mixed with icing sugar or crème fraiche. 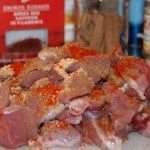 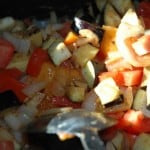 Fry onions, garlic, your fruit and vegetables in a little olive oil 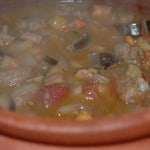 Add stock, bring to boil and transfer to tagine to cook for a few hours in the oven 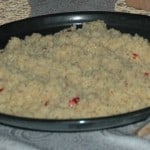 The finished couscous, enough to feed an army! 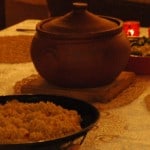 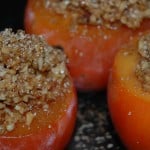