This is a boring entry about swimming pools, there are no soppy passages about olive groves and the light in the valley barely gets a mention, feel free to skip it for prettier stuff. Unless you are a bit interested in pools or are Ian from Koycegiz who likes this kind of thing.

I wouldn’t be without a pool in a country like this and five summers of 45 degrees have made having a pool a major convenience in my life. Like a car it is one of those things that a lot of people choose not to have here because they’re a bit frightening and they sound expensive but which I wouldn’t be without.

I designed this pool (okay I looked up on the internet how to do it and bullied some poor workmen into doing it as I said!) and I deliberately made a few choices about it that were uncommon here, the main one being I chose a skimmer system when every man and his dog has a perimeter overflow.

I chose a skimmer system because it’s easier to manage, perimeter overflows are very pretty but the canals tend to leak and as “level” is a very subjective term in Turkey and a perimeter overflow won’t work properly unless it is level I didn’t want to take any chances.

So we built the pool and it has a waterfall with a separate pump which is identical to the main pump and acts as a backup when the other is being serviced and off we went. And it is all very easy. The pool is vacuumed every few days or as required, the water is tested every now and then with a little home kit and it doesn’t take huge quantities of chemicals to maintain it because we don’t have children constantly weeing in it (now Nick is house trained) and we don’t have hordes of adults shedding skin and washing off suntan oil in it and so it is remarkably easy to live with.

Every year I buy floculator, a chemical that makes dirt particles clump together and sink to be easily vacuumed, I buy algaecide to stop an algae bloom, I buy what is called Mavi here which makes the water sparkle in the beautiful clear light here (see the light does get a mention!) and I buy chlorine tablets to drop in the skimmers and we go through about one a week in the summer and one a month in the winter. All in all it costs about 200tl a year to run and I keep it running all year round.

So all was sweetness and light and sparkling water until I made a slight cock up with the chemicals a fortnight ago. We have had an unusually warm and balmy autumn and early winter with temperatures well into the 20’s all through November and most of December and so there was a late algae bloom in the pool and it went green. In my usual casual way I chucked a load of algaecide in as night fell and turned on the waterfall, forgot about it for a few hours and ended up with this (see photo) 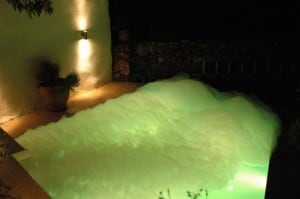 My pool was very unhappy after this and I couldn’t get it to clear so rather than turn it into a toxic soup a little light maintenance was in order. There comes a point where putting more chemicals in is just a waste of money so we took the more direct option. As it hadn’t been emptied for four years we drained it and took the opportunity to give is a good going over. Nick scrubbed the sides and we checked everything over and we’re starting again from scratch with a clean pool, minimum chemicals, the jets all scrubbed out, the underwater lights checked and the filters cleared of lime scale. 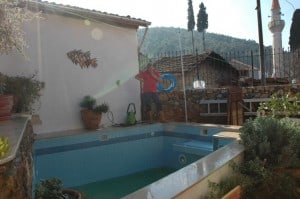 Will this go over my wellies? 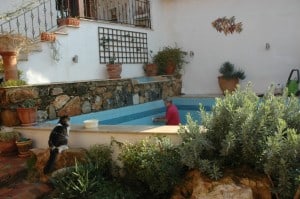 Evils supervising the cleaning of the jets

Each pump is serviced every other year by a man in Kusadasi who oils the bearings and services the motors but the huge sand filter we deal with ourselves. Last year we topped the sand level up ourselves but we wanted to be sure we had the right grade sand and how much should be in there.

Now people moan about the trouble they have getting things done in Turkey but in my experience Turkish service is second to none, particularly if you go to the top. We needed to check what type of sand to put into the filter and how often we should do it so we sent an email (in English) to GEMAS in Istanbul who supplied the equipment. The guy we bought the pump and filter system from had moved to Antalya so we went straight to the manufacturers. One hour after the email was sent a polite and informative representative of GEMAS phoned, in perfect English he talked Nick through the type of sand to put in the filter, the grade and amounts and how long it should last. Fantastic service, but we find that we get that more often than not here, even with items out of warranty or guarantee.

The pool took five hours to empty, washing clean all the streets down as far as the tea shop in the process, an hour with the jet wash to clean the grout and it will now take a day and a half to fill again. 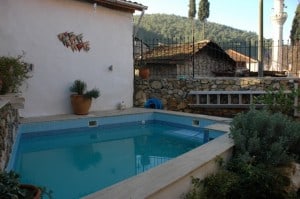 I suppose I could have left it empty until Spring but I don’t like leaving pools unfilled, it’s asking for trouble, and I like to keep them working at least minimally over the winter, it saves the pumps seizing up and it shows anybody viewing the house that the pool actually works. Never buy a property where you can’t see the pool working because until you do it’s just a really big hole in the ground with expensive but unproven kit attached! 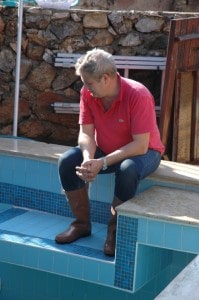 The Zen like art of watching a pool fill

So now we are watching the pool fill, which is a very Zen experience and way more calming than watching paint dry, and Evil’s is fascinated by it all as he is worryingly fearless of water. 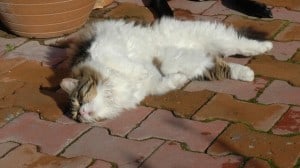 Evils resting up after a hard day of pool maintenance