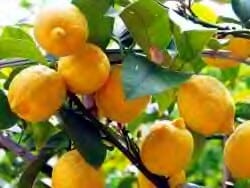 We are up to our eyeballs in lemons! It is that time of year when lemons are everywhere and you can’t give them away and funnily enough despite being a store cupboard staple in the form of juice there aren’t really many recipes that call for substantial quantities of lemons.

Once you’ve made lemon curd – which is mainly eggs – and sussex pond pudding (which I haven’t made yet but promise I will David!) which only uses two lemons at most, and chucked together a few salads and had a gin and tonic you still haven’t made much headway into a couple of kilos of lemons.

I’ll slice a few and freeze them for David’s G&T and I’m definitely going to do a jar of preserved lemons where they are pickled in salt and their own juices. Preserved lemons are great in Moroccan recipes and give a really individual flavour (there is a preserved lemon recipe at the bottom of this entry).

In the mean time, last night, I made a Spanish inspired braised chicken thigh, chickpea and soguk recipe that turned out really well. It reminded me of the Spain of my childhood and the sweetness, sourness and backgroud heat gives it overtones of paella. Nick thought it had a little too much lemon but it worked for me. The chicken skin comes out really crispy and is the best bit!

Packet of skin on chicken thighs (there were seven in my packet)
Onion, finely chopped
2 cloves of garlic, chopped
1 lemon – grate the zest thickly and then cut in half, use one half for juice and chop the other half into small chunks.
Tsp paprika
Tsp chilli flakes
Tsp tumeric
Tablespoon Honey
3 tomatoes chopped into chunks
Splash of red wine (or balsamic vinegar if you are the kind of person that doesn’t have spare wine)
Splash of chicken stock
Large tin of chickpeas, drained and rinsed
2 Sucuk sausages chopped into small pieces

Brown the skin of the chicken thighs by frying for two minutes in a frying pan with olive oil – I pat them dry first and rub in salt. Remove from the pan and in the juices that remain fry chopped onion and garlic until translucent. 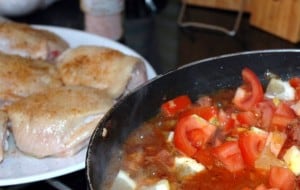 Brown the chicken then make the sauce

Add the chopped sucuk, if you can get chorizo it works the same way, if you haven’t got that then smoked bacon will work as well, and fry until crispy. I only use sucuk because it’s all we have here. Add the spices and fry gently for a few minutes so the spice oils are released then add the honey. 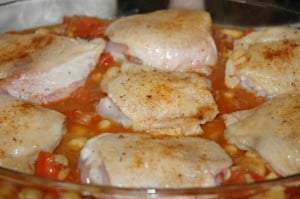 Press chicken into the liquid, cover and bake in the oven

Transfer to an oven proof dish and place the chicken thighs on top, pressing them down into the liquid. Cover and cook in a medium oven for 40 minutes then remove the cover and cook uncovered for a further 15 minutes so the skins crisp up. Just before serving scatter over some parsley.

Serve in a bowl with loads of bread. 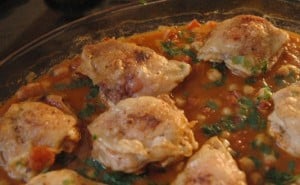 Serve in a bowl with plenty of bread

If you fancy pickling your own lemons this is the method I am using. 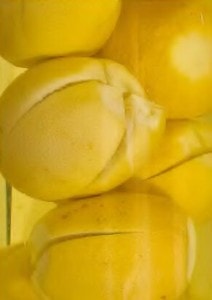 Lemons pickled in juice and salt

Trim the top and bottom of your lemon and then make four slices into each lemon, as if quartering it, but not cutting all the way through, so the lemon stays whole. Pack salt into the cuts and then put the lemon in the jar, repeat the process, squashing each lemon in as hard as you can! The aim is to have very squashed lemons! Add the juice of two more lemons and a further sprinkling of salt and then put the lid on and store in a cool dark place. Every few days for the first week or so open the jar and squash your lemons some more, maybe adding an extra lemon if you have room. The jars are supposed to fill up with the juice of the lemons until they are covered, at this point you can leave them alone.

They take around four weeks to pickle in the salt and their own juices and can then be transferred to the fridge where they will keep for a few months. They should be rinsed before use to get rid of the excess salt and they are fantastic in tagines but also sliced in salads and mixed with olives for meze.