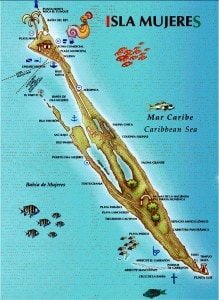 Isla Mujeres is a spit of coral and sand in the Caribbean Sea just off Cancun in Mexico. To me it is one of the most beautiful places on earth. Blessed with powder white sand beaches Isla is surrounded by the most amazing coloured water, water of the clearest, palest, purest blue you have ever seen. Everyone who goes there talks about the colour of the water.

You get there by ferry from Cancun and it is, or it was, a million miles away in attitude from the flash and high rise of that particular party town. That’s me, always stepping off the beaten track!

I built a house there once, in the jungle, at the south end of the island, not far from the Mayan ruins of the goddess Ixchel, in a patch of jungle that was garlanded by butterflies in the day and the will o the wisp trails of glow bugs at night.

The last time I saw Isla was a summer night in 2005 when the humidity hung heavy in the Caribbean air and lightening was flickering far out to sea on the Bay of Mujeres. My husband Phil and I had just had dinner at Gran Puerto Cancun with our friends Katherine and Bruce and we had watched the sunset paint the sky over Isla Mujeres from our seats at the Alta Vista restaurant at the top of the lighthouse at the port.

As we waved Katherine and Bruce off that evening I remember watching them walk down the dock to the ferry, with the lights of Isla in the distance and I wondered if I would ever be here again because we had just sold our house on Isla, we were heading to Turkey and I didn’t know when we would be back.

I haven’t seen Isla since that day.

Phil never saw Isla again; he died in Turkey in 2008. I never saw Katherine again; she passed away early this year after a long and courageous fight against bowel cancer. The Alta Vista restaurant is closed after one too many hurricanes hurled itself at the tower but Isla is forever there, tucked away in a corner of my mind, waiting.

I stopped reading my friend’s trip reports, I stopped keeping up to date on the island. I kept in touch with Katherine as she took on cancer but we didn’t talk about Isla. I never talked about Isla.

And then my Dad died and for no reason I understand I started thinking about Isla again. It started calling to me, across the seas, across the years, a call rolling up along the gulf stream from the Yucatan to the coast of Pembrokeshire. It said, “Come see me, it’s time.”

So I’m going back to the island, making the pilgrimage at last. I’m going to go play in the water, dive the underwater museum, see Silent Evolution, the ever growing crowd of statues that now colonises the sea floor off Isla, it wasn’t even an idea last time I was there, now it’s nearly six years old and becoming part of the ecosystem. I’m going to go watch them release the baby turtles into the autumn seas, go eat great food, maybe drink a few cocktails, go discover the island vibe again.

I’ve got a flight to Cancun and a ticket to the island and I’ve booked a few days at Na Balam which is a tiny little hotel on the beach that I have always wanted to stay at and then I’ll see where we go next. Maybe I’ll stay on the island, maybe I’ll move on, I’m traveling with hope but if Isla has changed beyond all recognition then that is cool too, at least I’ll see her one more time.

Before I head off to Isla I have a trip to London planned. I am lucky enough to be attending BlogFest 2014 where I get to meet other people who share my weird blogging habit.

Bloody hell, people like me, people who readily admit that they blog and don’t seem to be ashamed of it!

I’m looking forward to it, it’s a chance to socialise, a chance to listen to some great speakers including one of my favourite authors, Nick Hornby, and a chance to participate in debates and masterclasses. It’s exciting to be going; blogging is often lonley and whilst you get boosted by the lovely comments people make you don’t get to interact with people in person very often, or I don’t because I tend to live in weird places, so actually getting to spend time with other bloggers is going to be very, very interesting and cool and stops me feeling quite so odd!