Selcuk market on Saturday was heaving in the bright winter sunlight and it was mid afternoon by the time we got there so between wriggling through the crowds, dodging the camels and bumping into at least three other photographers I didn’t get as many pictures as I would have liked.

The camel wrestling was on this weekend and so various gaily caparisoned camels were being paraded on the outskirts of the market and the horn players and drummers who announce the championships were in town, weaving through the crowds, adding to the atmosphere, and making it all a bit more frantic, exotic and noisy than usual.

By the way, when I first came here I thought camel wrestling was man versus camel – on reflection that would probably be more fun to watch than the real thing which mainly involves a little light camel style flirting, a bit of shoving and a lot of flying camel dribble!

Here’s a quick recap of what’s available right now on the markets and a few prices.

Pomegranates – still great value and brilliant in everything from salads to pudding.

Wild oyster mushrooms – 5tl a kilo they add an exotic addition to casseroles or fried with garlic and butter and a dollop of cream added at the end they make a fast mushroom sauce.

Leeks – amazing value at the moment, use them in everything from soups to gratins, .75tl a kilo.

Strawberries – the first strawberries from the greenhouses in Antalya, 6tl a kilo at the moment but I’m not going for them yet, instead I prefer the winter sweet apples, their flavour intensified from storing and at 1tl a kilo they are fantastic in pies.

Cauliflowers – 1tl for small ones which are still a midweek meal in themselves served with a cheese sauce and scattered with bread crumbs and chopped sucuk, the spicy paprika packed Turkish sausage

Dried fruits – dried figs, apricots and cranberries are good value and versatile. I am still up to my eyeballs in cranberries but I topped up the store cupboard with the apricots and figs and also chunky cashews for Chinese recipes and salads and whole almonds to be ground for baking. I spent just under 20tl on dried apricots, figs, almonds and cashews and those will last me for the rest of the winter.

Meat – whole chickens are good value and so are the chicken breasts. They are jointed on the spot by the mad machete wielding butcher. |Four large chicken breasts cost 6tl and the remains of the carcasses are sold as chicken sirt which we use in the dog food and which costs 2tl a kilo. The price on the board is not necessarily the price you pay if you use a butcher regularly and all in all our meat bill this week was 18tl and that was for 600grams of minced beef, one large whole chicken, 4 huge chicken breasts and 4 kilo of chicken sirt. Turkish chicken tastes like chicken used to when I was a child, they have such a rich flavour and need only a quick drizzle of olive oil, a grind of salt, a lemon inside and a slow roasting to be amazing.

Cheese – the Izmir Tulum which is our equivalent of mature cheddar was a little salty this week, I bought half a kilo for cooking and freezing and opted for a soft goat cheese which is rich and ideal in sandwiches or on crackers, to eat on its own. I bought mild white village cheese for breakfasts and pizza topping and couldn’t resist a drier, denser white cheese which I know lasts longer and will keep for a fortnight in the fridge. My cheese bill was heavy this week at 17.5tl but I froze all of the Tulum and in total I had over two kilos of various cheeses.

Including 20tl spent with the plant man on cyclamen and pansies the shopping this week came to 100tl with a further 40tl spent in Bim on butter and the vast amounts of milk and coffee we go through. This was a larger shop than normal as I hadn’t been to the market for a fortnight. 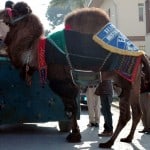 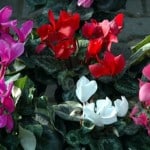 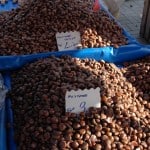 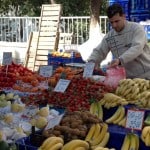 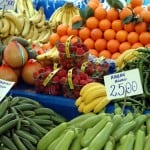 The first strawberries from Antalya 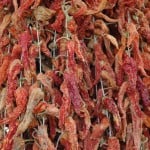 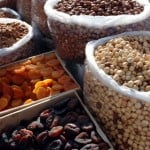 Dried Aubergine for patlican dolma – thanks Stephen for identifying these!