It’s Saturday afternoon, time to do the weekly shop, not really a major chore in Turkey in spring time. Normally Nick goes to the market because he likes shopping and I like time to myself but with the sun shining after a few days of rain it was good to get out.

At this time of year before early morning shopping becomes a necessity because of the heat we can take our time and so we stopped to admire the aquaduct on the road to Selcuk and took a quick detour down to Pamucak beach to see how it had faired in the recent storms before turning back to Selcuk to do the shopping. I think it would probably be hard to find a prettier way to the shops! 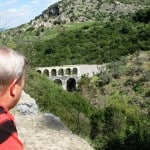 Aquaduct near Ephesus from the Selcuk Aydin road 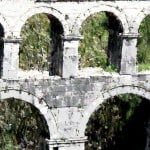 Aquaduct on the road to Selcuk 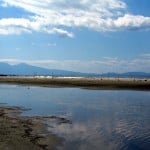 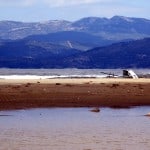 Waves at Pamucak after the spring storms 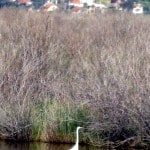 Wading birds in the wetlands behind Pamucak 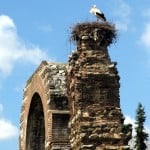 Storks arrived at Selcuk to nest 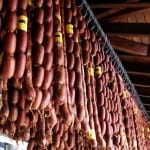 Strings of fresh sucuk outside our butcher at Selcuk market 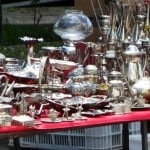 We shop at the street markets; they are a hundred times better than the supermarkets which still haven’t managed to change the shopping habits of eons here in Turkey. Street markets aren’t as confusing as they initially seem, as I told a Facebook friend when I first posted these photos online shopping at the market is the same as wending you way around Tesco, you have your familiar route, the stall holders have their usual pitches and it is just like a big sunny supermarket but with no tedious queue at the end, you still get the demon grannies with their trollies with the razor sharp wheels though!

I now find normal supermarkets weird, with their flat bright lighting and lack of human interaction they feel surreal and strange, you can’t see the sky, nobody tells you what’s good this week, nobody reminds you if you have forgotten one of your regular items and you can’t tell what time of day it is so you feel you are lost in some nightmare warehouse of high piled goods. And there is a distinct lack of storks 🙂