I may have mentioned this is the worst winter I have ever known here, but one pleasant side effect of that is the scenery is even more spectacular and dramatic than usual.

There is something so enticing about back roads, about the thin ribbons that wind up through the hills and the forgotten villages you see perched on distant crags, hanging in space above ancient olive groves.

Nick finds roads like this irresistible, he can’t drive a main road with out wanting to zip off down some suddenly spotted overgrown track just to see what’s down there. Sometimes there is trouble as a result, sometimes there are screaming rows as my poor little Hyundai gets asked to cope with terrain Hummers would blanche at and sometimes I have to turn around and thank him because he has taken me somewhere amazing.

He just can’t resist the next bend, the next hill top, the next potential heaven of a valley view. Always looking for Shambhala, that’s Nick. 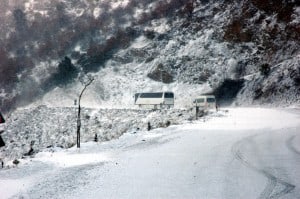 Blowing snow and mad bus drivers on the road to Bozdag

The road to Bozdag ski resort defeated us though. What were whirling flurries of snow in Ödemiş became driving pellets of ice as we drove up the unfenced winding mountain road trying to get to the lake at Gölcük. When we rounded a bend and the full force of the northerly gale sent the snow into whirling white out cones and the lying snow was over the tyre rims I put my foot down and insisted he turn back. Sulkily he did, and as soon as we turned around three buses and a dolmus passed us, heading up into the icy heights. “If they make that bend we’re following!” said Nick. They didn’t make it. We went back down the mountain. We’ll try that road again in the spring, with sherpas. 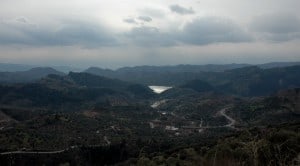 Looking down from the mountains behind Aydin over the lake

Twarted by Bozdag we took to the mountains behind Aydin, a short 30km drive from Kirazli. The mountains are a series of gradually rising peaks that form a barrier between the provinces of Aydin and Izmir. They are beautiful, full of hidden villages, eroded red rock and the sort of twisted multicoloured layers of strata you get with thermally active areas.

Village in the hills behind Aydin 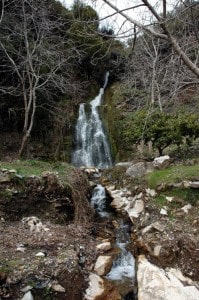 Waterfall by the roadside off the Incirlova to Tire road 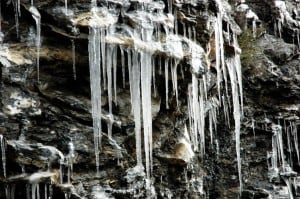 Icicles in deep shade on the road to Tire

This winter has taken it’s toll on the new road that heads from Incirlova over the mountains towards Tire. There are mud and rock slippages and the belidiye are out in force constantly repairing and making safe the route that forms a lifeline to the isolated villages. Just off the main road are narrow valleys with their sides patched with hard to reach olive groves being methodically harvested by the villagers.

Sacks of olives are stacked on the side of the road as it winds up past waterfalls, crosses rushing rivulets of winter run off and bypasses crumbling old bridges.

Well maintained and picturesque villages either nestle in small fertile valleys or are perched bravely on rocky outcrops and in the deep shade of the valley side the rock walls are encased in icicles. 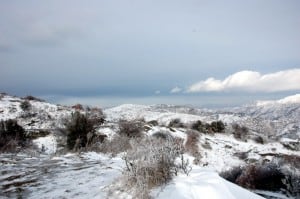 After 20km the brave new road from Incirlova gives up and reverts without warning to an unfenced single gravel track worming up higher and higher into the mountains. There are no more villages on this side of the mountain, just isolated farmhouses perched on spurs above their patches of field, backdropped against the high snow fields of the surrounding mountains, winter deserted and shut up they will be opened in the spring by their owners who have retreated down the mountain to winter in the lower villages.

As we crossed the top of the ridge of mountains we ran into the results of last Monday’s unseasonal snowfall. Stretching away into the distance, glowered on by low dark cloud the hillsides were cloaked in ice and drifted snow.

The road was clear and dry though and as we started down the northern side of the mountains we regularly met council workers industriously throwing sand on the worst icy patches.

Shadow playing in the deepest snow she ever saw!

We let Shadow out to play in the snow by the side of the road. She’d never seen snow like it and dived through it until suddenly she hit a drift and sank up to her nose. She didn’t like that and hurried back to the car! Which was fine by us as it was seriously cold, the north wind still blowing, tasting iron hard like more snow coming and stinging us through our jackets. 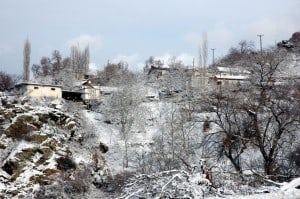 On the Izmir side of the mountains, village in snow just above Tire

It took as nearly an hour to drive the last 15 kilometres down to Tire and the snow extended all the way down to the town in the valley bottom. 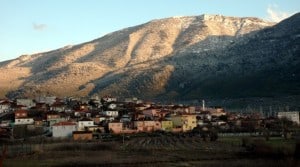 Back in Kirazli Gul Dag was still dusted with snow in the bright afternoon light, the northerly wind halting any thaw. 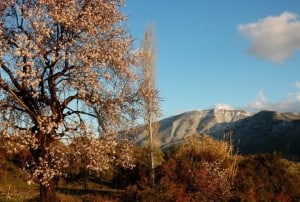 Cherry blossom in Kirazli, a snowy Gul Dag in the background

Still the cherry blossom, which judges seasons by the hours of light as much as it measures the warmth on its roots, is bursting out all over the valley, a brave bright pink flourish against the last stab of winter.