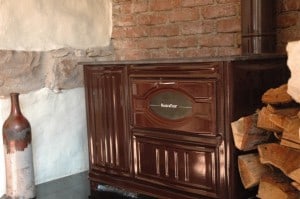 Whilst my friends in Minnesota send me photographs of three foot of snow on their deck furniture and their dogs wading through sculpted snow drifts here in Kirazli we moan like hell if it gets below 10 degrees and the occasional morning frosts are things of wonder. Turkish houses are not known for their ability to stay warm and most have all the insulative qualities of a paper bag, with holes in. I am better off than most because I know that thick stone walls alone won’t keep you warm; you need big windows to let the sun in and double glazing to keep the heat in. But we still need some form of heating for our brief winter and here the ubiquitous Soba does the job.

Soba’s (very bad Turkish!) run my village. They are used for heating, cooking, disposing of rubbish, drying clothes and making tea on. They are a central part of village life and the smoke from their narrow chimneys plumes in soft feathers or, on a cold morning, rushes in thick white waves across the rooftops as the village wives stoke the slumbering charcoal to roaring heat.

The soba is the Turkish wood burner and whilst there are many variations on the theme essentially it’s a metal bucket you fill with wood, set fire to and bung inside a tin box! It’s like a more efficient version of the oil can fire every picketing striker set up outside the factory gates in the 1970’s. 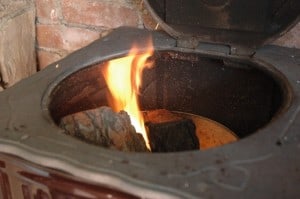 They feel very flimsy, your average five year old could lug one into the house, and they are cheap to buy and compared to the cast iron wood burners from home with their glass doors and potential lifespan of a couple of centuries they are pretty much disposable. I wasn’t massively impressed when I first saw a soba as my wood burner at home in the UK was manhandled into the house by three burly men sweating profusely. And then I got a soba because I didn’t have much choice and I lit it and it heated the whole house! And it stayed lit for days. And it heated up quickly and now I wouldn’t be without it.

Being a welsh country girl I can of course light a fire with nothing more than a damp twig and a few bits of orange peel but I don’t need to exercise my incendiary skills with the soba, they light really easily and they take ages to go out and in the morning a judicious juggling of damper and poker and very quickly it comes back to life. 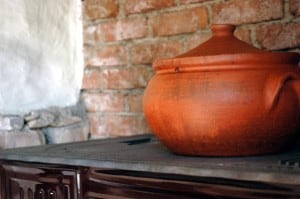 Mine has a built in oven as well as a cast top, sort of like a mini aga, and I can cook stews on the top and gratins and bakes in the small oven. The ever frugal Turkish housewife knows not to waste the heat and run up the electric bill by using a conventional cooker when you already have a handy way of cooking to hand and so all the cooking in the villages is done on the soba.

Most Turkish houses have the pipe from the soba running the length of the room before exiting into the outside through a hole knocked in a wall as the heat from the pipe is just as lavish as the heat from the stove itself. I am more conventional in that I have mine in a fireplace. My Turkish neighbours consider this a shocking waste of resources as a lot of the heat will be wasted in the chimney but at least the chimney runs through the upstairs guest bedroom and helps to heat that and two guest bathrooms and I don’t have the smoke or smuts problem you get from having it open in the middle of the room. 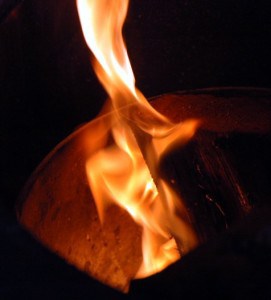 The Turks are an elemental people, they like fire and water, and whilst a Turk in summer will spend hours dreamily spraying water on his courtyard to lay the dust in winter he will light a fire at the drop of a hat. People light little fires by the side of the road whilst waiting for the dolmus. In the fields they burn the prunings from the olive trees and clippings from the vines. Fire makes them happy and nothing makes them happier than a roaring soba. Turkey in winter smells of wood smoke.

PS I should have written this a fortnight ago because it’s currently 22 degrees in the shade in my courtyard, around about 28 degrees in the sun, all the windows and doors are open, the birds that nest in the eaves are singing their little heads off and it feels silly to be talking about heating! But this is Turkey, tomorrow may be freezing and I’ll glad of my soba again.