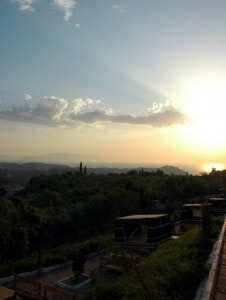 Restaurants come and go here with surprising regularity as volatile Turkish business partnerships explode, implode, merge and feud, chefs come and go, sky high rents drive businesses into the ground and menu’s get changed to meet the, often incorrectly, perceived desires of international guests. It makes eating out a bit of a struggle and we should try more new places but disappointing past experiences keep as returning to our tried and tested and predominantly Turkish favourites. With the exception of the ever reliable Salt Box by the Wednesday Market, which has been serving outstanding fish and chips for a very long time we tend to avoid the restaurants offering British and International dishes as I don’t like paying for something I can cook better myself and having Nick get annoyed when I insist on tipping the blameless waiter for a horrible meal is not conducive to a pleasant evening out.

So we stick to the Turkish restaurants patronised by locals and that works for us. The chefs don’t mess with the food and try to pretend it is something it isn’t and if it isn’t good they’ll get removed because nobody is more picky about the crispness of their pide crust, the spice blend of their kofte and the freshness of their salad than the average Turkish professional out for a meal. 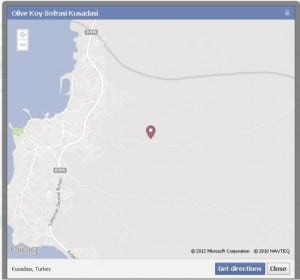 We had been driving past the new Olive Park Koy Sofrasi all winter on our way back and forth to Kusadasi and kept meaning to try it. It’s on what we call the old Aydin road which runs from Kusadasi, through Yenikoy and Camlik and onto Aydin. The Olive Koy Sofrasi is on the left about a mile beyond Kusadasi city limits. There is a large sign outside and you can see the tips of it’s tented restaurant rising above the olive trees and as an added marker there is normally a rather chubby black goat chomping through the daisies in the field beside the road.

It’s a nicely set up operation; there are picnic tables amongst the olives for those who bring their own food and there is a generously sized restaurant at the top of the site with gorgeous wide ranging views over Kusadasi bay, the Millipark and Samos. Just below the restaurant are individual (currently curtained) booths for those who want to eat a la turk and feel they are in a Yoruk tent (Yoruk seems very popular here currently, going through a bit of a renaissance) and there are plenty of animals for the children to look at and things for them to play on. It’s a real family place, designed to spend a lazy few hours amongst cooling breezes enjoying good food slowly. 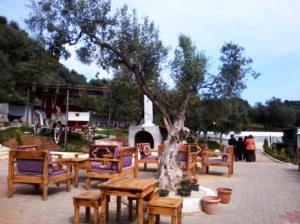 For all the pet animals and the view and the cute trappings it’s the food I am mainly interested in though and here it’s good. Unusually there is a menu and you can order Cop Sis or kofte or tavuk sis or a variety of mese, they also have my favourite Tandir Kebab but it’s only available on certain days. It is best to ask the waiter what they have available on the day as honestly, in traditional restaurants like this the menu is just a maybe possibly thing and the waiter knows best.

On our first visit here we had generous cop sis, a variety of salads and mese and were given a bowl of Keşkek to try – I love Keşkek, it’s one of my favourite things – and this Keşkek was particularly good with enough meat in the thick wheat porridge and with a lovely subtle smokiness from being slow cooked over wood.

On our second visit we had a few more mese including some incredibly tender artichoke hearts and some excellent lamb chops and very nicely flavoured kofte. Apart from the Keşkek which you don’t see that often it was the usual choices but prepared incredibly well which is what makes the difference. Prices were reasonable, more than we’d pay in a roadside lokanta but less than we’d pay in town, dinner for four came to just over 100tl and there was loads and a full breakfast is advertised as 15tl which is a fair price given the spread and the location.

On our first visit early one afternoon the restaurant was busy on our second visit early one evening it was very quiet so I imagine this is going to be a daytime favourite and I expect it is heaving on a Sunday. The views are fantastic but the food really gives it the edge as far as I’m concerned. Well worth visiting.

Keşkek is a traditional Aegean and Anatolian wedding dish; its so special Turkey applied for Unesco recognition of it under the heading of Intangible Cultural Heritage and back in 2011 this was granted.

We see it made a lot in the villages, where it is normally cooked outside the bride’s house in huge cauldrons stirred by burly men laughing their heads off at getting involved in cooking! Essentially it is a meat porridge of slow cooked wheat and lamb, the wheat having been cooked is pounded and stirred until it is thick and silky and the very tender slow cooked lamb is then stirred in. It’s normally served in bowls dressed with a drizzle of red pepper mixed with melted butter.

It’s not the most immediately appetizing looking dish and if you don’t know what it is you’ll ignore it on a mese selection but it has amazing flavour if cooked in the traditional way over a wood fire and well worth trying if you get the chance.