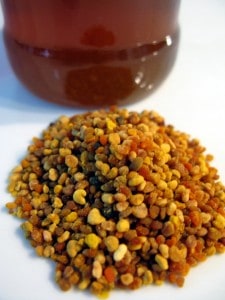 You know how it is, you’ve never heard of something and then you discover it and suddenly you see it everywhere and feel like a total tit for not having noticed it before. That happened to me with bee pollen.

Last autumn Nick came back from the village shop with a small container of what looked like popping candy, little grains of yellow, gold and ochre that smelled of dried grasses. A spirited display of mime by the shop keeper had made it clear this was something to do with honey and bees and was “cok sağlık için iyi” (very good for health) and having seen the bees staggering around the garden with their little legs weighed down by boulders of bright pollen we worked out this was bee pollen, harvested from the bees before they could take it into the hives (which seems a little mean considering we are taking the honey too!)

I was fascinated by the box of little gold nuggets so we did a little research into it and in the mean time fell over bee pollen supplements in every chemist we went to and every major supermarket in Izmir – typical!

It seems bee pollen one of those things that people either worship as a universal panacea or dismiss out of hand as quackery. Search the web and you’ll find thousands of interested parties who swear that ingesting bee pollen can cure everything from hair loss to in-growing toe nails but dig down to find scientific research and it’s thin on the ground although there are some interesting hints. 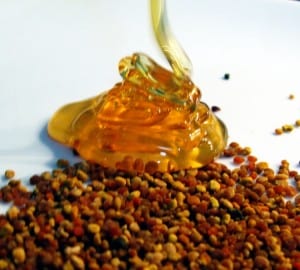 There are some scientific research articles quoted as evidence that bee pollen has effects on a variety of medical conditions, frequently mentioned is a study from 1948 by the Department of Agriculture in the USA who published the article “Delay in Appearance of Palpable Mammary Tumors in C3H Mice Following the Ingestion of Pollenized Food”. The article contained details of a study led by Dr. William Robinson of the US Bureau of Entomology where bee pollen appeared to delay the onset of tumours in mice genetically bred to definitely develop them.

Also frequently mentioned is a small sample study by Dr Peter Hernuss of the University of Vienna who gave bee pollen supplements to 25 women with inoperable uterine cancer and noted they suffered less during chemotherapy, fought infection better and developed a higher concentration of cancer fighting immune system cells. I can’t find that actual study though, only mentions of it. Which seems odd because honestly researchers should be all over this doing systematic research if the reports are true.
Whilst scientific data may be thin on the ground anecdotal evidence arrives by the skip load, everything from diabetes to arthritis to depression, all seem to provide people willing to stand up and be named and say “this made me better.” 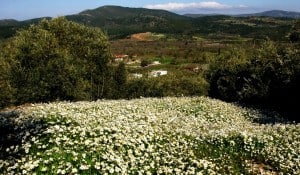 The first flowers of Spring flavour the pollen

I have no idea if bee pollen is the health super food some people claim but I do know it is a very complex substance and processing it can ruin it so if you do want to try it then getting it fresh direct from the people who manage the hives is probably the best idea.

The bee pollen we buy from the old man outside the village shop and from the rickety stands that pop up outside the market gardens in the valley is different from the commercially packaged and hermetically sealed bee pollen available in the shops. For one it is obviously really fresh and I think if there is a real health benefit to be found then it will be in the really fresh pollen, it is also a helluva lot cheaper and it hasn’t been processed in any way. Heat bee pollen and you lose the value, destroying some of the unique enzymes in it, leave it in a box and you lose more of the nutritional value, so buy it at source, use it soon and use it raw.

We sent some to a friend with early stage prostate cancer, it might not cure him but in the first days of diagnosis a proactive approach is important and the bee pollen made him feel he was doing something himself to fight his disease. He takes his bee pollen raw every day sprinkled on his morning yoghurt.

When I remember – and I’m hopeless at remembering to take any type of supplement – I take a teaspoon full, it tastes different every month, last autumn it tasted of dried grasses, of the sun blasted long days of summer and fields of gold, now it tastes of spring, of delicate flowers in bright green grass and the heady whiff of cherry blossom. Scientifically it may not be the answer but it does cheer your soul.

Warning – from what I can see, if you suffer from allergies to pollen or bees then taking bee pollen as a supplement would be a bad idea. On the basis that bee pollen is entirely dependent on the flowers the bees had access to and doesn’t come labelled it could trigger an anaphylactic reaction so I’d steer clear of scoffing of random bee pollen if you are prone to severe hayfever.