I’ve always liked Samos, it is green and pretty and has enough dramatic scenery to keep me entranced with sweeping views of pine clad mountains falling towards bright seas of banded blue. Being a quick ferry trip from Kusadasi it is also for us the most accessible of the Greek islands and over the last few years I have often popped over to enjoy a day trip and the island cuisine. So a few days holiday on Samos seemed like a good idea for a change of scene and spot of shopping even though it was August and high season and I expected the island to be busy. 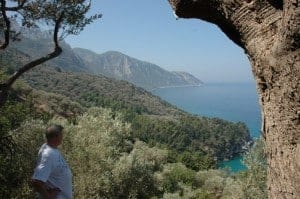 But Samos wasn’t busy. In fact Samos was empty. The beaches were deserted, the hotels all had rooms available and the colourful tavernas on the waters edge, with views of achingly picturesque fishing ports were empty. 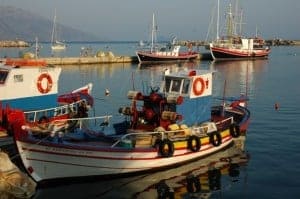 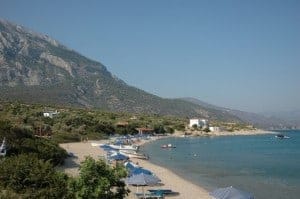 Lovely you might think, a Greek island in August pretty much all to yourself! And it would be lovely if anybody on Samos smiled, but they don’t, they are angry and they are bitter and right now Samos is looking for someone to blame for the lack of tourists and the fall in income and they aren’t looking at themselves!

In a small hotel on the south of the island the owner couldn’t be bothered to book me in, “Come back later” he grunted, and the following morning he glared at me when I showed him my email with the room rate he had promised. “You are very poor people, poor in the heart to make discount in August!” he sneered. I was confused by his syntax but not by the body language or the expression on his face.

Back in Samos town the only income appears to be coming from the daily trippers coming in from Kusadasi. A desperate hotel receptionist explained that the economic crisis means all the Greeks have stayed at home this year, too frightened to spend money on the traditional summer break and the cancellation of the interisland ferry services means island hoppers can’t get to Samos.

She offered me a choice of three different room types all at 20% below rack rate and the hotel was less than half full on what should have been the busiest week of the year. She didn’t expect the hotel to be open in September although they are normally open until the end of October.

Anecdote after anecdote showed Samos to be an island in the grip of a serious downturn. My favourite restaurant, a popular harbour front haunt – closed. Water with your meal – no longer free. Prices in the supermarket – 20 higher than three months ago. The village restaurant I normally go to in Vorliotis emptier than it was in February.

When I dropped my hire car off with my regular hire company, a company I have used on at least eight different occasions they tried to rip me off for half a tank of petrol, claiming the car had three quarters of a tank of fuel when I picked up instead of a ¼. When the glaring difference between the final mileage of the last customer on the sheet and my start mileage was pointed out the owner became aggressive and abusive before storming off.

All in all a sullen anger hangs over Samos. The place feels like somewhere the day after the mother of all parties has ended, everyone has a blinding hangover and no one is going to help with the clearing up.

On Samos they aren’t pleased to see the few tourists, they are angry that you didn’t bring twenty friends with you!

It is very different to Turkey. Turkey knows they are one bad season away from a long cold winter where you’re so broke you have to eat your shoes in February! When times are hard they try harder, work harder, smile more and go the extra mile. In Samos they seem to have forgotten how to make it through the bad times; they whisper that Rhodes is busy and are jealous, they say the Germans pay less for things than they do, they scowl at the few tourists like it is their fault.

As I left Turkey the other morning I forgot to pick up the ten Euros change from my port tax, the young man from Azus tours came running after me – “Madam, madam, you forgot your change” – I don’t think that would have happened in Samos, I think they would have pocketed it and felt they deserved it.

Sometimes beauty just isn’t enough, and the clear blue waters and soft sand of Samos don’t make up for a darkness of mood and the scowl of the waiter when you choose the 7 euro prawns rather than the 9 euro prawns. 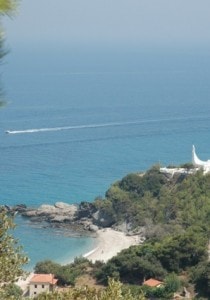