Shadow is a sweet natured and normally well behaved dog.  Apart from the usual Labrador trait of “if I can’t see you I can’t hear you” where she sometimes allows herself to ignore instructions by turning her head away.

She does however have a dislike of being left behind when we go out and her way of showing her displeasure is to destroy the flower border in the courtyard. 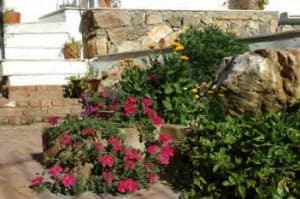 Turkish village houses tend not to have big gardens, over the centuries they developed as places of security that you returned to at night from long days out in the surrounding fields and orchards.  The courtyards are practical spaces for washing and cooking and socialising late into the night.  They are normally enclosed with high walls and whilst they will be full of containers of potted plants and covered with vines and climbing roses they tend not to have flower borders as these need tending and are too much trouble.

I have a flower border by the pool.  I never wanted lots of land – I’m practical, I don’t want to kill myself trying to tend big land in temperatures that every summer reach 45+ degrees!   But I love my courtyard garden and I love my flower border.

When Shadow first arrived here she seemed fine with being left alone occasionally.  It was only when she gained confidence and realised she wasn’t going to be beaten to within an inch of her life that she felt it was okay to voice her displeasure at being abandoned when we went to meetings.  Her way of showing displeasure involved digging up the flower border.

So all last summer involved replanting the flower border every week or so when Shadow trashed it.

At first, being a responsible and reasonable owner I assumed she must be bored – despite having the run of the house and courtyard and the company of Vinnie.  Cue large quantities of doggy toys shipped from the UK including hollow kongs that can be filled with peanut butter and treats to keep her busy whilst I was out.  Shadow with her foot long tongue would empty the kong in seconds and then trash the garden and maybe eat the pool net to stress the point.

I thought she might be bucking for pack leader so I tried bollocking her when I came home and found bare earth, scattered blooms and Shadow asleep under the Rosemary bush.  If I shouted at her Shadow would wee herself, slink belly down to her basket and refuse eye contact for twenty four hours, then dig up the lavender bush if I went to see the accountant!

It got tedious, fast!  In the end I decided to stop being so right on about it and we banged a hook into the terrace wall and Shadow has to go on the chain on those rare occasions when I have to go out without her.  She doesn’t like it, but she has her cushions, she has the shade of the huge parasol and the wisteria, she has Evils draped around her for company when he wants it and she has Vinnie as backup.

For a while all was quiet and peaceful if a little sulky in the courtyard garden.  The flowers thrived, the allysum resumed tumbling over the bricks, the camellia bloomed, and the violets spread.  Then one night of frost in February clobbered the lot and I was back to square one again and Shadow gave me very old fashioned looks as I replanted the border yet again. 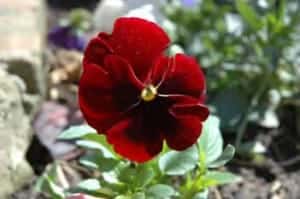 Then Spring came again and my seriously overplanted border burst into life and is rioting happily in the sunshine, colourful and healthy.  And when sometimes Evils crash lands in the peonies in pursuit of something pretty and fluttery at least he doesn’t do as much damage as Shadow who lies and watches him with elegantly crossed paws and smirks a little when he is shooed off. 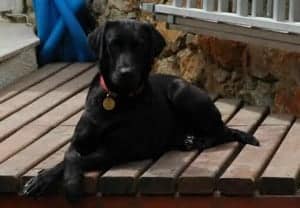