Yesterday I was rewriting the information booklet (ha, massive tome!) we leave in the studio for guests and thought I would take some extracts and put them on here.

This is a brief guide to the big attractions locally with a few prices, tips and personal opinions thrown in. They are by no means the only attractions but they are big ones that most people want to see.

Founded in the 10th century BC Ephesus has seen the rise and fall of great civilisations, the rise and fall of sea levels and the passing of Kings and Heroes. Originally a port city it is now a couple of kilometres inland from Pamucak beach due to the silting up of its port.

The ruins are accessible and extraordinary with the Library of Celsus and the Amphitheatre being awe inspiring. The undercover Terrace Houses are also worth the extra price for entry as the mosaics are excellent.

Entrance fee is 20tl, credit cards and foreign currency aren’t normally accepted and I think the extra fee to visit the terrace houses is 15tl. There are guides and recorded commentaries available for hire at the entrance or you can follow a group and eavesdrop 

Guided tours are available from Kusadasi and Selcuk, most will pick you up and drop your off and include several stops, not just Ephesus, and it’s best to check that one of the stops won’t be a commercial one designed to sell you stuff. Good guides are often archaeology students and can give some amazing insights so it’s worth checking the credentials of your guide.

In addition to the obvious attractions of the Library and the Amphitheatre there are some really interesting minor attractions, the hexagonal Tomb of Arsinoe, sister to Cleopatra is one of them. Banished to the nearby Temple of Artemis by Julius Caesar following a revolt against her sister she was later murdered on the steps of the temple at the orders of Mark Anthony. It is worth asking your guide to point out the tomb and talk you through the story as it has some really interesting features and is a tragic and dramatic tale and I used it last year as part of the storyline I was commissioned to write for a computer game (useless bit of trivia).

The ruins themselves have very few closed off areas and even if you take a guided tour it is nice to explore on your own afterwards to get a real sense of the place.

In Spring the area is carpeted with flowers and a beautiful place to spend the day, in Summer the heat becomes particularly fierce and an early visit is definitely the best plan before spending the middle of the day somewhere cooler.

House of the Virgin Mary

Further up the mountain, surrounded by pine trees and looking out over the Aegean Sea is The House of the Virgin Mary.

The stories surrounding Meryemana as it is called in Turkish are amazing and whether you believe them or not the place does have a very special atmosphere and is tranquil and evocative.

This is believed to be the last home of the Virgin Mary and she was alleged to have been brought here by Saint John following the death of Christ and here she lived, within a small Christian community, until she died. It is an important site of pilgrimage for both Christian and Muslim.

The ruins of a small stone chapel were discovered in 1881 by a priest who was following the directions a German nun, Sister Anne Catherine Emmerich, received in a vision. His initial discovery wasn’t taken seriously but ten years later, following the same directions, two missionaries from Izmir (Smyrna as it was then) rediscovered the ruins and speaking to local people discovered the building had been venerated for centuries by a certain village whose people believed they were descended from early Christians.

Meryemana is now a place of pilgrimage, several popes have visited and said Mass there and there is a resident priest and several nuns tending the shrine. There is a mass every Sunday and visitors are welcome and on Holy Days and particularly the 15th August (The Assumption of Mary) the small church is thronged and mass is often said outside.

Access to The Virgin’s House is via a steep, twisting, turning road. It isn’t really walkable from Ephesus unless you are very fit! The site is high up in the mountains around Ephesus and the road up offers amazing views of the town of Selcuk and the crusader castle. Entrance is 20tl, again in local currency, and it is a lovely place to spend a few hours even though the site is small.

A visit to Ephesus in the morning followed by a visit to Meryemana in the afternoon would make sense, it’s cooler up amongst the pine trees and the small café on your left as you enter the site does a very reasonable, non rip off lunch!

I have to say I am not a major fan of Selcuk Museum. I think it could be done a lot better. That said it would be a shame not to see the two statues of Artemis that form the highlight of the museum and the model of the Temple of Artemis as it would have originally been is interesting.

I think my main gripe about the museum is that there just isn’t much info on the artefacts; it doesn’t make much of an effort with some amazing things and it lacks the sense of wonder I think it should have.

That said it doesn’t cost much to enter, it’s close to the Basilica of St John and visiting it can give some welcome relief from the heat of the day and a chance to see some of the monumental pieces discovered at Ephesus and deemed too valuable to be left on site.

As you enter Selcuk from the lower entrance to Ephesus, before you get to the first big roundabout, the museum is on your left by the tourist information office. It’s normally closed on a Monday.

Once one of the Seven Wonders of the World the Temple of Artemis just outside Ephesus was an extraordinary building, built and destroyed three times its ruins were lost beneath the sifting silt of the Mendares River that closed the port at Ephesus. When archaeologists went looking for the ruins it took them sixty years to find what remains.

Antipater of Sidon, who compiled the list of the Seven Wonders, describes the finished temple: “I have set eyes on the wall of lofty Babylon on which is a road for chariots, and the statue of Zeus by the Alpheus, and the hanging gardens, and the colossus of the Sun, and the huge labour of the high pyramids, and the vast tomb of Mausolus; but when I saw the house of Artemis that mounted to the clouds, those other marvels lost their brilliancy, and I said, “Lo, apart from Olympus, the Sun never looked on aught so grand”.

Very little remains of the original temple, there is a reconstructed column made up of bits from various eras and at certain times of year the temple floor is exposed but the site is prone to flooding, particularly in Spring. The main columns of the temple either sank beneath the silt or were reused in other buildings (including Hagia Sophia) and the major archaeological finds are to be found in the British Museum.

Makes you wonder why anyone goes there! Well it is an incredibly spiritual place, a sacred place, where female goddesses in all their various forms were worshipped for eons. It burnt to the ground on the night Alexander the Great was born, it once was the centre of a fascinating religion and its journey through history makes it worth the visit. 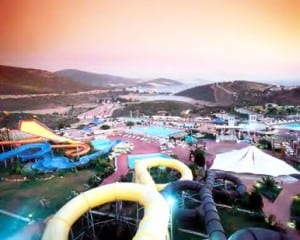 When you are worn out with ancient history this local attraction makes for a cool and pleasant day out. Adaland, situated just outside Kusadasi on the road to Pamucak beach, is now Europe’s largest water park with slides, flumes, lazy rivers and plenty of relaxing spots to sunbath and enjoy lunch.

Attached to the waterpark itself there is Seapark which is an interactive aquarium where visitors are given a shortie wetsuit and snorkel gear on arrival and can spend all day swimming with the fish on an artificial coral reef or with sting rays in a tank. There are also various aquariums and salt water pools to explore and plenty of sunbathing spots.

The Aquapark costs 40tl each per day and the Seapark 60tl each per day if you book direct or pay at the gate but it is worth checking the price with the tour agencies down in Kusadasi as sometimes they have special offers and they can include a pick up and drop off service.

You aren’t allowed to bring food into the parks but I don’t think prices are too bad in there.

In the summer bring a t-shirt to wear over your swimming costume or you can get seriously burnt!

There is another waterpark just half a mile from Adaland and this is Aquafantasy, attached to the all inclusive Aquafantasy Hotel. They do daily passes and the price is 22Euros per day.

Those are the big attractions, which is not to diminish wonderful places like Priene, scenic days out at the Millipark, Bafa Lake or longer trips like Pammukale. I cover them in other parts of the guest guide along with markets, Turkish baths, beaches and restaurants. I’ll try and include those sections in later blog posts.