Well I’m back from two frantic weeks in the UK.  On 3rd July I went to my daughter Naomi’s graduation at St David’s Cathedral which was really awe inspiring, – how many 21 year olds get to have their graduation ceremony in a 6th Century Cathedral?  What a location to instil a sense of occasion in the graduates! 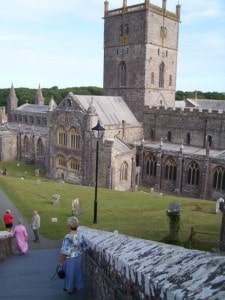 I am so proud of her, she looked amazing and has achieved so much, putting herself through college and turning into a great designer whilst working to support herself and all the time keeping my UK house in order. 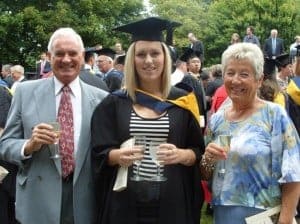 Now she is off out into the world to get paid for stuff and one day she will maybe get it through her head exactly how good a designer she is!

Back in Kirazli the heat by day is like a warm blanket wrapped round you and at night a new moon glows orange and perches on the top of the mosque minaret before sliding towards the sea through a smattering of stars.

Evil’s is furious with me for leaving him to slum it with only one full time and one part time slave and so ignored me for a day or so but after being hand fed chicken breast agreed to let me stroke him again.  Shadow had forgotten me, because she’s thick.  Vinnie was impressed with the roasted pig’s ears I brought back for him but less impressed with the worming medication we forced down him!

Now the rest of the summer stretches ahead, hot days and short nights and trial by Ramazan for the villagers who will test their character by enduring the annual fast during the hottest part of the summer.  I think the whole place will go nocturnal because the only way to make it through will be to sleep all day.

Down in Kusadasi tourist season is in full swing and flying into Bodrum the other night on a plane that smelt mainly of fake tan I saw the skytrackers from the night clubs and beach bars up and down the coast lighting up the sky like London during the blitz.  So many customers, so short a time to make enough money to survive the off season, but Turkey is popular this year and hopefully it will be a good season for the hotels and bars.

Here in Kirazli the only indication that the season is in full swing is the mournful call of the cruise ships as they sound their horns at 5pm, ready for departure, moving on across the Aegean, next stop Santorini.  I don’t think one day here would ever be enough!