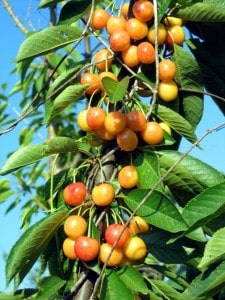 We have a lovely guy staying with us at the moment; he really wants to experience village life and so yesterday he volunteered to go cherry picking with our farmer friend Ahmet. He returned last night from a day in the orchards with a good few kilos of cherries, a slight stomach ache from having eaten too many and no room for dinner as lunch had been massive.

Riddled with guilt because he has so far not got around to volunteered to help out in the orchards Nick decided to join them today. He dragged himself out of bed at 6am this morning and surged off full of the spirit of manly competition to top yesterdays cherry picking tally.

He returned this evening sweaty and dirty and just fell into the pool to cool off but having had a whale of a time and picked 350 kilos of cherries. 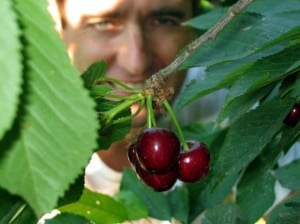 In the middle of the tree

Ahmet grows several varieties of cherries, some are exported and some are sold locally with the big hotels in town currently going through cherries faster than he can pick them. With only himself and his sister and two part time workers he was glad of the extra hands.

They seem to be averaging 60-70 kilos of cherries per tree and the harvest is good this year although the sudden thunderstorms we are having aren’t doing the ripe fruit any favours and time is running out for some of the harvest. 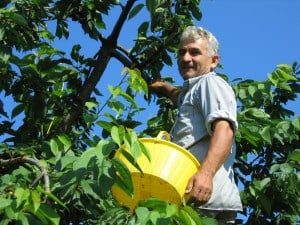 Picking started at 8am with breaks to transport the cherries to the fruit hali down town whenever they had a full load, so basically if you are in a hotel in Kusadasi you are getting cherries within a couple of hours of them being picked. Nick and our guest went along to see the selling and arguing over prices and quality and the close scrutinising of the scales that accompanied the delivery.

Lunch was at 1pm with them each being given an entire loaf each stuffed with chicken, peppers, cheese and cucumbers, washed down with coca cola and eaten in the dappled shade of the orchards while the stove brewed tea. 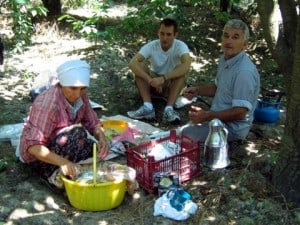 Lunch in the orchards

Our guest was telling us that apparently people will actually pay for the opportunity to go and pick cherries or figs or grapes and work on organic farms like Ahmets! Coming from a farming community myself I find this idea a little bit mad – I thought people became lawyers and accountants so they didn’t have to work in fields. I’m pretty sure if I went down the tea shop and tried to explain to the farmers that people from other countries would pay to come and pick their fruit they’d laugh themselves sick.

No doubt Nick is going to be aching like mad tomorrow and there will be much moaning and groaning but right now he is feeling good; laved by the sunlight and the hard work and with a warm sense of wellbeing, which, on reflection, may explain why people are happy to pay to do this kind of thing if they are trapped in an office for most of the year.

If you are interested in working on organic farms this link is useful – World Wide Opportunities on Organic Farms– or alternatively you can come and stay here and I’ll organise it for nothing, because the fig season is fast approaching!