Posted in Living in Turkey, Renovations, Building and Property in Turkey 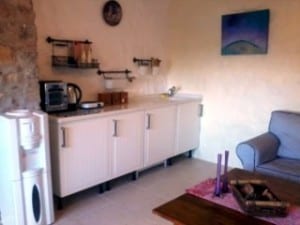 My husband had this thing about designing houses, he wanted them to have “value added” and be, as far as possible, “future proof”; in other words whatever we designed had to be more than ordinary and preferably capable of generating income and it had to be flexible enough to accommodate future changes someone may wish to make to it.

It’s a good philosophy and most of the time it works but sometimes it doesn’t because even he couldn’t see the future clearly and so my Pembrokeshire house has 3 kilometres of cable in it which is now largely redundant due to the invention of wifi!

Ah well, sometimes you get it wrong but as a basic principle it’s sound, which is why, seven years ago, when I sat down to design this house I didn’t know what the future would bring and what the studio wing would become and I had to plan accordingly. It could have been an art gallery or treatment rooms for a little spa or a self contained apartment. To be on the safe side we put in a spare drainage system and hot and cold water so a full kitchen or an additional bathroom could be added at a later point and we built them into the complicated multi level building that is now my home and then blanked them off and forgot about them. 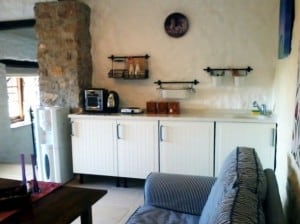 This winter I decided we should put a proper kitchen into the studio for the convenience of the guests and so I got to test my own future proofing to see if what we laid down all those years ago actually worked.

The original plans to this house are filed away in the attic of my Pembrokeshire home, locked in the dark until the day I go back there, and my memories are a little hazy given all that has happened between now and then. But I remembered where the water outlets were and where the blanked off drain was and I remembered how the pipes are laid through the house so if the worst happened and they were found to be blocked we would know where to look if we had to clear them.

The worst didn’t happen. The opened up drain ran clear and fast, the hot and cold water flowed, and wasn’t even back to front, and I sort of impressed myself that seven years on it did what it was supposed to do! This is Turkey, honestly, this is pretty impressive stuff!

It was good to be building things again, even something as simple as a small kitchen – if doing anything in Turkey is simple. Ikea for the cabinets, the saniye for the mermerite worksurface, Arcelik for a revolutionary build in fridge (Ankastre Tezgah Alti – built in, built under), kitchen taps from Baumax and Esse in Bornova Forum for pretty oil pourers and kitchen accessories. It felt right to be back drawing and measuring and being practical again. I remember how much I love doing this, taking an idea and making it real, it boosted my forgotten confidence no end.

Amusing aside – amongst my many, many tools I have a Makita scanner which not only measures distances with a laser and works out square and cubic meterage but it also detects metal and cabling in walls which is very useful in Turkey where trunking is a flimsy thing and cables run any old how across the walls. Nick was using it to check the location of the cable running from a socket on the new kitchen wall before he put hanging rails up and the machine was going nuts, buzzing and vibrating urgent warnings. Beloved husband never ran cables diagonally across walls, he only ever ran them down, in a straight line, there was no way there was anything in the wall but the machine insisted there was. “Is there rebar in this wall?” asked Nick.
“No, that’s a gazbaton wall, the rebar is in the columns here and here” I pointed to the left and right of the new kitchen. The machine called me a liar and elevated it’s alarm level to dog disturbing pitch.
“Well there’s something there.” said Nick taking the scanner off the wall and squinting at it. It kept buzzing.
“I think it’s found the metal plate in your hand!” I suggested.
Note to users, don’t use a scanner with a hand that has been extensively repaired with screws and plates. We spent an amusing five minutes seeing which other parts of Nick will set off the alarms – he’s had a lot of accidents. 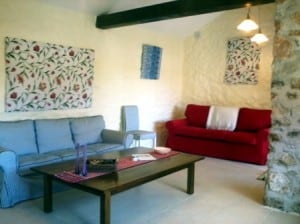 Nick and I didn’t kill each other in the process of building the new kitchen. We brought a little project in under budget and in something under a week and that included a new sofa bed so the studio will now sleep four instead of two. We adapted and argued a bit and learnt more about how each other works and adding this to previous little projects like grouting the pool and decorating the house I think it’s time we did something bigger together.