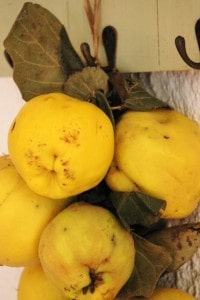 There is no more depressing sight for me than my worktops covered with the fuzzy golden green lumps of quinces. Whilst Hugh Fernley Whitteringaway raves about them in The Telegraph and assorted British chefs who aren’t swamped by tonnes of the misshapen things write hymns to their history and subtle perfume I’d be quite happy if I never had another one in my life.

In the UK the quince is comparatively rare these days, they have vanished from orchards and fields as surely as ducking stools have vanished from village ponds (and indeed the ponds have gone too, replaced by cricket pitches and lately additional car parking). They are an old fruit, a little misunderstood, but capable of arousing passion and nostalgia in the hearts of those with a classical education and an educated palate (I don’t have one of those).

Anyone with a passing interest in myth and legend will happily bang on for hours about how the quince is probably the “apple” mentioned in every bible story and ancient legend from Adam and Eve in Eden to pretty boy Paris annoying Goddess’s on a hillside prior to the battle for Troy. You can lay a lot of shit at the door of this fruit!

Here in Turkey quinces grow like weeds, they love the open sunlight and rich soil of the valley bottom and we are inundated with them. I dislike them because honestly there isn’t an awful lot you can do with them and I will normally cut myself at some point peeling the wretched awkward things.

In the past I have made quince jelly (good with cold meat and cheese) and I have hung plaited strings of them in the kitchen where they look pretty but eventually end up being chucked out because I haven’t used them. They make me feel bad, which is really my fundamental problem with quince. I can’t find enough uses for them to justify the huge number I am given.

This year I hope I have a solution. Because quince goes so well with rich meat dishes I have poached them in syrup and frozen them to use in tagines and casseroles during the winter months and I have packed sliced ginger into a thick quince syrup which I hope will result in a crystallized ginger type thing in a few weeks – the jury is out on that, we’ll have to wait and see what happens, I may need to boil it up a couple of times but I really miss crystallised ginger. 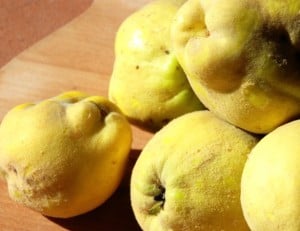 Quince takes some fiddly preparation and a lot of cooking and the quinces we have here are not the perfect specimens you lucky people with access to supermarkets get. Our quinces do tend to be inhabited! So peeling and cooking quince involves first rubbing the fur off, then peeling them with a potato peeler, then chopping them up and getting them into lemon water as soon as possible as quince oxidises and goes brown in seconds, all the while keeping a sharp eye out for fly holes and maggots. To be honest I probably throw a good half of the fruit away in this process.

After scrutiny and eviction of crawly things what you have left is chunks of a mealy kind of apple that is hard and sour when raw and needs long gentle cooking. This year I poached mine in a sugar, honey, lemon and ginger.

Just cover the uncooked quince with water, add a dash of lemon, a tablespoon or so of honey and an inch of grated ginger, bring it up to the boil and then simmer very gently for an hour until the fruit turns from pale cream colour to rose. Then drain the quince and boil the syrup vigorously until it is thick and bright red.

I have frozen my poached quince, covered in a layer of syrup, and I’ll use it later in the year. It makes an interesting addition to meat dishes, particularly those using Persian and Moroccan influences, giving a subtle enhanced sweet flavour to the spice mixes. As it is ready poached it can also quickly be turned into a relish to go with cold meat at Christmas or with a few additions into a sweet pie filling.

Maybe I shouldn’t be so hard on quinces, I will actually use them in various things now I have prepared them, and as an ancient symbol of love and fertility I guess I should honour them. Maybe they are like love, worth the effort in the end.