Can I say, right from the offset, that I feel really uncomfortable about a business that uses captive dolphins to make money which is something Adaland does. This isn’t a reflection of the type of care the dolphins receive it’s just I don’t like the whole idea, it doesn’t sit well with me but I appreciate that other people don’t feel the same way I do and when my daughter and her boyfriend visited us and wanted to go to a waterpark we chose Adaland as I hadn’t been before and I wanted to see what it was like.

My last waterpark experience was Wet ‘n Wild in Florida so Adaland had quite tough comparison to go up against and I came away feeling a bit torn about the whole thing. On the plus side it is amazingly clean and well maintained and the staff are really lovely, on the negative side it seems to have an aversion to signage and the food, what there was of it, was bad. Price for the day was 20 Euros each but we got a discount from a agency downtown, probably because it was early in the season and we didn’t need transport to the park.

We had a day there just after they opened for the season and the place was pretty much deserted. Nick had to ask them to turn several of the slides on as by mid morning they hadn’t been started. The water in the pools and the slides was a little cold but you have to expect that early in the season, I’m sure it’s like a bath now as the temperature warms up.

The pools were immaculate, in fact the whole place was, and the staff were friendly and helpful and there were a lot of them, in fact they outnumbered the guests. Every pool had a duty lifeguard with wrap around rescue tube and there were staff constantly present at the top and bottom of every slide.

On the negative side the music played constantly throughout the park was annoying and intrusive and whilst blaring techno might encourage a party atmosphere in the height of summer in early Spring it isn’t going to make a party happen and is better turned off or at least change the soundtrack to something more universally appealing.

The lockers available are small and you’d need several for a family visit and locker keys don’t have wrist bands on them and so losing them is easy, as is the little plastic card you have to charge with money to buy anything in the park (no cash inside, no refunds on lost cards). There aren’t any maps of the park available or “you are here” boards inside and so finding your way around and deciding what rides are suitable for which age group is very much a trial and error thing. As the place was almost deserted it wasn’t a problem for us but when crowded in summer it wouldn’t be helpful.

Only one food outlet was open when we were there and it was really bad, over priced and poor quality with a small microwaved burger priced at 13tl and a soft drink in a can at 5.5tl. Given the choice of produce we have here it doesn’t do the park any favours to serve this kind of stuff at these prices.

My daughter, her boyfriend and I enjoyed the day, Nick didn’t. He really objects to over priced, poor food, he found the thumping music really annoying and he didn’t like having to ask the management to turn the slides on.

I loved that there were no queues and I appreciated the cleanliness and the amount of work that goes into maintaining a place like this and I value any Turkish business that invests in its development like Adaland has over recent years. Most business’ like this rest on their laurels but Adaland seems to be trying to improve and expand and add more facilities and whilst I personally object to the dolphin side of things I think the Sealand part of their business, with an interactive aquarium, is a nice direction to go in and if it had been later in the season we would have chosen to go there rather than the Aquapark.

I stayed well away from the dolphin show but my daughter’s boyfriend went, paying an extra 15 euros to see it. I think he enjoyed it but didn’t say too much about it as he knows I object.

All in all I think if you have children over eight years old it’s going to be a fun day out in the heat of summer, be prepared for high priced snacks and take plenty of sun cream as even I burnt there in May and I never burn! I’d like to try Aquafantasy next time and compare the two but cost of snacks aside you do get a whole day of varied fun for a reasonable cost and there are plentiful loungers and varying depths of pool to suit all ages. 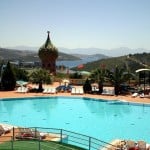 The main pool at Adaland 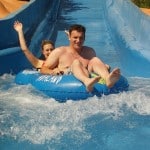 One of the two man raft slides at Adaland 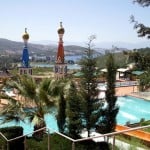 View from the path up to the tube slides 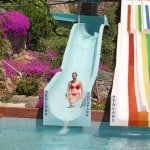 One of the slides at Adaland