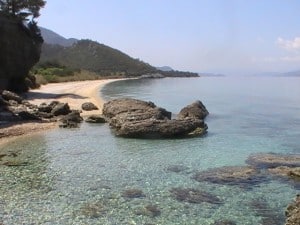 Millipark, part of the slow path

When people come and stay with us they are normally here for a few days, usually four at the most. We attract independent travellers, most of them are on a grand circuit of Turkey and we’re the accommodation option for the Ephesus leg of the trip. So they stay with us, see Ephesus, see Selcuk’s attractions, see Pammukale, pop up to Sirince, and then either head north to catch their flight from Izmir to Istanbul, head east towards Cappadocia or south along the Aegean coast

A recent guest was different; he was here for three weeks and really soaked up the atmosphere. Some days he slept late and then walked the valley and the hills, hiking through the pine forests and up Gul Dar. Some days he got up early and had a trip out to Bodrum or Pammukale. He picked cherries with the farmers, he shopped in the market with us, he drank cay and ate gozleme by the fireside of the little village restaurants as they are closing, he went snorkelling in the millipark and was growled at by a wild boar, he had lifts back to the house on the back of the village boy’s motorbikes. In short he settled in and really experienced it all at a pace that made it fun.

Not everyone has the luxury of doing that, especially for our American friends who have really limited holiday allowances, Turkey is a trip of a lifetime and they want to make the most of it so they try and cram so much in. And I can understand that, but they would get so much more from it if they just slowed down a little.

This is a great, big, sprawling, beautiful country and you can’t do it all in a week or a fortnight or even a decade, you sort of have to accept that at the start. Some of the itineraries I see posted online for comment make me want to weep with exhaustion, particularly the ones on trip advisor and lonely planet where gung ho travellers post a minute by minute schedule of their upcoming trip with accompanying questions micromanaging the minutiae of every minute of every day – 7am arrive Istanbul Attaturk Airport, 7.31am exit airport and take taxi to Taksim square (how much?), 8.03am arrive Taksim square, (suggestions for best place to get a snack?) etc etc. It’s just exhausting and it bypasses all the truly great things about this country and treats it as a series of postcards to be viewed and takes all the real adventure away.

I’m not saying you shouldn’t plan or that you should spend all your remaining holidays exploring Turkey, although you probably could, but I am saying that this country is much more than a list of “must sees” that have to be ticked off in order to feel you have experienced it. If you are determined to hit every major archeologically site in Turkey and every major geological site, it will all blur together and your only lasting memory will be heat and fallen columns and the bobbing crocodile of different types of hats worn by the people in front of you on every organised tour you took. 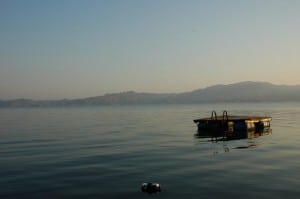 Bafa Lake at dawn, worth slowing down for

The lasting memories are in the little moments, the slow moments, and they are often to be found in the days between the big experiences you planned (and you really should give yourself days off between big sites, in the heat of summer you need several days off).

You’ll make the memories in that spur of the minute boat trip that took you to azure blue coves, that impulsive turn onto a dirt track that led to a cove where there was a little restaurant that cooked fish over an open fire, that off the cuff decision to stop in that little unnamed village where you spent the afternoon lounging on cushions in a sofrasi eating grapes washed in spring water and watching the sun on the vines.

For our new friend one of his most memorable moments wasn’t the balloon ride in Cappadocia, although it was fantastic, the memory he takes away with him was the following morning when he got up early and hiked out to a deserted hilltop at sunrise and watched the multitude of hot air balloons rise up out of the crevasses and valleys in Cappadocia’s wrinkled landscape. All alone, just him and the dawn light and white rock and the silent rainbow of balloons rising slowly into a brightening sky. Making that type of memory is what travel is all about and you have to slow down to find it.