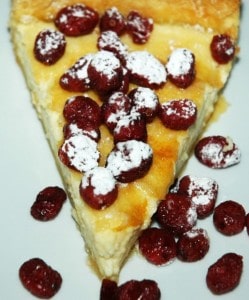 Thursday was market day in Fishguard when I was a child and my Gran would buy us custard tarts from the brilliant bakery stall; individual ones, with thick sweet pastry and a creamy wobbly filling of vanilla and nutmeg spiced custard.

We weren’t allowed sweets and so the custard tart was a big deal. I would eat it slowly, with a teaspoon, first the custard, carefully scraping every last bit from the pastry shell and then the case itself, crisp and sweet. I loved them and so did my brother (I wonder does he still eat them? I doubt it, he looks like Gary Barlow and it takes a lot of effort and I think custard tarts are banned).

I was flicking through recipes the other day and was considering an American recipe for a milk tart with granola topping (muesli to us) and I thought, no, I’ll do a proper custard tart, so comforting at this time of year. I asked Nick if he liked them, and he did, and so the choice was small individual ones or one giant one – no contest really if Nick likes the idea, giant one it is.

Custard tart may not be the most lightweight of recipes for those starting the New Year on a starvation kick but it’s easy to digest after all the Christmas indigestion and it’s comforting in the depths of winter.

Round about now my lovely husband would have been doing an excruciating impression of Thora Hird in an Alan Bennett play commenting on the shortness of the pastry as she brushes crumbs off her tweed skirt, because this is, apparently, for those old enough to care, a very short pastry – in other words crumbly and allegedly hell to work with. Personally I don’t worry too much about pastry, I find it easy because I’m too lazy to over work it which makes it tough and I always use all butter so it taste good.

Put 180 grams of plain flour in a bowl with 30 grams of icing sugar and grate in 100 grams of really cold butter (sneaky cheat). Rub it between your fingers until it’s breadcrumby. Mix the yolk of an egg with a couple of tablespoons of cold water and pour into the flour. Stir with a butter knife to combine and then tip it out on the work surface and squash it all together until it forms a single lump.

Wrap it in clingfilm and bung it in the fridge for a while – go and watch episode of The Simpsons (22 minutes).

When its time to roll the pastry out make sure you have loads of flour on the work surface because this pastry does get sticky quickly. Roll it out enough to line an 8inch flan dish (loose bottomed is best) and bake blind for twenty minutes in a medium oven. I prick the bottom of the pastry and give it a quick brush with egg wash if its getting a really wet filling like this is.

250ml milk
200ml cream
A good, generous grating of nutmeg (I used half a whole one because I love nutmeg)
Two tablespoons corn flour
Two tablespoons sugar
One teaspoon of vanilla essence
Three whole eggs and the white of the egg yolk you used in the pastry whisked lightly in a large bowl.

Put everything bar the eggs in a saucepan and stir gently as you bring it up to scalding point – till it steams a bit, but doesn’t boil – pour the milky stuff onto the whisked eggs. Whisk briskly for a few minutes then pour into the pastry case and put in the oven for about 40 minutes (two episodes of The Simpsons or one episode of House or the wedding scene in Breaking Dawn but that feels lots longer).

Once cooled scatter with dried cranberries and a sift of icing sugar. Alternatively you can make a syrup with the dried cranberries, a splash of wine and some sugar and spice and serve that with the custard tart.

I miss bakery stalls in old town halls. I don’t even know if the Thursday market still runs in Fishguard and the smiley old baker who called every housewife “Cariad” (darling in Welsh) must be long gone. But I remember his custard tarts and his rich dark squashy squares of bread pudding and his apples slices generously scattered with crunchy confectioner’s sugar and I miss them still.