Beetroot was, to me, one of those things old people ate in the 1970’s. Like brawn, or tongue, or cockles in a small bumpy jar. Also, to be honest, I found it rather intimidating, it was going to turn me purple, it was going to turn my wee purple and I thought you had to cook it for a week. So yes, I had a fairly significant beetroot prejudice and it was only this year that I decided I had better put that to one side and try and cook the damn things as part of my Turkish Yearbook experiment in seasonal cooking.

Turns out beetroot is a lot less fuss than I thought and if you cook it unpeeled, either roasted or boiled, it is then easy to handle, sweet and delish, pretty, and packed full of nutrients. It is also ever so on trend as according to The Telegraph purple food is in!

Here I’ve tried a rather unusual sweet chutney recipe that makes an amazingly coloured preserve, and a roast beetroot and garlic recipe which is surprising sophisticated and light years away from the sour pickled beetroot that stained our plates as children.

This recipe uses one of my favourite flavours, roast garlic, and the sweetness of the garlic and the beetroot contrasts with the richness of the balsamic glaze. If you can’t be bothered to do a glaze just roast beetroot with unpeeled cloves of garlic then serve simply sliced with a drizzle of good olive oil.

Basically you take all of the above, throw them in a high sided baking tin, shake around until every thing is coated in the oil and put in a medium oven for about an hour to hour and a half. The beets will be cooked when a skewer passes through them easily. 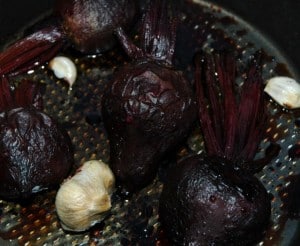 Unpeeled beets and garlic, slowly roasted and ready to peel

Remove from the oven, wait until the beets and onions are cool enough to handle and then rub their skins off, slice them thinly (I use an egg slicer if they’re not too big) and arrange in a shallow dish.

Put the baking tin you cooked the beets in onto the hob over a low heat, add a splash of balsamic vinegar and chicken stock (around two tablespoons balsamic and four tablespoons stock) and using a spatula scrape all the flavours of oil and beets and onions off the base of the pan to combine. Squash the garlic cloves and fish out their skins as the glaze cooks.

Let the glaze cook down until it is syrupy and then pour over the beets and onions. 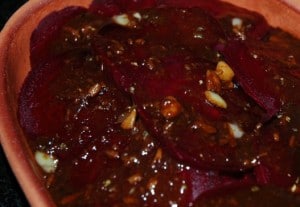 Can be served either hot or cold, as part of a selection of mezes or as an accompaniment to cold meats and salads.

This is so easy and so incredibly pretty and has an amazing rich flavour.

Its not going to take long to write this bit! 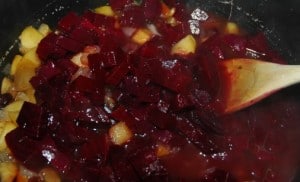 Everything into the pan and boil until thick!

Put everything apart from the beetroot into a saucepan and bring to the boil, simmer for 20 minutes. Now add beetroot, bring back to the boil and simmer until it goes thick then pour into warm, sterilised jars. Allow to cool and then put the lids on and store. 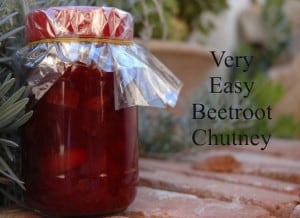 I’m really feeling a lot more confident about finding ways to make the most of the seasonal vegetables and fruit I find on the market stalls. In addition to the beetroots themselves I’ve also been using their long leafy greens in salads both cold and warm and treated them like spinach and briefly wilted them to form the base of a baked egg dish which went down really well.