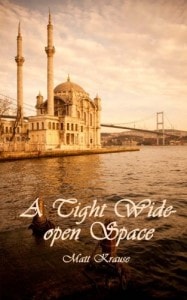 By some strange coincidence this week seems to be all about books and writing, particularly books from Turkey and writing in Turkey. It wasn’t planned that way, it just happened.

Today I have a guest post from Matt Krause, author of the newly published and highly recommended “A Tight Wide-Open Space: finding love in a Muslim Land”.

Food is a big part of any long term resident’s experience of Turkey and Matt is no different, here Matt talks about sucuk, the highly individually, highly spiced, sausage so prized by Turks.

When I first moved to Turkey I wouldn’t touch sucuk, the Turkish breakfast sausage. I wouldn’t go near it even if my life depended on it. There was something about the spices that just seemed so… off.

Don’t get me wrong, I loved plenty of other Turkish foods. On my first day in Istanbul I eagerly devoured patatesli gozleme and etli durum, two street foods I could munch on while walking around touring the city. I was nervous, a little scared, a little disoriented, having just moved to a strange land, and both foods tasted instinctively familiar. They told me not to worry, that I had washed ashore in the Land of Comfort Food. They told me all would be well. That first day I also drank ayran, which tasted strange until I realized it was just yogurt, salt, and water. As soon as I saw it that way I was hooked on it. In fact, in the years to come I would sometimes take just-purchased ayran and skulk around in dark corners like a drug addict, drinking gallons of it straight from the jug before heading home as if nothing had happened.

My love for Turkish food didn’t stop at simple street snacks and drinkable yogurt. A few weeks after I arrived in Turkey my girlfriend and I visited her old university town of Bursa. We stopped at a local restaurant for lunch and ordered Iskender, meat shaved from a spit and laid out over thick chunks of pita bread, topped with melted butter and tomato sauce, with a big scoop of yogurt on the side. I was helpless against an offering of comfort food like this. And then as if my helplessness was not enough, the waiter brought us tall glasses of a pulpy purple grape juice so fresh it tasted even more grapey than actual grapes. Drinking that juice was like injecting crack cocaine straight into my brain.

Sucuk, however, just didn’t work for me. I couldn’t stand the smell of it. Ugh, those spices, they just seemed so… foreign.

Then one day in my third year in Turkey I started loving sucuk. The change came suddenly. I don’t know what happened. All I know is one day I found myself unable to get enough of the stuff. At Sunday brunch my girlfriend’s mother, by that time my soon-to-be mother-in-law, brought the plate of sucuk to the table. Instead of shrinking from it I found myself thinking, “Is she serious, is that all? What are these other people going to eat?”

In the weeks to come I would try not to be greedy, politely passing the plates of sucuk around the table first, trying to act restrained and nonchalant even though an alarm in my head was screaming, “Alert, alert, sucuk, sucuk, eat it now.” Sometimes when the plate of sucuk made its way back to me the remaining pieces didn’t even make it onto my plate, they’d disappear straight into my mouth.

I am not sure why my feelings about sucuk changed. I think it had something to do with my accepting Turkey into my heart. From the start I loved being in Turkey, but there was a part of me that would not accept that another place could feel like home. Then one day I decided to give up, to stop resisting. I allowed Turkey into my heart. I gave it the green light to change me however it was going to change me. And apparently, one of its first priorities was to make me a sucuk lover.

I’ve been back in the US for a couple years, so I haven’t had sucuk in a while. But I plan on returning to Turkey next year, and you bet that on my first morning back I am going to order a big, sizzling pan of sucuklu yumurta, eggs cooked sunnyside-up around slices of sucuk. First, however, I need to refresh my Turkish, because I don’t remember how to say, “Go easy on the eggs.”

A Tight-Wide Open Space: Finding Love in a Muslim Land

A Tight Wide-open Space is the story of falling in love not only with a woman, but with a city and a country.

In 2003, when the shockwaves of 9/11 still echoed through the US and the country was fighting two wars in Muslim countries, Matt Krause met a beautiful Turkish woman on an airplane and decided to follow her to Turkey. This is the story of what happened there.

Adventures in Expat Land says, the book “stays with you, lingering in your subconscious. It’s akin to overhearing someone half-singing, half-whispering a dreamy, jazzy ballad to their beloved.”

You can buy Matt’s book on cross cultural love in Turkey here – Amazon – A Tight-Wide Open Space: Finding love in a Muslim Land