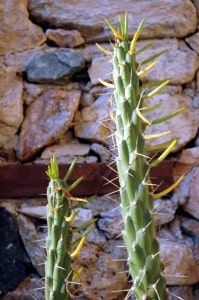 This is Hector, my cactus. I don’t remember how he got his name, I think it was Nick who named him, and I think even Achilles would think twice before taking him on.

He started life as a sweet and innocent little cactus in a pot in the flower border by the pool. He was about six inches high. His mission in life was to provide architectural interest to the border and to endure the neglect I lavish on all plants. Maybe it was some sense of his strength of character that made me confine Hector in a pot in the border, I doubt it was foresight, I don’t know that much about plants. Whatever it was it was just as well I did confine him because Hector thrived on the neglect heaped upon him in the first few years of his life as I flitted back and forth between the UK and Turkey. And he grew, and he grew and he grew.

Within two years he had outgrown the border and was in danger of impaling anyone who tried to get in the pool with his vicious two inch thorns. He had to be moved. So with trepidation, a smothering duvet and gritted teeth Hector’s small pot was levered out of the flower border and he was relocated to the safest corner of the terrace whilst I considered what to do with him. 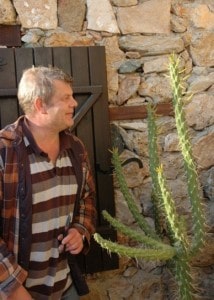 Hector reaching out to skewer Nick

Whilst the wounds we acquired moving him gradually healed Hector continued to grow. And I am now too scared to move him. Last year we thought the frost had killed him as a particularly vicious cold spell blighted his limbs and one fell off. The limb that fell off was rammed unceremoniously into the pot next to him and against all odds survived to become Son of Hector (or Astyanax as he prefers to be called!). He is now growing at an unseemly rate and attacks me when I weed the wisteria.

Hector is now over six foot tall and shows no signs of stopping. Soon the wisteria will flower and then be in leaf and his evil spikes will be cloaked by a softening layer of leaves. Beneath his summer cover of wisteria he will continue to lurk in the corner of the terrace to catch the unwary or the clumsy (that will be me).

Elsewhere my garden is mainly harmless and the spring sunshine is bringing everything on beautifully. It is a glorious day today, bright hot sunshine with fresh gusts of wind to shake the trees and send the blossom spiraling into the bright blue sky and glittering against the dark green of the pine trees. 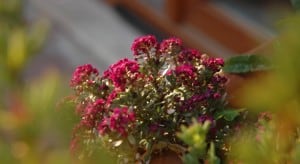 I love this sweet little plant

The neighbour’s tree has finally bloomed and the blossom is floating down into the pool like confetti. The wisteria will flower any day now and the piece of old column we found when we were building the house is shining in the bright sunlight. I stroke it every time I walk past it, I love that piece of column. 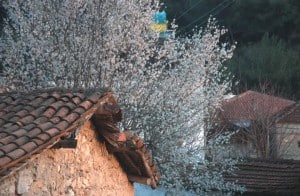 The neighbours tree finally blossoms and showers the pool in petals 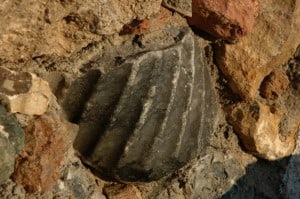 The old column in the wall

From pastel sunrise to Technicolor sunset the days are growing steadily warmer and we are all cheering up as the heat washes away winter’s aches and we know we have a good eight months of comforting, cuddling, cheering heat ahead of us. 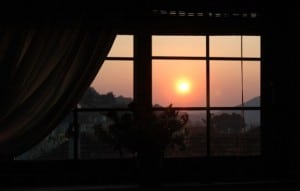 March sunset from my bedroom window

And best of all beloved daughter has managed to get time off work, has juggled all sorts of things and has booked a flight to come and visit Mama in a few weeks time. I am so excited! Time to kill a fatted calf in celebration or, as she is soppy about animals maybe I’ll just pickle Hector. She used to like pickled cactus when we were in Mexico. It’s a thought, now how do you pickle cactus????