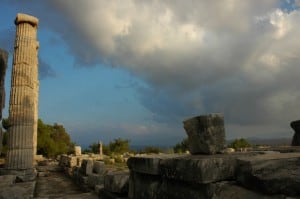 The Sacred City of Priene

The new road between Kirazli and Yaylakoy knocks half an hour off the trip to Soke plains and makes Priene, Miletos and Doganbey more accessible and ideal for a spur of the moment trip from the village.

I love Priene, it’s my favourite ancient site. Built on an escarpment of Mount Mycale, shaded by pine trees, lit by the golden light that spills over Soke plain and with far reaching views to the silver shallows between Dillek Millipark and Didim it has a gentle and romantic atmosphere. 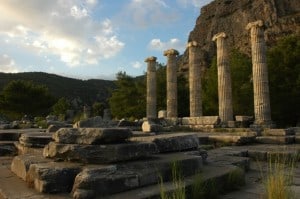 The temple of Athena Polias at Priene

Winter is the best time to visit, when on cool days under dramatic skies you often get the ruins to yourself and can wander through fields of tumbled columns, down ancient roadways and through empty amphitheatres with nothing to disturb your contemplation of the ancient.

Priene has escaped the relentless commercialism that has encroached on other ancient sites, well enough away from the noise of busy roads it also doesn’t have any of the ubiquitous tat merchants that mock the entrance to Ephesus with their gaudy stalls of genuine fake watches and have ruined the approach to the Hittite cities with their complex of booths selling glittery souvenirs. Instead Priene is quiet and calm and still offers a sense of the mystical as it waits out the centuries watching the sea levels rise and fall and civilisations come and go. 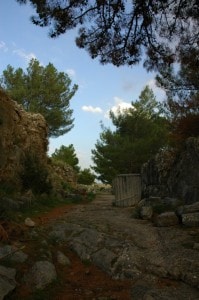 The ruins we see now date from around 3rd century BC and the five resurrected columns are all that remain of the revered Temple of Athena Polias, which was paid for, in part, by Alexander the Great and designed by the mighty Pythius who also designed the Mausoleum of Halicarnassus – he was busy that century, up and down the Aegean coast, gifting history with Hellenic architecture.

As a city state Priene didn’t exactly rock the ancient world, small and bijou with at most only 6000 inhabitants it didn’t have the political prominence of Ephesus and its unfortunate geographical location above a continuously silting river that blocked its sea access with monotonous regularity meant it would never be a hub of trade. 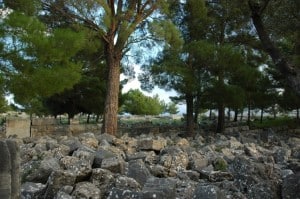 Amongst the pine trees, jumbled ruins

But Priene was beautiful and it was wealthy. The personal attention of Alexander the Great and the patronage of Mausolus who wanted Priene to be a model city saw to that. Private citizens built fine homes here and donated public buildings which formed part of the city’s elegantly planned centre.

Priene’s golden age passed with Alexander, its population declined and whilst it was a pawn in various struggles over the coming centuries it never again received the attentions of men whose footsteps shook the world. It slid into history, not poor, not defeated, just quietly declining. 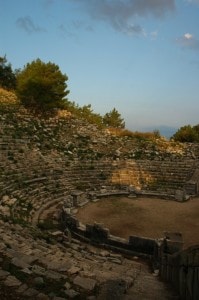 That’s Priene really, it’s quiet. A quiet place, where the centuries are piled softly upon each other, the tread of generations are muffled under the drifts of pine needles, the sharp edges of dressed stone are worn away by eons of rain and twenty three centuries of sunlight have given the empty streets a golden glow.

Visiting Priene isn’t just about increasing your depth of knowledge of the ancient world, and it shouldn’t be about ticking off yet another ancient city (Tuesday, Temple of Apollo, tick. Wednesday, Ephesus, tick. Thursday, Troy, yawn, tick.) 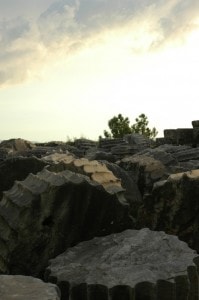 Where Ionic columns wait out the centuries

Priene is a place to fall in love with the romance of the ancient world. With its dramatic backdrop of Mount Mycale, the cloud streamers on its summit changing colour in the light, with its cool pine forests and graceful antiquity Priene makes us love history and that’s essential.

So go in the quiet season, take a picnic, take your time, touch the columns, trace the carvings on the fallen stones with your fingers, dream as you watch the light change on the marble columns and fall in love a little. 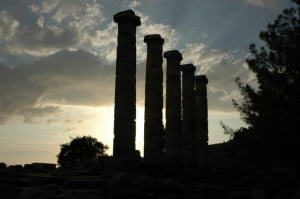