Earthquakes are like contractions, the first time you feel one you wonder did you imagine it. It’s not like in the movies where, in the case of childbirth, women are writhing and screaming and spilling secrets under anaesthetic and in the case of earthquakes, buildings implode in a cyclone of dust and debris and a bloke with a California smile turns up in a black four wheel drive to save you.

In real life the first earthquake you feel will leave you wondering if the neighbour has just dropped off a trailer load of logs next door. They tend to be minor jolts or rumbles and most of them feel like a heavy lorry driving past. This week the faults that meander across our part of the Aegean like the lines on your palm got a little more vigorous and so far we’ve now had four days of regular shakes, the biggest being a 4.9 on Thursday night which left nobody wondering if they had imagined it.

Turkey is an earthquake zone. If you own property here and don’t know this then being hit on the head by flying debris isn’t going to do much damage, and if you holiday here and don’t know it then you’re like those people who go to the Caribbean in August and complain to Thomas Cook when a hurricane blows in.

We were in Sogucak on Thursday evening enjoying dinner with my friend David when the quakes started. The first one interrupted the main course by rattling the china and let us all drag out our earthquake stories for consideration, the second made us laugh, the third, half an hour later, shook the house to it’s foundations and sent the two Turks present scrambling over furniture and fighting each other to get through the door to the terrace. David, Nick and I sat still and silent through the 11 seconds of shaking being terribly British and waiting to see if we needed to abandon dignity and bolt under the table.

There is nothing like an earthquake to wind up an evening and we left shortly afterwards leaving David muttering about how that was the worst he had felt in the eleven years he had been here and soothing himself with a little more justified gin.

We took the country road home from Sogucak to Kirazli; it’s a new road through the mountains, a lonely road passing through uninhabited areas. We could see the lights were still on in Kusadasi so it didn’t look like Aydem had shut down the power grid, but winding down the hills into Kirazli we realised the village was all in darkness.

At the entrance to the village a bonfire burned and people huddled around the flickering flames. Everyone was out on the streets and we drove carefully, wary of small children in the dark, the white light of LED torches was sharp and bright against the orange flicker of fires lit in the streets to keep the frights of the night at bay. We tried several routes to the house but all were blocked by villagers huddled in groups around fires so eventually we abandoned the car in the village square and walked the hundred yards to the house.

In the dark I groped for the torch inside the kitchen door and whilst Nick reassured a shivering Vinnie I checked everything over by torchlight. Check kitchen, no smell of gas, no hiss, no drip of water. Go outside, check pool, no cracks, no drop in level, pool chamber dry. Check all over the house, check for cracks, check for slippage, check the roofline, check the beams where they anchor into the walls, check it all. Look for dust, look for water, look for change.

I don’t want to sound overly dramatic about this, checking the house over was more than common sense, it was a personal thing for me. I built this house and four years later this was its first earthquake test. As with everything we hope for the best and prepare for the worst and if you live here you need to think about quakes so before we ever started building we had planned and planned. We spent a long time studying earthquake structures, learning as much as we could about how houses react to quakes. There was lots of discussion with our team over the right way to pour the concrete and construct the frame inside the stone walls, and all the theory comes down to this and so I really wanted to see what happened.

Nothing had happened, other than a bottle of perfume which had slid off the shelf into the bath and one picture lopsided on the wall. The village had been closer to the epicentre of the quake than where we had been in Sogucak and clearly it had felt it more as the power was out, the villagers were really scared and from what we could see of the streets by the light of the car headlights there were some smashed tiles and small debris.

This was a little quake, only a 4.9, but it was shallow and it was noisy and it went on for a while and so the villagers are very scared. They are raised on horror stories of quakes that strike in the night, of collapsed houses and whole families lost beneath the rubble and the memory of a country in mourning after the Izmit quake in 1999 is a fresh story to reinforce the fear. Everyone knows someone who was there.

But this isn’t Izmit, the fault line is totally different, the geology is different and at least here in the village the environment is different – no tower blocks, no apartment buildings. But even here rushing outside in the event of an earthquake is one of the worst things you can do. More people are killed or injured by falling debris, downed power lines and falling whilst running than are killed from being buried in rubble.

Eventually the power came back on; reduced power at first, just enough to give us light and then an hour later full power was back. It was long gone midnight when I went to bed, and as I arranged my usual nest of assorted duvets and pillows I pushed the bedside table further over so if necessary and the earth shook again in the night I could roll out of bed in my cocoon!

The next morning everyone was bleary eyed and tired. Most of the villagers spent the night on the streets, wrapped in blankets and sitting in plastic chairs around their fires, nursing small children on their laps, waiting for the reassurance that comes with dawn. In the light of dawn they inspected their houses and finding all well crept back in.

Early Friday morning Nick went to get bread and fresh smits from the village shop; there he found Tunc, the laconic owner, supervising the shop boys in earthquake preparedness should we get any aftershocks. Mainly this involved tying up the raki so it didn’t fall off the open shelves! Got to get your priorities right, you really need raki after an earthquake no matter how small.

Update – It is now Sunday and the little quakes go on, the picture below shows the last week’s worth of shakes in this area, you can see a live and constantly updated version by clicking here – http://www.koeri.boun.edu.tr/sismo/ 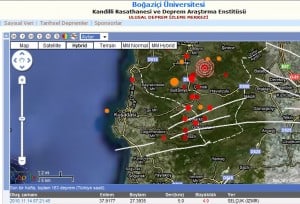 Most are 3 or below on the Richter Scale and are little jolts but this morning there was another 4 which built up from a deep down rumble to a sustained shaking. Hitting at 7am it was loud and again sent the neighbours fleeing into the streets with wild bed hair and clad in lurid lilac pyjamas. Scarier than the earthquake!

Quakes are a fact of life here, like hurricanes are in the Caribbean and gale force winds in Pembrokeshire and flash floods in Cornwall and tornados in Oklahoma. Whilst we had a little earthquake here back in Wales 90 mph gales battered my other home. This world will throw all sorts of stuff at us; it’s got a huge arsenal of weapons to threaten humanity. Best we can do is be prepared…and don’t panic….and possibly, safeguard the raki.