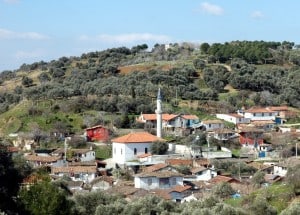 The village in Spring

I’ve been wanting to write this for ages, about a year actually, because a year ago a bit of me that had been off in a corner crying since Phil died stopped sobbing and trailing streamers of snot, pulled itself together as much as is ever going to be possible and thought “It doesn’t end here!” and started to imagine again.

I write (purple prose), I cook (will create a meal from nothing much), I show people Turkey (the real bit, not the boom boom, “hey lady you Pamela Anderson’s sister?” bit), but more than anything I build homes. I make the pictures in my head real by building them. From Pembrokeshire to the Mexican Caribbean to the valley of Kirazli I have taken seemingly unpromising bits of real estate and made them shine.

I love it, all of it, the dreaming in the beginning, the planning where you press though the fog to form the project, the dirt and the complicated juggling of the building of the thing and then the fact of the finished building when it is all over. I give birth to buildings where other women give birth to babies; it’s a very similar thing, apart from the weight, all the hard work makes me thinner!

Anyway, about a year ago that building things bit of me woke up and the old addictions started looking for a fix and we decided to look, casually, for a new project.

The reviews were good, the bookings started stacking up and it was obvious that there was a significant gap in the market here, for small character properties that weren’t hotels and weren’t resorts, that were home stays in Turkey, letting independent travelers see life here but still be really comfortable.

The beautiful foothills of the Menderes Massif in Autumn

We talked it over with guests who had become friends and checked that we weren’t being totally bonkers about our perception of the tourism business in Turkey and they contributed lots of great input and confirmed what we were thinking – for single travelers, women and couples who have grown out of backpacker lodges but who aren’t yet ready to totally trade their towel (Hitchhikers of the Galaxy geek reference) for an AI wristband and who want to relax somewhere authentic and real and never have someone try to flog them a carpet accommodation choices can be thin on the ground. 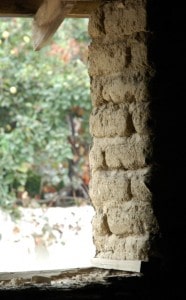 We ended up finding a house we liked in that village I wrote about in the blog post. A cute little cottage on 800 square metres of land, small but with potential to grow and add further units on the land and we went down the buying road and agreed a price and we were on the way to the village to meet the mapping engineers and map the land when the owners pulled out.

It happens, it’s normal, it’s just part of the whole buying in a Turkish village thing, and you just grit your teeth a bit and go back to the beginning and start all over again. But as we were on our way to the village anyway we decided to carry on and look at one of the other buildings we had viewed there previously, it was a very large house, and we had loved it but decided it was too big for what we had in mind at the time. 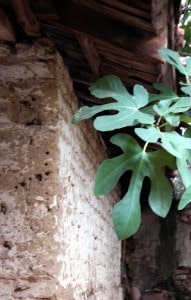 The building is sprawling; it’s on multiple levels, it has charming original features we can keep, it has a large private courtyard and beautiful mature fig tree. It’s position within the village gives access to extensive and stable infrastructure, it has good access, the boring necessity of brilliant road links and it’s right on the edge of the playground of the Aegean, perched between mountain and sea.

It’s a stone, old fired brick and adobe building – adobe is a wonderful material to build in and it ticks all the right boxes in my attitude to houses, it produces something that really belongs to its landscape, it’s traditional, it’s about as natural as it gets and it’s a fantastic natural insulator. A building like that takes me further down the road I have been traveling for the last decade or so, more sustainable, more in keeping, more natural every time.

So we viewed the house again, clambering all over it and getting happily dirty. The elderly owner gamely doddered from the tea shop and again hopefully offered up his much creased tapu and map. I photographed everything in sight from every angle, just in case, but I felt, with a heavy heart, that this was just too big a project. It was bigger than the last boutique tourism project we had built in Kirazli back in 2006, I could see it working as an off-plan project for someone wanting to relocate to Turkey but the world has changed between then and now and I didn’t know if people even considered that kind of thing now. Reluctantly, again, I said “No” to the property and we went home and the ancient owner went back to the tea shop.

Lake near the project

And then Nick started nagging me. He doesn’t nag much – apart from about things like dyson vacuum cleaners and garages and motorbikes – but this time he really nagged, he wanted this project, he thought it had legs, so to keep him quiet and because knowledge is never wasted, I did my homework.

I read the advance development plan for the area, I checked out the geology, I ran “what if’s” on spreadsheets and put myself under serious brain strain researching the history, methodology and recent breakthroughs in building in adobe. Every practical objection I could think of was overturned in the research.

Yet still I dithered, mainly I think because I was scared, not of the project, the more I learnt the more it made sense to me, but because people don’t seem to love property any more and I thought people would laugh at me if I said I was doing another off-plan (dirty word!) development and I’m more fragile than I used to be about stuff like that.

A month or so later, when we were out exploring the area we drove past the house and the huge original 16 foot front doors were off and I felt a stab of pain, someone must have bought it, it would be knocked down and some hideous concrete bunker built on the land.

Fifteen minutes up the road I made my mind up, I couldn’t let it go. We pulled over at the side of the road up above Aydin, parked up overlooking the sweep of hills down to the Menderes plain and we phoned the emlak who said the house hadn’t been sold. So we went back to the village and found the ancient owner in the tea shop and we went to his garden and negotiated over tea and fruit and we bought it. Just like that. 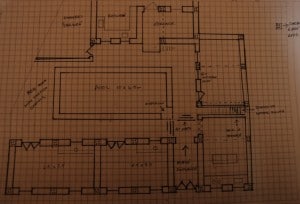 Well not really just like that, it took six months between checking all the legal stuff, negotiating the new laws, wading through bureaucracy and the snail slow speed of communication with someone who is nearly 90 years old, only reads Arabic Turkish and who doesn’t own a mobile phone and is scared the foreigners are going to rip him off (novelty!).

But eventually it all got done and this week I became the official owner of yet another wreck and I’ve already had six months to draft out the plans and the costings and source the really innovative stuff this project needs.

It’s an October morning in Turkey, the sky is that beautiful rich saturated blue of Autumn, a few high clouds are floating overhead wondering if it’s worth clubbing together to try and generate a rain shower. It seems unlikely they will bother; the day is warm, the sunlight less harsh than high summer but it still heats the roses enough to make their scent waft across to where I am sitting with my back against an old brick column, with my sketchbook on my lap, looking at an overgrown courtyard, looking at old walls and weathered terracotta roofs, looking at a twisted fig tree, looking with my eyes half closed, dreaming the details into existence.

Ladies and Gentlemen, let’s take it from the top and do it all again, once more, with feeling:- 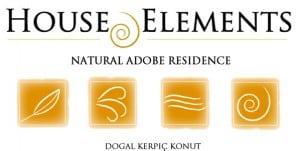 We are proud to present House Elements, a natural adobe residence which will produce four rental apartments and a two bedroom owner’s house built around a courtyard pool and garden.

If you want to move to Turkey and you’re too young to just sit in the sun and get wrinkly and you’re too sane to bung your cash in the bank and watch the interest rate go down and you’re passionate about showing people this great, big, amazing, infinitely varied, country then come talk to me, I think I have something for you!