Ever since I had a chap visit and sneer at my neighbours for being “poor and backward” I have had performance anxiety on behalf of the village. To be fair it turned out that the man was recovering (badly) from a brain injury and apart from being mad as a box of frogs he had zero impulse control and an empathy bypass, but I still worry that my purple tinted prose may have given visitors an unfairly rosy picture of the place. After all this isn’t Disneyland and not everyone sees the things I see and sometimes goats smell and not all old people are as photogenic as the ones they place strategically around Sirince to charm the tourists.

I worried more than usual when it came to entertaining two metropolitan urbanites from the Bodrum peninsula. Jack, writer of Perking the Pansies blog, and his partner Liam, were coming to stay and the closest these guys ever got to the countryside was knowing someone who once ordered an organic veg box from Ocado and their major concern was would Clarins cope with the free radicals in Kirazli’s country air. So I was seriously worried that my little village would be a bit too real for them, especially in January, when it’s frosty and at its least pretty.

I needn’t have worried, from the moment they rolled up in a glossy black car and swarmed out full of enthusiasm and interest they were a joy to host. First there was Jack with his bright enquiring eyes, Loki personality and intense interest in all around him. And then there was Liam, with his quiet intelligence, strength and stability radiating from him, but enough of the poet behind the eyes to make him terribly romantic. Thankfully they gave every impression of enjoyment during their weekend in the real Turkey.

Okay, my house isn’t real Turkey in the sense of enduring it whilst viewing it, the bed sheets are Ralph Lauren, the showers are German rainburst and the menu is a little more varied than kofte from the village takeaway (brilliant kofte by the way!). This is, in all honesty, Real Turkey Lite – all the ambience, less of a hardship. It is real enough to be interesting, but not so real as to induce cultural meltdown and a stern letter to the United Nations.

Liam was dragged out on dog walking expeditions and exposed to some of our favourite views, Jack politely advised he didn’t do walking and stayed in and admired the heat from the soba.

We took them olive picking and Liam enthusiastically wielded his cane, imagined some people who needed a good spanking, beat the tree soundly and the olives rained down. His prowess thoroughly excited Jack.

We took them to Kusadasi, just to prove it wasn’t Altinkum, and they happily settled into drinks at the Marina in an atmosphere of cool jazz and soft footed staff and admired the sun setting behind the masts of the yachts. It was all very civilised. And the coffee came with a little Italian biscuit.

We exposed them to our friends and they didn’t run away and there were no fights, always a plus.

They were, in short, the perfect guests, they brought tons of booze, mucked in, admired our dogs (even the smelly one), made their own bed, ate everything put in front of them, were funny and charming and clever and genuine. Even Evils the cat approved and unusually for him climbed on Liam’s lap and settled in for the long haul – normally he just randomly attacks people.

On Sunday morning they insisted on taking us for breakfast and as we left the house Liam asked, “Which car are we taking?”

“We’re walking” I said, “its not far.” Jack winced noticeably but gamely girded his loins and politely prepared to trek to brekkie.

A three minute walk down the road took us to the Koy Sofrasi with its usual Sunday horde of Mercedes and BMW’s parked outside. Inside, in the steamy heat, well to do Turkish families were going about the leisurely business of Sunday brunch, reading the Sunday papers, discussing the news and steadily working their way through the rainbow of preserves, jams, salads and cheeses that make up a traditional Turkish breakfast. I nodded to a couple of lawyers I recognised and smiled at the jolly owner stationed behind the cash register and the ladies in the open kitchen and we took our seats next to the soba so I could practice for the menopause – god it was hot!

“None of this was what I was expecting.” said Liam, just to prove that what I write isn’t complete flannel. “I could get used to this!”

“No, not yet” said Liam, clearly taken with a day dream of a rural retirement, “But one day, when we decide to settle down permanently.”

After a leisurely breakfast, more chatter and life story swopping they said their goodbyes with much hugging and kissing and promises to return in the Spring to see the valley at it’s prettiest when the blossom turns the orchards to white and pink clouds and poppies bloom between the olive trees.

“The only problem with living here” said Liam through the open car window as they prepared to depart, “I’d have to learn how to reverse the car and I haven’t got a clue!” and with that they disappeared, slowly, down the narrow streets of the koy, the sound of Kylie on the stereo vanishing into the distance. A little bit of glamour heading back to their natural environment. 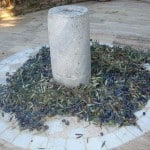 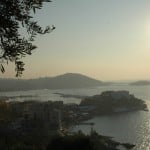 A very civilised Kusadasi on a January Afternoon 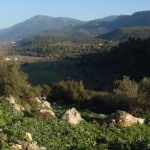 Sunset behind Kusadasi Marina in January