Posted in A Turkish Yearbook, Reviews and recommendations

Well Bayram is done, Ramazan is over, the tourist numbers have dropped and the true travellers are back for their explorations. September brought hot days, great glowing sunsets and cool nights awash with blazing stars and bright planets.

Now that the heat haze and dust of summer has cleared the views from the Belen Corban Sofrasi at the top of the mountain pass into Kirazli are sharp edged and richly coloured and the air is sweet with harvest scents.

Engineered into a plateau amidst the rocky outcrop on the top of the pass this Sofrasi has a dramatic sheer drop on one side and panoramic views of the coast, Kusadasi and Samos in front. I love it for Sunday breakfasts to the accompaniment of goat bells from the herd picking its way down the cliff, lazy lunches in the heat of summer under a cooling canopy of vines and early dinners in September for spectacular sunsets and star spotting. 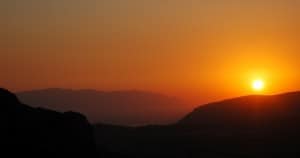 For those who don’t know a Sofrasi is a typically Turkish restaurant, normally a traditional restaurant in a rural location with a mix of normal tables for those of us who fall down stairs a lot and break our coccyx, and for the more flexible, floor seating booths with an eclectic mix of patterned cushions, heavy carpets and a low table to dine from. 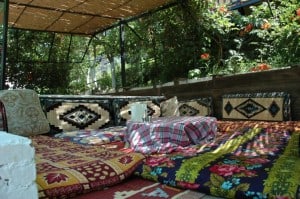 Sofrasi floor seating with a vibrant mix of cushions and carpets

Food is normally a selection of whatever the chef has cooked that day although a small written menu may be available. All the Sofrasi in Kirazli have kitchens run by women, really rather formidable and lovely women, women with big smiles, an easy competence in the kitchen, a love of feeding people and a grip of steel on the male serving staff who leap into action at the imperious wave of a ladle.

Along with a range of mezes there will be a few main courses, tender chicken wings barbequed in a light marinade, quickly cooked lamb chops, the ubiquitous kofte, and the main meal is normally served on a metal platter over a small burning brazier. If you are really, really lucky they will have made tandir kebab which is the softest, tastiest most melt in the mouth lamb you will ever have because here they cook it properly, for days! 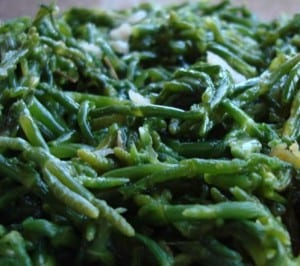 Enough about meat, what I really wanted to talk about was Samphire. Samphire, in Aegean Turkey, is normally a meze, one of the many small starter dishes you can enjoy before your main meal. Often overlooked amongst the flashier meze of vibrant roasted red peppers and glossy stuffed vine leaves these simple green stalks with their crunchy salt tang enhanced by oil and lemon are delicious.

I love samphire, but most people ignore it, which is a shame because apart from anything else it is a legitimate superfood and we should really be shovelling kilos of the stuff down ourselves.

It is absolutely packed with nutrients, Vitamin A, Vitamin C, Vitamin B2 (Riboflavin), Vitamin B15 (an energy booster), an organic form of Iodine, and minerals, especially iron, calcium, and magnesium. Samphire is a type of halophyte, a plant that thrives in salty conditions. Sometimes called sea asparagus, it is said to reduce cholesterol, control fungal and bacterial infections and boost your immune system.

When I first came to Turkey in 2005 samphire was terribly trendy in the UK, Hugh Fearnley Whittingstall was wittering on about it, River Café was serving it during its short UK season and His Royal Highness, The Prince of Wales was gently chiding us for not scurrying over to Norfolk and nabbing sack full’s of the stuff.

Samphire has been harvested for a thousand years, and here in Turkey it has been gathered from the sea cliffs and salt marshes between March and October for generation after generation. One of those age old foods it even gets a mention in King Lear, when the men who hang half way down cliffs to harvest it are used as an analogy for a King divorced from his Kingdom.

We’re coming to the end of the samphire season now, shortly fresh samphire will vanish from the meze tray, and you’ll next see it in the spring. Come March you may see children holding out handfuls of it as you drive past, they have gathered it from the salt marshes and are earning a few lira selling it to passing motorists.

Right now though you can still enjoy it, and I do, sitting in the Sofrasi, watching the sun go down in a flourish of gold and light filled Venus rising over Samos, eating samphire with fresh village bread, a drizzle of olive oil, a squeeze of lemon and a grating of mild garlic. Beautiful view, beautiful organic, sustainable, healthy food, beautiful moment in time.

On the left you can see Venus rising at sunset