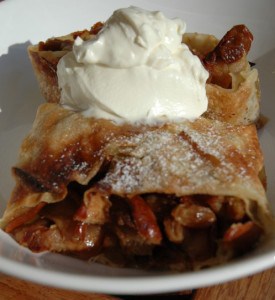 I was really impressed with the sun dried apples I bought at the farmer’s market in the village last Sunday, they smelt amazing. Opening the packet was like releasing every scent memory of apples you ever had. They had the intense smell of old cider presses, of farmhouse kitchens and the boxes of apples your granny stored under the bed in the autumn. So I really wanted a recipe that made the most of them and wasn’t just a breakfast dish involving chopping them up and hiding them in muesli.

I found an apple strudel recipe and I played around with it to make it easier and used Turkish yufka bread instead of filo pastry. I really don’t like using filo pastry, it’s fiddly and fragile and time consuming and I am notoriously lazy – my mother said the only reason I breast fed my daughter was because I was too lazy to sterilise bottles! – The yufka really worked and went lovely and crispy, the filling isn’t too sweet and you still get the great taste of apples but with a little lift from the cheese.

1 round of yufka bread – these are the big sheets of wafer thin bread that look like tablecloths. You can buy them in packets in the supermarket or fresh from the weekly markets. They are basically wheat flour, water and salt and they are amazingly versatile. If you can’t get yufka then frozen filo pastry works the same but you’d need three sheets and you’d have to carefully butter each layer.

In a large saucepan put 500ml of natural apple juice and add the dried apples, dried fruit and cinnamon stick. 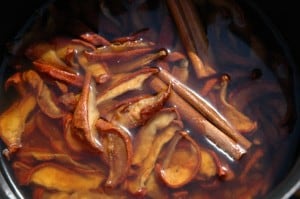 Bring to the boil and simmer for ten minutes then turn off and cover and allow to cool.

After an hour or so the apples and dried fruit will have absorbed most of the apple juice. Drain the fruit, chuck away the cinnamon stick and mix in the grated cheese. Have a little taste and add some brown sugar if necessary.

Turn the oven on to high and put a baking tray in it. Then on a work surface lay out a sheet of baking paper and put the sheet of yufka on top. Fold the edges of the round yufka in to form a rough rectangle, you don’t have to be too fussy about it and you want quite a big rectangle so you have room to manoeuvre. Brush the yufka with melted butter and scatter with brown sugar. Now take the soaked apples and place down the centre of the rectangle. 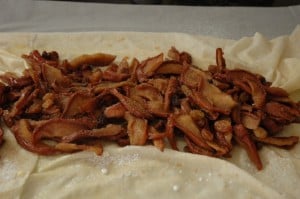 Brush yufka with butter and add the apple and cheese mixture

Fold the edges of the rectangle up to make a neat parcel, brush with melted butter to make it all stick together. 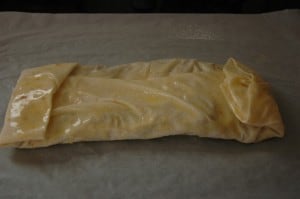 Fold up into a neatish parcel and brush with more butter

Roll the parcel of yufka over so the seam is on the bottom, brush the top with the remaining melted butter and scatter with brown sugar and then using a tea strainer sift icing sugar over the whole thing.

Turn to put fold underneath and sift with icing sugar

Take the hot baking tray from the oven and using the baking paper lift the whole thing on to it and bake in the hot oven for about 20 minutes or until it is golden and crunchy looking.

Apple and Cheese Strudel fresh from the oven

Serve with ice cream or cream – I use the little cartons of single cream which will go really thick if you open them and put them in the fridge for an hour or so.

The dried apples in the UK don’t have as intense a flavour as the Kupluce organic ones we have here. If anyone wants to use our sun dried apples and can’t get to the farmers market in Kirazli drop me an email and I’ll post some to you. 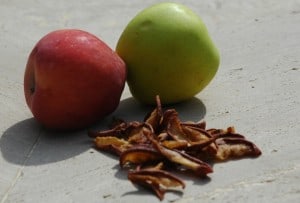