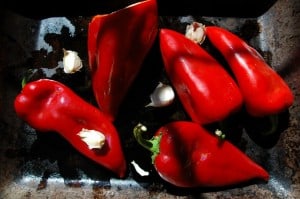 Now is the season of the pepper glut. The neighbour’s are slicing them and drying them on the flat roofs and I decided to roast some with garlic. They make a lovely meze or side dish and are best served at room temperature so the lashing of olive oil is easy to mop up with loads of village bread.

To roast peppers – chuck some peppers whole into a baking tray, drizzle with oil and scatter with unpeeled garlic cloves. Roast garlic is deliciously sweet and you squeeze the cloves when they are cooked to get the roasted flesh out. Pour over a generous amount of olive oil, give the tray a shake and put it in a very hot oven for ten minute – or, in my case, until the kitchen fills with smoke and sets of the smoke detector because I forgot about them! 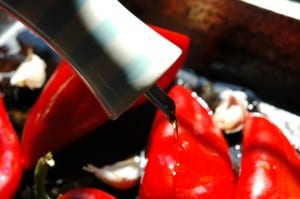 Not that it matters, you want them blackened. Allow to cool and then rub off the blackened skin and slice the flesh, discarding the inner core. Squeeze the roasted garlic cloves onto the peppers and rub in. Arrange in a shallow dish, add a good scattering of salt and then drown in more olive oil. 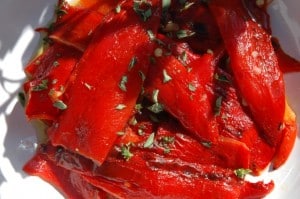 I snip a few of the small Turkish basil leaves over the dish just before serving for contrast and a delicate basil hint. This is such a pretty dish, easy to make and delicious to eat and it keeps for a few days in the fridge. 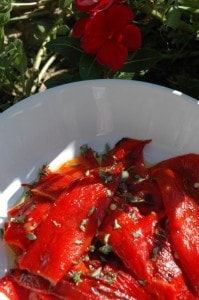 Serve drowning in olive oil with a scattering of Turkish basil

On a side note, there was a knock on my gate at 11pm last night and the neighbour launched into an elaborate and noisy pantomime of what she wanted. She kept repeating what sounded like “merdiven” but it was hard to tell as village turkish mangles language. Merdiven means stairs so I thought she wanted to go upstairs! Turns out she actually wanted to borrow my ladder to get her peppers onto the roof as she had just finished slicing them. I own the only real ladder in the village and so at 11pm at night we’re humping a triple ladder into her courtyard and she is shinning up it in the dark. It all turned out to be a waste of time actually because it rained this morning and she had to borrow the ladder again to get them down and dry them off again! 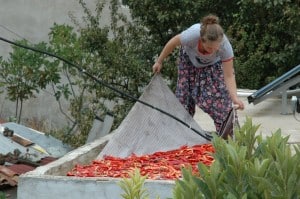 The neighbours daughter rescuing peppers after the rain shower