“How was the season for you?” I ask Bora, a friend in Kusadasi.

“You’re the first person apart from me I’ve heard say that!” I tell him, because basically, this October, most people I speak to in the restaurants and shops have been moaning about how bad a season it has been.

“Ahh” says Bora, “If you spend 2 million lira over the winter on credit and only make 1 million lira during the season then for you it will have been a bad season. But like I say, for me it was very nice!”

I guess it’s true, it’s an expectation thing and a need thing and a balance thing and those in the tourist trade, like farmers, are fond of a pessimistic approach. Like Bora we too in Kirazli had a nice season. Despite having our first insane guest (don’t ask, it was horrible but it had to happen one day!) we had a lovely season and the studio was booked from March through until end of October and the people were fun and interesting and stopped Nick and I from being isolated but reminded us why we stay here because “outside” sounds really weird!

However, Bora works in car hire and we, in renting out the studio, appeal to independent travellers and perhaps it is just this section of the market that feels good. Those whose livelihood has been hit by the all inclusive hotels (restaurants) and tourists who won’t spend a lot on gifts and souvenirs (shops) due to the recession in their home countries are clearly having a harder time of it.

I’ve stopped trying to find a pattern in the tourist season. Last year we had mainly Canadians and Australians passing through and we were busiest in the shoulder seasons of spring and autumn, this year has been mainly American and Indian guests and high summer was packed. The only commonality I see is that independent travel to Turkey remains strong and the timeless fascination of the ruins at Ephesus and the broad appeal and beauty of the Aegean region routes the independent and footloose through here as they tour this great big fascinating country in easy stages.

Now the season is winding down and the beautiful peaceful days of Autumn are here and the laundry is less and the countryside is still inviting and the sea is still warm and you can hear a collective sigh issuing from the expats and residents of the main resorts as they quietly reclaim their home territory.

This is my favourite time of year, I have more time and I have more inclination to get out and about because it’s so perfect even I can’t stay inside. The light is just wonderful and so I photograph everything because is all looks so good. This is the time of leisurely breakfasts in the mountains, long warm days on the sea and the pleasant cool of autumn nights where I sleep with the windows wide open and the stars burn with a particular ferocity. It is also the time of harvest gifts from the neighbours, daily deliveries of different varieties of grapes and every rooftop in the village is patterned with bright squares of peppers, grapes and figs drying in the sun.

By the way, please don’t think that this area shuts down at the end of October, 68,000 people live in Kusadasi alone without counting Selcuk, Soke, Aydin and the few million souls in Izmir, we’re not exactly into feral foraging for food once the charter flights from the UK stop! All the best restaurants stay open and even out here in Kirazli valley the sofrasi are open every day, they may close early of an evening if nobody turns up but in the towns normal service continues amongst all but the very specifically tourist haunts. Even my favourite fish and chip shop is open on market days in Kusadasi, Wednesday and Friday 🙂 All the main attractions like Ephesus are open all day every day so whilst the main tourist season has passed the best of the year is yet to come. 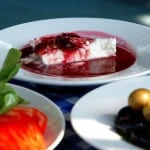 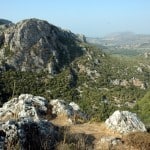 Looking down on the coast from Kirazli 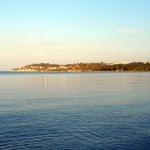 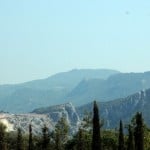 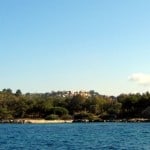 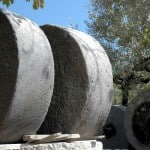 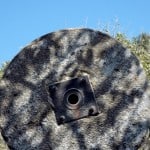 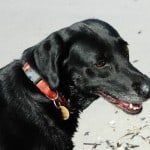 Shadow reclaims the beaches now the tourists are gone