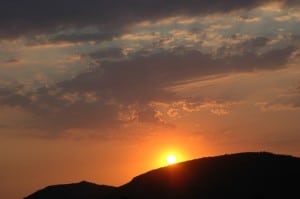 Sunset during Ramazan, when the village wakes up

Ramazan is rushing to an end, Şeker Bayram is only a few days away and here in Kirazli the short nights are busy as everyone hurries to get their homes ready for the inevitable influx of family visitors whilst enduring the ongoing strain of keeping Oruç, the fast, during this horribly hot August.

It’s like Christmas at home, the house must be perfect by the big day, and whilst in the UK husbands might be bullied into DFS to cough for a new sofa in time for Christmas delivery here, the determined housewife, will hold out for a whole new storey on the house.

Around the village home improvements are being rushed to completion. The neighbours down from me are concreting their courtyard and lime washing their walls and the husband and son were irritably mixing cement at 10pm the other night being sniggered at by less henpecked husbands.

Across the village long planned second stories are being grafted onto roof terraces, the stubby ends of the first floor metal earthquake frames that rise through the concrete are mated with new rebar columns, shuttered with scabby bits of left over wood and concrete poured to build the skeleton. Rapidly infilled with fragile tugla blocks the buildings are quickly done and swiftly rendered, ready for the all important season of hospitality that kicks off Şeker Bayram at the end of Ramazan.

The normal day to day tasks of a farming community must still be done though as we are in the middle of the pear and fig harvest. Work in the orchards is done in the cool of very early morning when the dawn mist wreathes the orchards or late at night under the waning Ramazan moon. Tractors are still rumbling through the streets at midnight, bringing in the harvest in the blessed cool.

Last night my closest neighbour was constructing a new ladder in the dark. He does this several times year, normally at cherry harvest and fig harvest time and he insists on doing it in the middle of the night. This isn’t some weird tradition I think he just forgets he has an outside light and so tends to grope around by moonlight and mosque light nailing together the long bark clad branches that form orchard ladders here.

Whilst the nights are buzzing and busy everyone tries to sleep during at least part of the day, leaving the village silent apart from the rasping of the crickets and the lulling rush of the hot wind through the pines. They sleep not just because it’s hot but also to pass the worst hours of fasting, when going without water is most difficult in the heavy heat of the afternoon. My neighbours are all keeping the fast and this year they are incredibly proud of themselves, and rightly so, because it has been hard in the terrible heat of high summer.

The mains water was off in the village the other day and all the ladies came to my house in the late afternoon to fill their cauldrons and kettles with water to cook the iftar meal as I’m closer than the village well. I offered them showers as well as they were hot and dusty but they all politely refused as whilst they can wash they cannot shower in case the water goes on their lips and they accidently swallow it.

They are beautiful in their dedication, it gives them a certain calm and a serenity and they enjoy this month long exercise in devotion. The first days are always hard but then they get into it and the shared discipline is yet another thing that welds them closer together as a community.

Neighbour’s husband is less serene; he was grumpily offloading hay from a tractor for their fleabitten grey horse the other afternoon. “Horse gets food,” he complained at me, “I keep Oruç!”

I did feel sorry for him, but when I saw him later, leaning on his terrace wall, drinking in the view of the mountain, drawing in deeply the smoke from his first post sunset cigarette he was back to his usual self, glowing with righteous pride and eagerly looking forward to the reward of a sumptuous Iftar meal.