On 18th May Turkey ratified a new law (Law No 6302: The Law amending the Law on Land Survey) which impacted on a couple of previous laws including the law that describes who, what, where and how foreigners can buy real estate in Turkey. It was a relatively small piece of legislation with only four real articles and two administrative articles and as is normal in these cases a time scale for when the articles come into force was included in the final paragraphs of the new law. One article was to be implemented in three months time but the other three came into force immediately which was a bit of an oops really because the new systems referred to in those articles weren’t actually in existence.

So basically Turkey did away with one system and by virtue of the wishy washy nature of the new legislation failed to implement a replacement in time, effectively leaving officials on the ground without a process to follow when it comes to dealing with foreign land purchases and leaving foreign buyers high and dry. The only thing they could do was suspend the buying of real estate by foreign nationals until things got clarified.

This new law rewrites Article 35 of the Land Registry Law. Article 35 previously, quite clearly, stated nationals of which nations could buy real estate in Turkey and how much they could buy and where. The new version of Article 35 is a lot less clear although it aims to be wider in scope. Theoretically it opens up the law to allow foreigners of any nation to buy real estate here, but then it gets all wimpy and says but actually we’re going to draw up a list of approved countries and that’s the responsibility of the Council of Ministers – oh and sorry they haven’t done it yet!

Which is why the system has ground to a halt. Right now, in practice nobody knows for sure which countries are and are not on the list of approved countries because the list doesn’t exist yet.

Incidentally, that Article, the one that’s been implemented immediately, also, in theory, does away with the need for foreigners to apply for Military Clearance but it gives the army a year to provide the maps that will allow this to happen!

In the mean time the Land Registry offices cannot accept applications from foreigners to purchase land and everybody must sit and wait patiently until the Council of Ministers meets and get’s that list drawn up. After that we’ll have to wait for the Aegean Army crank up the photocopier and reluctantly get the maps printed and sent out before military clearance can cease. Yavas yavas.

It’s all a bit ironic really, since the new law was debated and passed in Parliament on 3rd May I have received about 100 gushing email press releases from super excited real estate companies telling me how Turkish property will rise in value and how nationals of any country can now buy here – and then Turkey closes the system down.

Everything now depends on the Council of Ministers debating and then publishing a list of countries whose nationals they will allow to buy real estate here. Hopefully they’ll get round to it soon, before they slope off for the long summer break and delay the whole thing until the Autumn, which was what happened last time. And when they finally do get around to writing up that list I can expect another 100 excited emails from excited real estate agents spamming the hell out of my inbox. 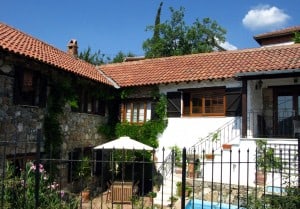 House for sale in Kirazli

Since this article was written things have settled down and cleared a little (dependent on where you are in Turkey obviously, because that’s what it is like here) and if you are interested in moving here and in owning an income generating property in a village in Turkey please see our house for sale at Kirazli Village House for sale

This rare stone villa is an established and lovingly maintained home having been lived in year round for seven years. Whilst suited to a multitude of uses including home with art gallery, day spa or yoga studio attached the house currently generates exceptional income over a 10 month season purely by renting out the studio wing to independent travellers exploring the region.