It’s that time of year again, early April, and in their shallow mountain burrows the tortoises are stirring from their hibernation as the earth warms and the sap, so to speak, rises.

Here in Kirazli the rare Hittite Tortoise is still farmed by the villagers. Originally domesticated nearly four thousand years ago by the Hittites in their underground cities Kirazli is one of the few places where this endangered species of tortoise still thrives. Having spent the winter in burrows dug amongst the pine trees in the remote glades of Gul Dar in early April, when the first green almonds are on the trees, they are roused from their slumber by the village children, who poke the burrows with sticks of cherry blossom to encourage them out.

Once out of hibernation the tortoises are herded to the village for their annual shearing before being released into the green fields of the valley where they do what comes naturally to tortoises at this time of year and mate. Come late September they will be rounded up again and returned to the high pastures where they will grow their winter coat and seek their burrows again. 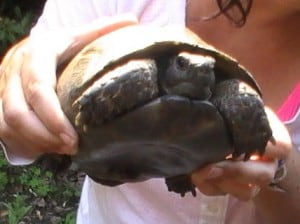 I found this little fellow by the side of road out of the village just after the shearing last year, he hissed irritably as I picked him up – tortoises are very grumpy! He still had a few strands of hair on the back of his shell which the shearers had missed; they were impossibly silky, almost glittering in the sunlight.

Tortoise hair is highly prized by the villagers, and being finer than frog fur it is traditionally used in the crocheting of wedding veils and delicate rugs. Ranging in colour from a rich deep auburn to pure bright ginger tortoise hair is hand sheared from the carapace by the men of the village then passed to the ladies who wash, card and then spin the hair for crocheting over the summer. 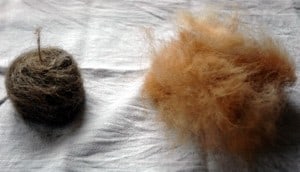 Tortoise hair - unwashed on the left, washed and ready for carding on the right

The finest hair from the youngest tortoises is used for small rugs and carpets and these become heirloom pieces, handed down from generation to generation. When I visited Capadoccia a couple of years ago there was a particularly fine example of a tortoise hair rug in the hotel I stayed at, The Sacred House. Reputedly woven by the legendary weavers of Nisan Aptal it was one of the most treasured items in a hotel bursting with antiquities and it was kept in a glass case in the lobby. Occasionally tourists would try and buy it, “That would be like selling the pyramids or the Brooklyn bridge!” the horrified owner told me, “We just couldn’t do that.” 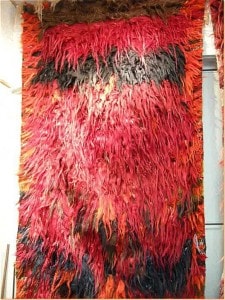 Personally I wouldn’t have wanted it, I thought it looked like someone had skinned an Irish Setter, but the Hittites apparently revered it, the redder the better being their motto! The tortoise that produced the hair for this rug was according to legend treated as a virtual god and the kilo or so of hair it produced annually could only be used by the daughters of Kings. As a result it is, quite naturally, priceless.

Back in Kirazli as I drew back my bedroom curtains this morning I could see the neighbour’s wife haranguing the husband as he sat on the patio step sharpening his shearing knife. The old curved blade is worn thin with decades of use, the characteristic notches in the blade to slide over the raised plates of the carapace identifying it as a tortoise shearing tool. The neighbour looked up and saw me and waved, “Kaplumba bugun!” she shouted excitedly, “Tortoise, today!” 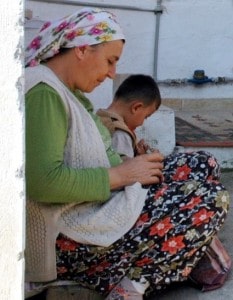 Soon the village children will be running through the streets waving their cherry blossom sticks excitedly and then soon after there will be the unique hissing, knocking, scratching sound of the tortoise herd stampeding into the village, filling the narrow streets wall to wall with their rippling waves of tossing hair as they rush to the short walled corral by the Muhtar’s office for the shearing.

I’d better go and find Evils and lock him up for the day, he won’t be able to resist throwing himself into the melee as it passes the house and I’d hate to have him trampled to death by the running of the tortoises. 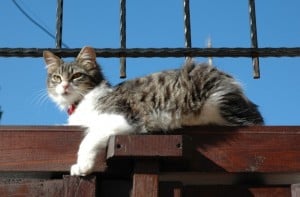