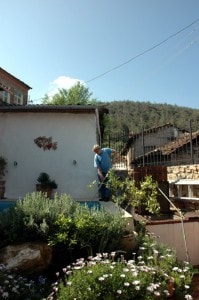 Nick cleaning the pool this morning

It’s all been a bit busy this week and I haven’t had time to blog or even comment on my favourite blogs, between guests getting rained on and house viewings and guest changeovers and lots of cooking it’s been unusually hectic. And now to top it off I’ve managed to damage my left eye whilst experimenting with a version of Kentucky Fried Chicken. Clearly the ghost of Colonel Saunders was having none of it and as I experimented with a blend of herbs and spices he scored a direct hit on my left eyeball with a high velocity piece of shrapnel (I think it was a lump of cumin) when the oil popped as I was frying the chicken. Nick, being practically half blind himself (it’s his age) couldn’t see anything in my eye although I could feel it and insisted there was nothing there and so I went to bed and woke up this morning with a gummy eye that feels like its been pritt sticked shut.

The weather this week has been pretty crap, unusually crap, with mainly cloudy days and some torrential downpours. You can’t help feeling sorry for your guests when it rains and when the guests we had at the early part of the week returned from a day out a Pammukale drenched and freezing you’ll do anything to cheer them up which is how I found myself looking up fillipino recipes at short notice.

April can be a bit iffy weather wise but this year it is particularly rotten right across the Med and even Spain had the Semana Santa celebrations rained off. Hopefully it will warm up quickly now as my beloved daughter arrives next week for a visit and if it rains I will be held personally responsible!

On the markets the first new potatoes have appeared and as small veg is scorned by the frugal Turkish housewife the tiny sweet waxy new potatoes are a bargain compared to their more well grown brothers. Nick picked up three kilos yesterday and they have all been used already, they taste amazing. It was however the only thing he bought at the market as he went to Kusadasi Friday market as he was in town early and horrified by the prices, which were twice that of Selcuk, he returned grumpy and said he would go to Selcuk today as he wasn’t paying 2.5tl for garlic and 35tl a kilo for minced beef! The savings at Selcuk will more than make up for the extra petrol. 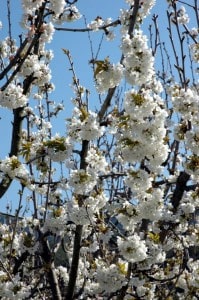 Despite the poor weather the seasons sweep onwards, the wisteria has finished flowering and is now just frantically growing, the first red rose is out and this morning I found the first pale bloom on the rambling yellow rose, hidden underneath, shyly peeping out.

Nick’s allegedly blue rose has produced a bud and is being scrutinised daily to see if it will indeed be blue, the jury is still out on that one and Nick is hedging his bets by insisting that he now can’t remember which one is supposed to be blue.

Today the sun is back, the sky is a rich royal blue and the rain is gone. The trees throughout the valley are weighed down with blossom, the poppies are blooming with abandon in the hedgerows, the guests are sleeping late, breakfast is ready and it looks like finally summer is on its way to Kirazli. Let the sun shine on, please God let the sun shine next on.