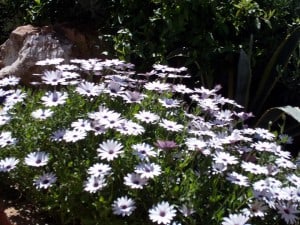 Spring flowers, they bloomed like this for six weeks

I got up early this morning and cut back the spring flowering plants that are just about past their best, giving the newly planted peppers and tomatoes room to grow. This is the first year I have planted anything more edible than a herb but when Sahin our farmer friend donated a few seedlings I thought I may as well give it a go.

Having virtuously weeded the garden I made banana bread, cooked the white beans I had put to soak last night and dressed them with oil and a ton of garlic and parsley, then I blanched the peas I podded whilst sitting by the pool yesterday and froze them for pea puree. I even found myself wondering if I could get a cherry pitter delivered from the UK in time for the cherry harvest but I think I have left it too late as it is imminent. Talk about domestic, I’ll be knitting my own saucepans next! 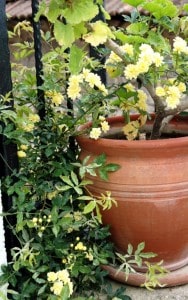 The creeper on the railings flowering

Of course all this domestic drive is because finally, a month late, the sun has come out, properly and we all feel energised. We had a rotten spring, by our standards, but yesterday, for the first time this year the thermometer in the courtyard crept over 30 degrees in the shade. The time was 30 degrees would have killed me; I’d be inside panting under an air conditioner, sweating freely and doing nothing but read. Now it takes 45 degrees to slow me down and 30 degrees feels about right.

I was just reading an article about the 1976 drought in the UK as it looks like conditions are right for a repeat performance this year. I remember that endless June, July and August when the sun shone every day, it defined the memories of childhood summers for all of us born in the 60’s. Michael Fish, who wrote the article, told of hot sticky afternoon where he selfishly commandeered the family paddling pool and day after day the temperature hit 26 degrees! I wear jeans, uggs and long sleeves in 26 degrees after a couple of years here. 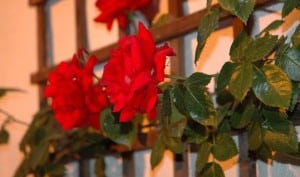 The red roses in the orange light of sunset

Out in the garden the red roses have bloomed dramatically and are now fading, they have such a short day in the sun, but the wild pink roses that I have planted around the place are about to bloom and their sweet clusters of flowers are something to look forward to as we move into summer.

The oleander (known as a camellia if anyone in authority asks!) is about to flower as well, growing well in its new roomy planter and filling out nicely. The lavender is about to bloom, which I love, and which I can’t wait for as I have a recipe for lavender lemonade that I’m waiting to try, apparently it goes pink when you add the flowers. 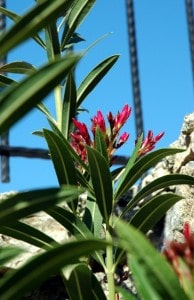 It's an oleander and I don't make tea from it!

Evil’s has taken to appearing only at meal times lately, being massively anti-social he loathes it when we have guests and we have had people here pretty much non stop since early April. He has made his displeasure known when he turns up for meals, yodelling loudly when he arrives and stalking around the place complaining. His visits have involved pausing only to bump heads with Shadow before grabbing a quick bowl of cat crunchies and then heading back out to lurk on the rooftops and make life miserable for small pretty things. As we have a few days off between guests he did condescend to hang around for a couple of hours yesterday just to make it totally clear that it is strangers he hates, he is prepared to tolerate us, we have control of the food box and the grooming comb. 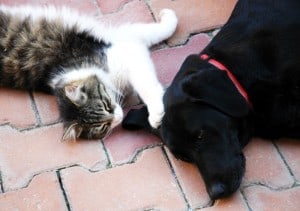 Bless you my child! Evil's bestows grace on Shadow