Full moon over the valley just before dawn

The last days of October were sunny and clear and Ahmet our weather wise farmer friend promises us that we should have two weeks of uninterrupted sunshine.

The ten days of on again off again rain and thunderstorms we had in mid October have washed the valley from the dust coated ochre of late summer to the bright tones of autumn, and on the mountain pass down to the coast the sun scorched grass looks as though it was repainted over night in a lush viridescent green.

The early mornings are full of pearly light as the last stars fade and dawn lights up the mist hanging in the valley. It really is a beautiful time of year.

Now the nights are suddenly cold it is time to close the doors to the courtyard. They have been open twenty four hours a day since late April. And this brings a new problem. Evils needs unfettered access to the outside. Whilst he is litter trained I am less keen on litter trays in the house as there is nothing more likely to make you feel uncomfortable than trying to avoid eye contact with a cat poised over a litter tray in your living space! Especially when you have visitors – timing is everything to a cat and Evils is an expert. So its time to install a cat flap and train Evils to use it. 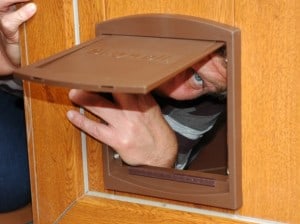 Demonstrating the cat flap to Evils

They don’t have cat flaps in Turkey, so Nick, a man who can find anything and get it shipped to Turkey, procured a cat flap in the UK and it duly arrived at the tea shop ten days later. Quickly fitted all that remained was to train Evils. He wasn’t happy about the idea! I rammed him back and forth a few times through the flap so he got the general idea and then ignored him to let him work it out himself. I didn’t get much sleep the first night as he regularly attacked me as I slept in revenge for being forced to open a door himself. 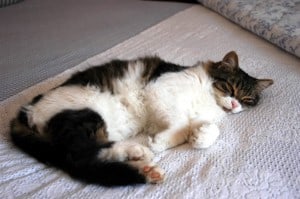 Evils, crashed out on the whitest thing he can find after the trauma of being rammed through the cat flap

I didn’t get much sleep the second night either as he had by then decided that actually the cat flap was quite fun and he spent the night crashing noisily back and forth through it. So I’m really tired but Evils isn’t as he enjoys twenty hours a day of sleep, preferably on something expensive, white, preferably by Laura Ashley and guaranteed to show every mark!

We are lucky enough here to have colour in our gardens all year round and right now the mini chrysanthemums are flowering in their pots. 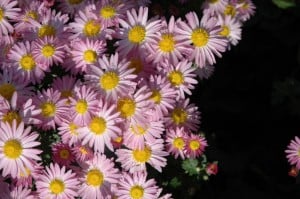 They don’t last long and even with religious deadheading they are past their best in a few weeks but they are beautiful at this time of year and I have yellow, bronze, vibrant pink and white ones. It is always a joy when they flower as I am a useless gardener really and it’s only because we have such a great climate that my garden looks the way it looks.

Although the house is for sale – and right now, two and half years after Phil’s passing I am finally really ready to sell because I know exactly what I want to do next – I still keep doing little jobs around the place. There isn’t really anything to do inside, the house is a joy and an ease to live in, so outside has to be the focus of keeping busy.

Some of the larger plants are getting pot bound and so new brick planters are the project of the moment. Nick has finally salvaged enough eski tugla (old hand made brick) to build at least two new planters and the first one is being built to the right of the pool chamber. We could have just popped down to one of the Yapi Markets (Builder’s Merchants) in town and bought a load of facsimile old brick but as the fake old bricks they sell are purely for decorative purposes they have all the structural integrity of a crumpet and would disintegrate to reddish brown slush in a couple of years. So, for us, it was worth trailing round the valley gradually collecting genuine old bricks. Apart from anything else the colour works better and I love reclaiming things.

In addition to being a new home for my lovely wild oleander, which has survived horrible tortures in too small a pot for the last couple of years, the new planter will give good depth of soil to a wisteria I want to train along the front railings. Wisteria’s do really well up here whilst bougainvillea really struggles, and I want something that will quickly ramble along the top of the wall. 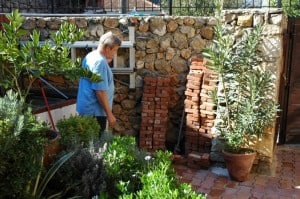 The rest of the planter will be given over to trailing plants for my signature messiness! I prefer to describe my planting as rambling, my mother calls it messy, but then she has always referred to my design philosophy as Sluts Decorating – two million candles, too many throws, no frames on my pictures and a skip load of pot pourri. Never mind, old brick and rambling plants are the way to go I feel, and the new planter will tie in with the rest of my flourishing, trailing, soft tones and wild foliage, courtyard garden.