I think Samos hates me, or Turkey loves me, but either way getting from Kusadasi to Greece has been fraught with natural mayhem these last few trips, with unseasonal storms, persistent gales and hump backed seas making the short crossing uncomfortable and unnecessarily dramatic.

We popped over to Samos on Tuesday to stock up on decent wine and succulent pork (ahhhh those scotch eggs in my immediate future!) and half way across the channel got hit by a monster squall that had the horrified tourists in vest tops and flip flops huddling under towels and watching in despair as green blue waves broke over the bow and sluiced enthusiastically from one end of the boat to another. I remembered I am a child of the Irish Sea and enjoyed the ride whilst quietly praying to Poseidon as we were in his jurisdiction. 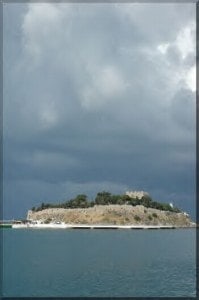 Samos was beautiful as ever with the pretty harbour of Vathi washed clean by the storms, and the view from our favourite little taverna up in the mountains at Vorliotis, looking down through ancient olive groves and flame like cypresses to an improbably blue sea, was staggering as ever.  The lunchtime sampler platter of fried aubergines, garlicky dips and spicy meatballs was as always fantastic.  I love Greek food!  Missed out on my fried haloumi this time though, was just too full. 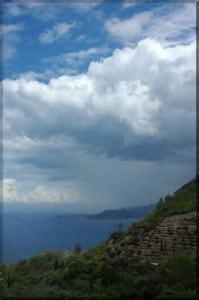 The weather this week has been totally bonkers, outrageous thunderstorms and torrential rain for two days gave us six inches we aren’t used to in May – (pause for Kenneth Williams impression!  That will be totally lost on my American friends!).  One storm on Sunday produced lightening so close it blew out my main trip switch twice and a thunderclap so loud it had a couple of male friends who happened to be out in it clutching each other manfully whilst standing ankle deep in rainwater, sure that their end had come.  One of the stranger sights to be found in the Aegean this week!  Wish I had film to post on YouTube.

Now the skies have cleared again, the temperature is rising and the banners have gone up announcing the annual Cherry Festival will be held this weekend, 30th May.  This is earlier than usual but apparently last year the cherry season was nearly over by the time the festival rolled round and the village nearly had the shame of importing cherries for their celebration.  A truly nightmare scenario.

So Sunday will be full of noise and bustle and traditional dancing, much pressing of the flesh by local dignitaries, camel sausages (inabun), mini doughnuts and hordes of visitors clogging up our narrow streets and being bossed around by Jandarme who don’t know where anyone should park anyway.  Still it is only one day and then we can all settle back into our luxurious, slow peace.

I welcome the slowness of pace here, I know what trials summer can bring and I know its time to change the daily schedule with the rising temperatures because slow means comfortable!  As I irritably pushed a hoover around this morning and sweated buckets I knew it was time to switch to early morning, late night working with only minimal movement between the hours of 10 am and 7pm.  It’s the difference between living here and holidaying here!  Whilst May is still glorious and beautifully, bearably hot we are heading into the sledgehammer heat of summer when tasks as simple as changing a bed require careful scheduling or you need six showers a day and an intravenous drip to hydrate you.   So you do anything that needs doing at dawn and dusk and plan nothing more strenuous than a snorkelling expedition during the day!

Got to go, a neighbour has just dropped off several kilos of just picked cherries, so it is time to gorge on the first cherries of the year, to sit cross legged on the warm marble by the pool, watch the blazing summer stars come out and enjoy the freshest, richest tasting, fruit you’ll ever find. 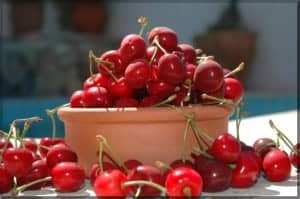