The valley in June, with the north wind keeping us cool

A cold front from the Black Sea is sweeping down over Turkey, the temperature has dropped and the wind from the North is cool and strong, swirling weirdly around the valley, gusting about the houses, sending the pine trees into their surf sound sway and rippling across the drying grasses on the top of the pass.

We went for breakfast at the Belen Coben Sofrasi yesterday morning, eating on the cliff edge with Samos in the distance and the high pitched cries of birds all around us. Then I caught the dolmus back to the village whilst Nick and our guest went hunting for the Aslani Cave at the far western end of the valley.

At the edges of Kirazli valley the well watered flat fertile lands rise up to rock and the flood of green turns to the ochre and olive of furze and scrub. Here the efforts of man are harder to maintain and the fields of vines get smaller and more irregular, holding a narrow foothold in the pockets and patches of rich soil found amongst the rocky roots of mountains.

The landscape changes from softly glowing, friendly fields to a wilderness of low lying thorn bushes highlighted by man sized thistles whose vivid purple heads, wide as dinner plates, host squadrons of fearsome Japanese hornets, their wicked long stings hanging down over the inch long thorns as they drink the nectar.

Up here, in a landscape peopled with curled snakes and strange growls in the undergrowth is the Aslani Cave, rarely visited and named for a lion shaped stalagmite on the floor of its main hall. A decade or so ago someone thought this cave could be explored and exploited as a tourist attraction but nothing came of the plans to run a road to it and build steps down into it and so despite the rumoured medicinal properties of the cold air inside, which some claim can alleviate rheumatism and asthma, the cave remains silent and unexplored and no wonder, as it is difficult to get to and by no means should be explored by novices.

The entrance is low, hidden in the hillside on the left of the track as it peters out on the edge of no mans land about 45 minutes hike up from the valley floor. The entrance is deep in leaf litter and it drops down into the dark a long way. Without ropes and helmets and head torches and a certain devil my care attitude it’s not an open invitation to explore. This is not a friendly cave!

Reportedly the cave is 110m long and 40m wide; after a steep climb down into it’s depths you follow a passageway for 40 metres along the fault and then the cave widens into a vault with stalactites and stalagmites and curtain formations. So we read, because without the right equipment the decision was wisely made to leave exploring it for another time, when it is cooler, and proper planning has been done in advance and probably a quad bike deployed to get there!

Nick and our guest eventually made it back to the house, badly scratched and bleeding a little but with no lasting damage and a strong respect for thorn bushes.

Even if one has been out manfully exploring the wilderness all day dogs still need to be walked and so at sunset we took the dogs along the eastern edge of the valley near the village. Here the land is gentler, prettier, bearing the marks of a long relationship with man in the form of old terraces, ancient stone walled wells and well established paths. Here the pine forests cloak the lower slopes of Gul Dar and the views out across the village towards the sunset and Samos beyond are softened by dark flame stands of cypress and small olive groves stand side by side with orchards of fig, shady under wide, fat fingered leaves. In the golden light of a slow sunset it was beautiful beyond belief, silent and peaceful, abundantly green and glowing in the rich light.

Quietly we walked the track and watched the tones of colour deepen over the valley, and whilst the dogs padded through the pine needles and snuffled through the orchards the sky changed from a vibrant tangerine to a pastel wash of lavender on the horizon and the first stars came out.

And this morning, still the north wind blows, the silver wind of summer, tossing the leaf cloaks of the orchards so their pale undersides flash silver in the sunlight. It is an uncanny wind, cool in the heat, strong in the swirl, sending the swifts spiralling high into the endless blue to ride the thin fast currents above the valley. It makes for a truly beautiful day. 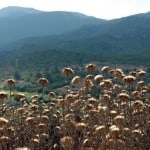 The valley in June, with the north wind keeping us cool 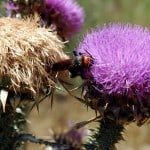 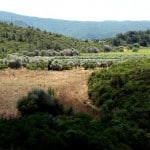 The drier and more rugged western edge of the valley 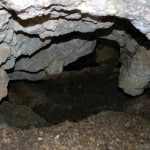 Entrance to the Aslani cave, Kirazli, deep in leaf litter 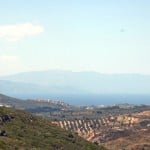 Kusadasi and Samos from near the entrance to Aslani cave 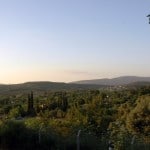 The softer, prettier, eastern end of the valley 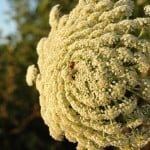 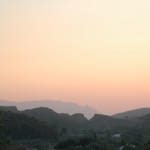 The pass into the valley and Samos beyond at Sunset