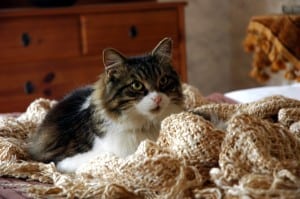 Evils in his usual winter position on my bed

All change for the season…….

The villagers change their houses radically for winter, some rooms are abandoned totally as furniture is heaved around (by the women), sobas are reassembled from their component parts which have been stored in the goat shed all summer (by the women), curtains are changed (guess who!) and layers of rugs are unrolled to cover cold floors and every draft is tracked down because everyone knows drafts cause your uterus to fall out! 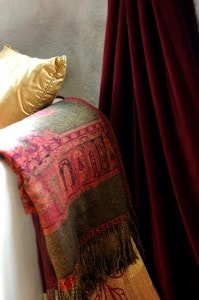 Village houses in winter become super snug, stuffy actually, and the combined body heat of the whole family in one room, the roaring soba and the constantly brewing tea means I break into a sweat within a minute of entering the neighbour’s house.  It’s something like 35 degrees in there and I find it horribly uncomfortable.

More than that every year there are sad stories of whole families falling asleep for ever in poorly ventilated rooms where a faulty soba flue has caused carbon dioxide to build up to fatal levels. If you want to be nice to your Turkish neighbours and get them a present then buy them a carbon monoxide detector! 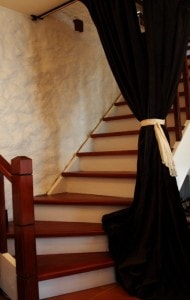 The stairs, screened off for winter

I don’t like a room to be too hot; I spend six months of the year trying to keep cool so the chilly evenings of winter aren’t too much of a problem for me.

I’ve spent most of my life without central heating and I adapt to the cold better than the heat. Nick and I nearly expired from heat exhaustion in my parent’s over heated house at Christmas.  That said I don’t want to spend the winter typing in gloves and muffled in four hundred layers of wool like a particularly sturdy matryoshka doll (there is a woman in here somewhere) so we make some changes to the house, but not many (thank you, thick stone walls!).

The fluttering voile and linen curtains of summer are swopped for heavy velvet curtains in winter and we close off the stair well so the rising heat doesn’t bugger off into the attic and keep the house sparrows toasty.  We draw the curtains as soon as the sun drops below the mountains so the low winter sun that has warmed the rooms all day isn’t lost and we swop the light cotton sheets and duvet covers of summer for heavier bedding and a couple of throws and that’s about it really. 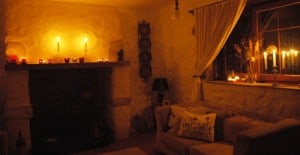 We have a soba but we rarely light it, it’s there for emergencies really, in case there is a major power outage on a really cold night and we have a good supply of candles for the sudden power cuts during the huge electrical storms that characterise the Aegean winter.  Normally though the minute I’ve lit all the candles the power comes back on and Nick insists I go around blowing them all out because he hates candles because he is the least romantic person on the planet!

So far (crosses fingers etc), this winter hasn’t been like last year.  Last year was the coldest winter in Turkey in living memory and the village wood piles struggled to keep up with the weeks of cold we experienced. This winter has been much more temperate, much more normal, and whilst we have had tremendous rain and extraordinary storms we haven’t had the cold yet other than a couple of frosts just after Christmas. 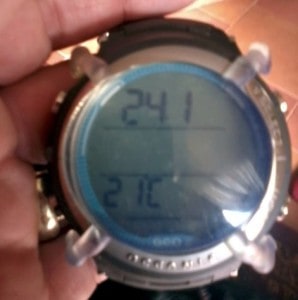 It’s a showery Thursday in late January, when the sun comes out it is uncomfortably hot on the back of my neck as I sit and type this.  If I check my diving watch, which is gathering dust on the table beside me, it shows the current temperature is 21c in the living room, and that’s without any heating on at all, that’s just from the sun through the windows.  It will get colder later but by then the oven will be on and a comfort food dinner will be on the cards.
Share: Twitter Facebook Google+