It’s all a bit embarrassing, talking about your life, your very, very normal life, we spend more time saying how ordinary it is than saying how amazing it is, because it is, ordinary I mean, and normal, and quiet and sensible and it works.

But people ask questions and they are interested, often they have come a very long way to be interested and Turkey can seem exotic and unusual and different so we try our hardest to answer the questions because questions deserve answers and Turkey deserves the enthusiasm we have for it.

1. Do you get homesick? Yes, I’m Welsh, the green hills of home call out to us Welsh and we get homesick no matter how settled we are. Every now and then it strikes and we want to go home to the soft mist and the headlands scrubbed by a restless sea but experience tells me it will pass and actually it is only an echo of what once was, it isn’t missing home, it’s missing a time long ago before death and life and choices made it this way. The thing I feel homesick for doesn’t really exist any more, I know that, but a passing morning of melancholy is a very Celtic thing, I think we rather enjoy it!

2. Do you miss your family? My daughter and I are always in touch, we have an ongoing conversation via Skype throughout the day and we also speak on the phone and by video. Over Skype we watch films together, cook together, chat about rubbish as well as the important stuff, this morning we were talking about the theme for her wedding and the centrepieces (fat glass jars with floating candles and pastel rose petals), the interaction never ends. We’re used to being that way, we’ve been like that a long time, and we are probably the first generation to be so consistently close whilst so physically far apart. I think that I spend more time interacting with her than if we lived in the same house and I really listen to her because I have to, most of it is written, so I have to make an effort and so does she. I do miss her but I think I know her better because we live this way. When we do meet up, which is normally twice a year, we spend three days wrapped around each other and then have a row.

3. Would you ever go home? I have a house in the UK, I try not to think about it because it makes me sad as it was our family home, my late husband and I, and so I handed it over to management agents (which turned out to be a really bad idea but that’s another story!) and am waiting out the sadness until the day comes when I can go there and be happy with the memories. But I don’t think I could live there again because I’ve changed or the UK has changed and it feels more alien to me now than here does. And the urge to explore remains, the urge to build and try harder and be better and learn more and understand other countries is still so strong. I don’t believe I could settle in the UK, not now.

4. Do you speak Turkish? I speak Turkish badly, really really badly! I learnt on building sites and in village lanes and I have a smattering of Istanbul Turkish that I learnt long ago and which makes me very polite but incomprehensible to my neighbours. As is usual I understand more than I speak and to visitors it appears that I am fluent but I’m not, I’m just used to making it work. You do absorb it if you live in an environment where it is used all the time and here in the villages there is little English so maybe I do know more than I think I do.

5. Is it expensive to live here? I don’t find it expensive. I find when I go home to the UK that I spend in pounds what I would spend in lira and that makes the UK roughly 2.5 times as expensive as Turkey to me. We’re not trying to be frugal but we have fallen into a system that seems to be relatively inexpensive and because the house is complete and has everything it needs we’re not constantly coughing up for equipment and fixtures and fittings which can sometimes lead new arrivals to believe they spend a fortune when they come here. It is all about the lifestyle though, I don’t commute so I’m not clobbered by expensive petrol costs, I don’t drink so I don’t notice the alcohol prices and I cook everything from scratch and eat out at my regular non tourist haunts (apart from fish and chips at The Salt Box and I don’t notice that is expensive). The one thing I have noticed is the price of electricity going up in leaps and bounds but even with that Aydem, the electricity provider, are introducing discounts for heavy users and that mitigates some of the increase.

6. Is it corrupt? Probably! But where isn’t corrupt! I think it just depends on your definition of corruption and corruption here has never impacted on me personally. I see cock ups, stupid stuff, money wasted on public projects that are pointless but equally I see bright ideas that make sense. It all balances out in the end. Chances are if you are asked for a bribe it is to do something that strictly speaking wouldn’t be allowed in the first place and so if you don’t plan on doing that you’re unlikely to run into real corruption.

7. Is it dangerous? Nah! What more can I say. Can’t ever remember feeling unsafe.

8. What do you miss from home? Chinese takeaways and book shops. Well I think I miss Chinese takeaways but on the rare occasions that I go home if I eat one it makes me ill because I don’t think my body can cope with monosodium glutamate and other rubbish any more. I do wish we had more choice in international cuisine though, a good Indian restaurant, a good Thai, a good French but I think it is unlikely to happen any time soon. The home grown Turkish market here on the Aegean just isn’t that interested and if you can’t interest them then you are onto a non starter business wise really. I do definitely miss book shops, sometimes I go and stand in the big book shop in the mall in Aydin just to be surrounded by the smell of books, I just wish they were in English.

9. What is the worst thing about living in Turkey? Not doing the things you think you should do! When you live somewhere like this and the majority of your interactions are with people traveling around this great big fascinating country you think you should be doing more, going to more places, seeing it all, but you don’t because you’re actually living and even with the best will in the world there is only so much you can do. We talk about popping up to Istanbul for the weekend (practically nothing with Pegasus flights), we talk about nipping down to Kas to dive and canoe at Kekova, today we were going to go to Izmir on the train and walk around the old town looking for antiques but we didn’t because we woke up and the sun shone and we drank a hundred cups of coffee and admired the roses and didn’t get round to it (we will go for a haman and a massage this afternoon though so it’s not a day totally without plans). So the worst thing is the sense of frustration that the days slip by and I still haven’t done enough.

10. What is the best thing about living in Turkey? For me, here in my little village, the best thing is balance, Turkey is balanced, it feels optimistic and friendly and sensible, far more so than home in the UK. It combines traditional values with access to modern conveniences. It has seasons that feel like they are supposed to, hot sunny summers, brisk winters. Again and again I think about the best thing and the answer always comes out as “balanced”, if that makes sense!

It is worth bearing in mind that my home is Pembrokeshire in West Wales, it’s beautiful and peaceful but it isn’t the most convenient place to live, you can’t order a meal in a restaurant after 9pm, it’s forty miles to the nearest cinema complex and five hours to a proper international airport (sorry can’t count Cardiff or Bristol, they try but they don’t actually make the grade!). If I ran out of milk of an evening it was a 24 mile round trip to pick up a pinta, my phone signal was rubbish and my broadband speed was ½ mg on a good day. My little village in Aegean Turkey is 40 minutes from an international airport, the shops only close for three hours in the middle of the night and I can walk to them, I have 7meg fibre optic internet and next week I’ll pop 12km down to Kusadasi to watch Captain Kirk sneer at Sherlock Holmes in 3D at the local multiplex. Life here is normal, but with sunshine and better food and kinder people. 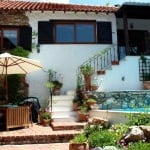