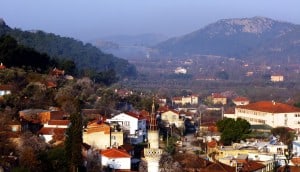 Kirazli in the spring sun

It is a warm afternoon in early April, the guests have gone to be amazed by Ephesus, Nick is having his afternoon nap and I’m lying on the cushions beside the pool with my eyes shut against the stabs of sunlight cutting through the occasional big fluffy cloud.

Village life goes on around me and the sounds drift over the courtyard wall.

Yusef, my neighbour, is singing. He is sitting in his garden, convalescing from a serious illness that saw him hospitalised in Aydin and Izmir over the winter. They brought him home last week and he sat and looked at the mountain he never thought he would see again and he cried. Now he is sitting in the spring sunlight and singing, quietly, one of those low, lilting, old songs that bring to mind the silk road and the journeys of the Turks. I don’t understand all the words but I pick out “travel” and “road” and “tonight” and the song feels like home at the end of the road.

I hear the throaty buzz of the bees working in the wisteria and the call of birds; the thin high flute of the swallows feeding in spirals about the mosque and the sudden aggressive bickering of the house sparrows in the courtyard and their fluttering fights as they stake out their territory.

There is the cough and splutter of the neighbours tractor starting, the swish wack of a carpet being beaten down the road and the faint tinkle of the bell on Emma’s collar as she rolls over on the hot bricks of the courtyard and stretches in the sun.

Yusef’s wife comes home and he breaks off singing, I hear her fussing over the goat kids, giving them hearty pats and congratulating them on being beautiful and strong!

There is a fat thump and grunt as Evils drops down off the courtyard wall and then the buzz saw purr next to my ear as he clambers onto the cushion and starts treading pennies to make a comfy place to sleep.

Then there is nothing but the sound of the wind in the pines and I’m half asleep, with the sun on my face, until the click of the mosque speakers followed by the careful clearing of the throat as the imam prepares to make the call to prayer reminds me I really should be doing something more constructive than just lying here listening to the village, but there is something so very comforting in listening to the lives around me.