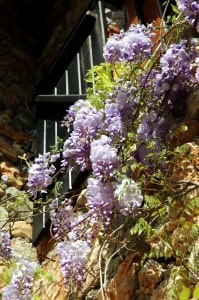 I am not a great gardener but I know what I like; I like my garden filled and rambling, with plants clambering up walls and spilling out of containers and twined around railings. Back home in Wales with a 1/3 of an acre of garden to fill it was a hopeless task, we could lose a kings ransom of plants in a corner and my husband hated the whole house smothered with climbing plants thing and used to mutter about guttering and wood lice if I tried to train something up a sometimes sunny wall.

I was an impatient gardener then, I wanted instant garden, instant height, instant maturity and I was always disappointed.

Here the climate is kinder, much kinder (have you ever seen a wisteria grow 11 inches in day!) but it still takes time and now after six years I am starting to get the garden I wanted and I have learnt to be patient and along with the patience came love for the plants that made it through and did their best and grew up for me. 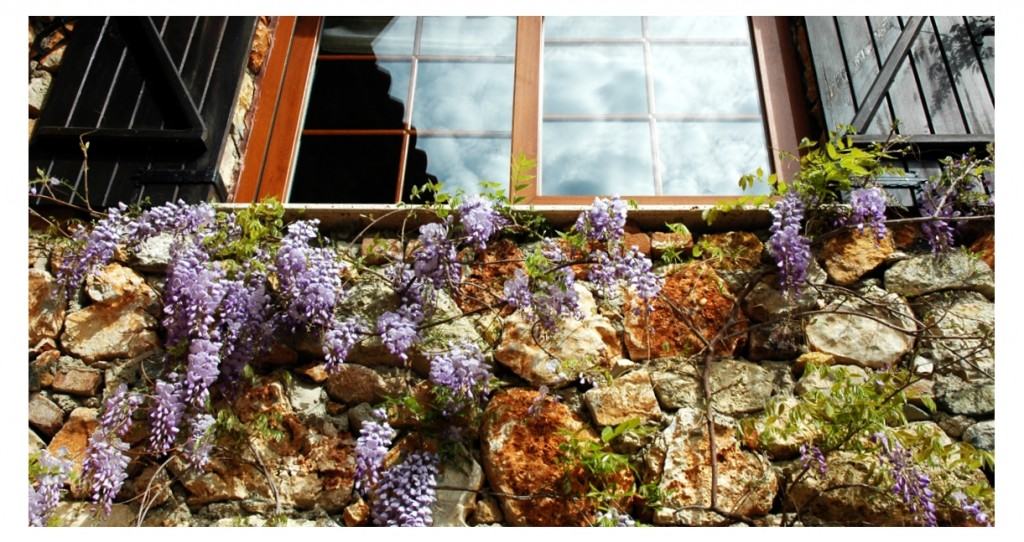 The wisteria took years to establish. The first year after I plant a wisteria it grows like a rocket, full of energy from the greenhouse feeding and finally free of the binding pot it comes in it tends to riot up the wall. It then takes a bit of a break and kicks back for a couple of years, flowering briefly and thinking about the future. During this time I normally manage to confuse the poor thing by wrapping its growing tendrils the wrong way round the support wires and it has to spend six months growing out of my errors! Wisteria can tell its left from its right, I can’t. After about four to five years it generally perks up and gets on with the wall of flowers in spring thing. 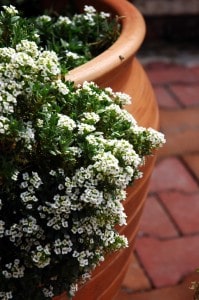 Alyssum, self seeded and flourishing

The alyssum that I planted years ago has now self seeded and turns up all over the garden and between the cracks in the courtyard pavers, as do the poppies, orange ones and white ones, because a few years ago I threw down a thousand seeds and the children that survived have spread and crept into various borders and colonise the dry front border before the lantana grows out of its winter sleep and hides them. 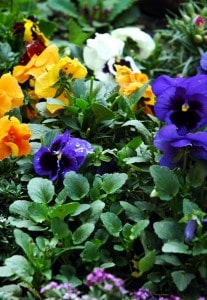 The pansies, flowering on through spring

The borders are the bane of my life, the dogs have never quite got it through their heads that it isn’t their summer bed and they periodically dig it up. The plumbago survives because it takes a direct nuclear strike to kill plumbago and the aloe vera makes it through such attacks by being viciously armed but the lavender struggles and the carnations suffer. I resort to pansies, they survive the winter rains and sudden cold spells and if you deadhead them they endure and keep on flowering into summer.

And then we have the roses that year by year work their way along the railings that top the courtyard wall, yellow roses for the broken heart, pale pink wild roses for the joy of life, some years they struggle, exhausted by exuberant spring flowering and worn down by the endless sun, but they always come back, try again, grow again, gain a few more inches along the railings. I’m quite attached to my roses. 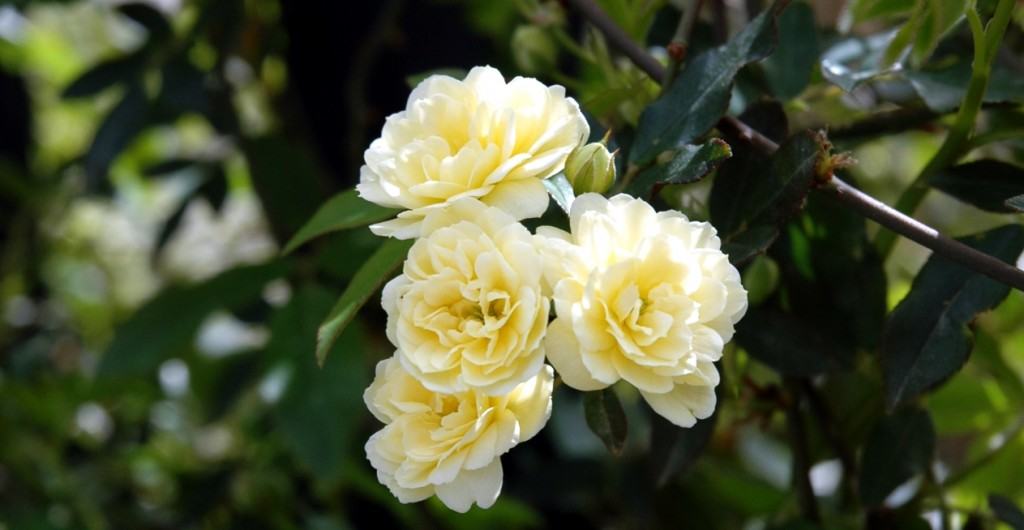 Rambling along the railings

A garden in Turkey is like a garden anywhere, you have to learn what it likes and what it doesn’t. We can grow bougainvillea but most other properties in the village struggle with it, we don’t have quite the right climate for it to flourish. I can’t grow chrysanthemums but everyone else has bucket loads of them. I have also managed to make some strangers to these shores flourish, I have sweet peas and herbs like Italian basil and my coriander is now all over the garden, growing in various pots.

I’ve come to the conclusion that the plants that flourish in Turkish gardens do so because of a benign neglect and a slow heart. These things take time, the gardener’s hardest lesson, and I need to take the long view and remember when I plant a garden that in ten years it will all be lovely and in fifty years it will be just about perfect.